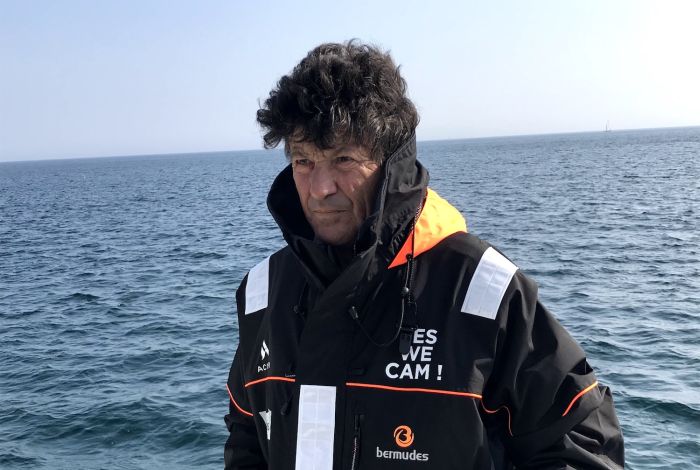 Since early April, Jean Le Cam has done a lot of sailing aboard the IMOCA on which he won the Barcelona World Race (in 2015 with Bernard Stamm) and finished in sixth place in the Vendée Globe (in 2017). Currently busy sailing from port to port between Genoa and Calais, Jean will be decorating his boat in the colours of Corum L’Epargne, Nicolas Troussel’s partner, for the Transat Jacques Vabre. At the same time, Le Cam is looking for funding to be able to compete in the Vendée Globe next year. He has lined up for every edition of the race since 2004.

Jean Le Cam is back

“There’s no stopping. I am out on the water practically every day and clocking up the miles,” he explained. “On 2nd April, I set off with Nicolas Troussel to sail from Port-la-Forêt to Genoa, which enabled us to qualify for the Transat Jacques Vabre. I then started a long journey around Europe from Genoa to Calais via Cannes, Marseille, Port-Camargue, Barcelona, Cascais, Porto, Bordeaux, La Rochelle, Les Sables-d’Olonne, Nantes, Brest, Saint-Malo and Le Havre. This project in conjunction with a partner (La Famille ibis), will enable me to gain some more experience and check out all the settings.”

Le Cam/Troussel paired up for the Transat Jacques Vabre

After this experience around the coast of Europe, Jean Le Cam’s IMOCA will be taken out of the water (on around 10th July) and decorated in the colours of Corum L’Epargne, Nicolas Troussel’s partner. “Nicolas is currently having a new IMOCA built and before the launch, we need to train for the Vendée Globe,” explained Le Cam. “My IMOCA was available, so that worked out well. It also allows me to take part in my first major race since the Vendée Globe, making improvements to the boat, in particular offering her new sails. Everyone’s a winner like that. I know Nicolas well. He’s a great guy. You can’t imagine finding anyone better to pair up with.” The pair are not going to be competing in the Rolex Fastnet Race (start on 3rd August) as the boat is not due to be relaunched until early September. “There won’t be any foils on my IMOCA. Our aim in the Transat Jacques Vabre is to race against the boats with straight daggerboards from the same generation,” added Jean.

While he has no worries about competing in the Jacques Vabre, Jean Le Cam needs to set about the task of finding partners for the next Vendée Globe, which starts in less than eighteen months from now on 8th November 2020.

“For the moment, it’s not looking great. I only have a small part of the funding I require. With my background and reputation, I can’t understand why. It’s true that I’m not a great salesman. In 2012 and in 2016, I found the funding at the last moment. I’m getting used to that, but it’s exhausting,” admitted Jean. “The general idea is to set off with a boat, ‘Yes We Cam’ with the support of five or six partners. But if a sponsor turns up with the whole budget and wants to give his name to the boat, that too is possible.”

For Jean Le Cam, being at the start of a fifth Vendée Globe in a row is something that seems natural. “I love this race, as it is different each time. You never go through the same things twice,” he said. “In 2020, it’s going to be fantastic race, as it is each time, especially with eight brand new boats lining up. When you see the speeds they are forecast to reach, it’s scary. Finishing sixth like last time would be an unthinkable performance. I think there will be around ten boats without foils lining up. I would like to be the first to finish in that group. That’s the unusual sporting challenge I’m giving myself.”