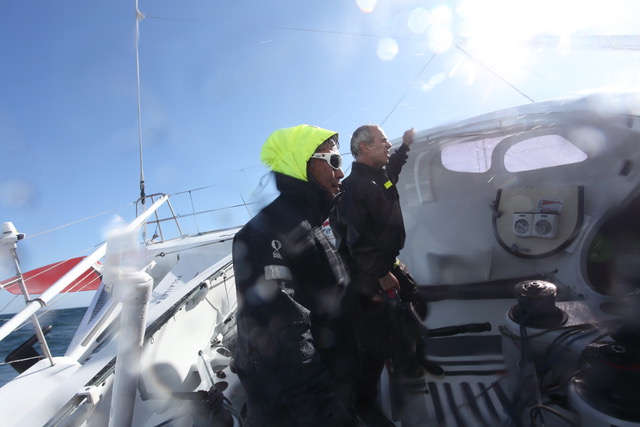 He was one of the stand-out figures in the 2016 Vendée Globe, and the first Asian competitor to take part in the headline event on the IMOCA circuit, but Kojiro Shiraishi was forced to retire after dismasting.

The Japanese sailor would like to finish the job and will be trying his luck again in 2020 with a brand new boat, DMG Mori, a VPLP designed boat, which is due to leave the Multiplast yard in September. Meanwhile, Kojiro is learning about foilers by following a training program organised by Roland Jourdain for two months aboard Morgan Lagravière’s former Safran.

What led you to return to the IMOCA circuit and in particular the 2020 Vendée Globe?

“Because I was forced to retire from the 2016 Vendée Globe 2016 and I want to finish what I started. It was a huge honour to be the first Asian to compete in the Vendée Globe. Now, I want to become the first to finish it. It’s the only race that strengthens my resolve and pushes back my limits.”

What are your memories of your first attempt at the Vendée Globe in 2016?

“They are fantastic, even if I was forced to retire after dismasting. It was a challenge taking part in the Vendée Globe with such little preparation. This experience has enabled me to progress. I made lots of great friends and I really loved the way that all my fellow sailors welcomed me in the IMOCA circuit. Let’s hope that other Asians will join the IMOCA class”

What impact did your project have in Japan, where ocean racing has not yet really developed?

“Before competing in the Vendée, few people knew this type of race existed. I managed to spotlight this fantastic event and more generally the world of ocean racing. That enabled me to find a new sponsor, DMG Mori, but also to build up a new team of youngsters with Simon Suzuki and Federico Sampe, who were part of Kaijin Team Japan in the campaign for the Youth America’s Cup. They are very young and really want to work on my project.”

Do you think that other Japanese sailors (or indeed Asian sailors) may be interested in joining the IMOCA class?

“I believe so. There are already these two youngsters who are working with me on the Vendée Globe campaign. I also know a Japanese sailor, who is trying to take part in the next Mini Transat, Masa Suzuki. So let’s hope that one day, other Asians will join the IMOCA class.”

Why did you decide to build a sistership to Jérémie Beyou’s Charal?

“Charal’s molds were available at the moment when we started work on the construction and we had the possibility of hiring them. In our opinion, that was the best solution to stick to our training schedule leading up to the next Vendée Globe.”

We have seen that Charal is an extreme boat. How will you prepare yourself for this new way of sailing at high speed?

“Since early February, we have been training in Cascais in Portugal on the former Safran with Roland Jourdain. This training will continue until late March and we will try to continue to sail in France. This is a great opportunity to find out about foilers and the way to sail them.

“It’s useful so that things will start to fall in place automatically on such a powerful boat and it is a huge honour to work with a sailor with such a global reputation. On my new boat, the foils will be different, but the mast and keel system the same, as they are one-design elements. We want to build a powerful IMOCA, but above all we want her to be simple and reliable.”

How far have you got with the construction of your new IMOCA?

“Things are advancing. This is the first time I have built a boat from scratch. It’s fascinating to watch her take shape. The boat is due to be launched in September.”

What is your program going to be between the launch and the 2020 Vendée Globe?

“We will be attempting to take part in the Transat Jacques Vabre at the end of the year, then in 2020 in The Transat and the New York-Vendée. There will be a lot of training on her to get to know the boat and test her as we move towards the Vendée Globe.”

Do you know with whom you will be competing in the Transat Jacques Vabre? What will you be aiming for in this race?

“I’m still thinking about my choice of co-skipper. The aim won’t be to push the boat hard, but to sail her safely to the finish. Particularly as to qualify for the Vendée Globe, I need to finish the race. That will therefore be the main goal in the Transat Jacques Vabre.”

What has happened to the boat on which you took part in the 2016 Vendée Globe? Has she been sold?

“Spirit of Yukoh has been up for sale for several months. We have been in serious talks with a skipper whose name I cannot reveal. I hope to be able to sell the boat rapidly and then focus entirely on the next Vendée Globe.”