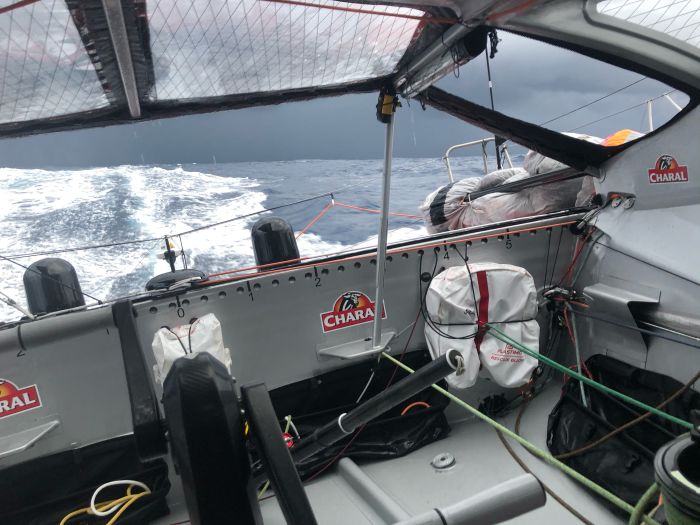 It is patently obvious now to everyone that Charal is very fast and is setting an incredible pace at the front of the IMOCA fleet in the Transat Jacques Vabre. Since passing the Cape Verde Islands, when they were tacking alongside Apivia, the double-handed crew aboard Charal has continually accelerated, widening the gap to 120 miles today over their nearest rivals.

After nine days of racing, the leaders in the Transat Jacques Vabre are getting ready to enter the Doldrums, the infamous Inter-Tropical Convergence Zone that is so feared by skippers due to the great instability of the weather. Dominic Vittet, weather strategist and router for many sailors, gives us his analysis of the situation on Tuesday 5th November.

Dominic Vittet: “Charal has been able to reap the benefits of having a year more to prepare than the other new generation IMOCAs. We have been able to see that the red and black foiler was not necessarily faster than the others at the start of the race in conditions that were not favourable for the foilers. However, once she was reaching, Charal has been able to extend her lead, in particular over Charlie Dalin and Yann Eliès on Apivia between the Cape Verde Islands and the entry point into the Doldrums.

“We can also see that 11TH HOUR RACING (the former Hugo Boss) sailed by Charlie Enright and Pascal Bidégorry is a notch below them. It can be seen that the modified boats have not really been able to keep up with a well-tuned new foiler. Charal is therefore very fast, but she also sails better downwind in winds that are not too strong, which means she has been able to avoid all the gybes that some others have been forced to carry out.”

“Jérémie Beyou and Christopher Pratt will start to feel the effects of the Doldrums today and the pace should slow a little. The Doldrums stretched out quite some way over the past few days, but is expected to shrink in the coming days, which should favour those chasing them. After that, Charal will have to look ahead to the St Helena High, pick up the SE’ly trade winds, which will back easterly and then NE’ly. It will then be full steam ahead again reaching after the Equator in ideal conditions for a high speed run down to Salvador da Bahia. It is likely that the winner in the IMOCA category will cross the finishing line on Friday or Saturday morning.”

A strong from the non-foilers

“Some of the IMOCAs without foils have had a very good race, such as Banque Populaire (4th), Corum L’Epargne (8th) and Groupe Apicil (9th), as they have managed to keep up a very steady pace racing ahead of some of the foilers. Jean Le Cam and Damien Seguin, and not forgetting Armel Le Cléac’h know their boats perfectly and are managing to get 100% out of them. Conditions at the start of the race may not have been very favourable for the foilers, but it is nevertheless surprising to see these boats in the Top 10.”

What can we learn from this race?

“The race has been very interesting as the skippers do not all have the same goal. Their strategies have therefore been drawn up differently to match their objectives. While Charal wishes to assert herself as the one to beat, confirming that she is the favourite, for some of the others, it has been more about qualifying for the Vendée Globe. Some boats therefore chose the easterly option, in order to make sure they finished the race and scored some valuable points for the IMOCA Globe Series Championship.

“Some others, like Hugo Boss, Maître CoQ, Bureau Vallée, Malizia 2, Prysmian Group and Advens allowed themselves to head west. That was a brave choice, which may have paid off, as in the end, the leaders in the group that went west are not very far behind.

“For others, this transatlantic race was a way to allow them to measure up against other boats after the Azimut Challenge (Initiatives Cœur, PRB, MACSF,…).

“To finish, we should note the excellent performance by Thomas Ruyant and Antoine Koch (Advens for Cybersecurity), who managed to get right back in the race and are now only just thirty miles from Arkea-Paprec.”