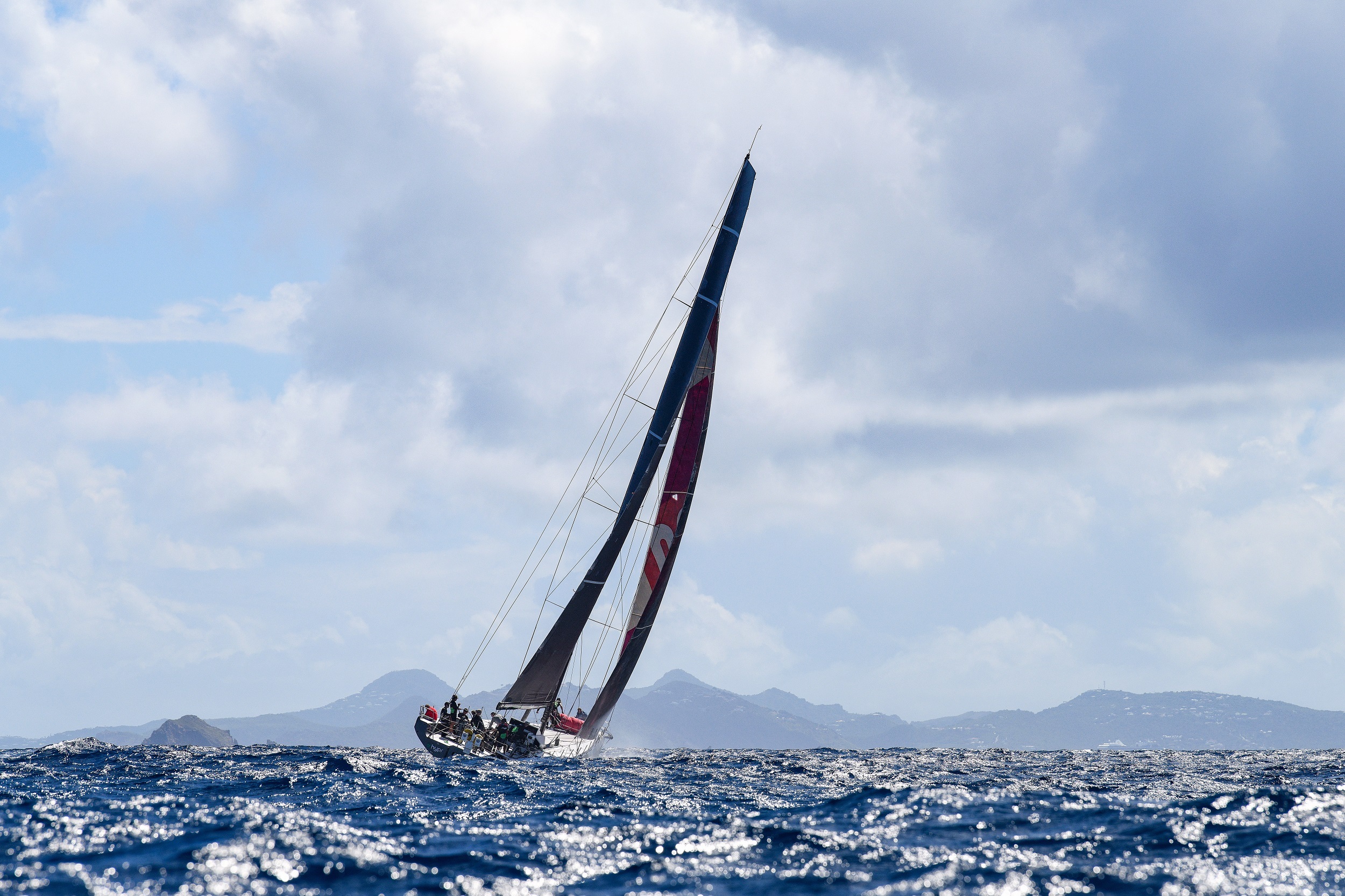 Racing is due to take place over four days, from Thursday 3 March concluding on Sunday 6 March, on the waters off St Maarten and between the Franco-Dutch island and its glamorous neighbour, Saint Barts.

Among the competitors is a strong line-up of 60+ft maxi yachts with 10 entered in the CSA 1 class, three more in CSA 3, two in the ‘Island Time’ PY class and another pair of multihulls.

The heavyweight bout this time will be between the much campaigned Farr 100 Leopard 3, with its usual crew of ex-Volvo Ocean Race and America’s Cup stars led by skipper Chris Sherlock, and Wendy Schmidt’s much newer Botin Partners-designed 85 footer Deep Blue. Following her participation in the RORC Caribbean 600 Leopard 3 currently lies fifth in this season’s four event IMA Caribbean Maxi Challenge, while Deep Blue will be getting her first points on the board.

This will be Deep Blue’s first ever race in the Caribbean after making her racing debut in the Mediterranean last season, but her owner and crew are St Maarten Heineken Regatta regulars. “As a team we have probably done five or six, but most of us have done almost 10 in total – it has always been one of our favourite events in the Caribbean season,” says Deep Blue’s tactician and project manager Rob MacMillan.

“It is super-exciting to get back here. It has been forever since we have been together as a team after a couple of complicated years and it is our first regatta on Deep Blue in the Caribbean, which we are pretty excited about.”

So what stands out about the event? “St Maarten Heineken Regatta has always been a great combination of a great party; great sailing; great breeze; great water; great atmosphere in the group here,” MacMillan continues. “It is a cool mix of maxis and cruiser-racers and bareboats. It is a wild scene out on the water. It has always been a kick-off of sorts of our Caribbean season.”

Schmidt’s team returns to St Maarten having won the Maxi class competition when they were last here in 2019 aboard the Swan 80 Selene. The maxi competition looks set to be hotter this year. “It is nice that we’ll be racing against Leopard and some of the VO70s and 65s will be a good challenge for us as well,” concludes MacMillan. Leopard 3 has a waterline length advantage, but Deep Blue is a newer, more thoroughbred racer.

Competition between the former VOR boats is especially strong. In fact, aside from Leopard 3 and Deep Blue 3, they account for the remainder of CSA 1, comprising four VO65s and four of the older, but equally competitive, VO70s. Remarkably four of these eight are Polish, continuing the Baltic state’s strong seafaring tradition.

Among them is Sailing Poland which currently holds second place in the IMA’s Caribbean Maxi Challenge. However following the RORC Caribbean 600, the VO65 is now back with owners Marcin Sutkowski and Robert Gwózdz and their team, including Volvo Ocean Race legend Bouwe Bekking and Danish three time round the world race competitor Jens Dolmer.

Also on the starting grid is the Polish National Foundation’s striking red and white VO70 I Love Poland (ex-Puma). Skippered by Grzegorz Baranowski and crewed by a group of young Poles, they currently lie fourth in the IMA Caribbean Maxi Challenge. Then there is the VO65 Sisi, skippered by Polish match racer Przemyslaw Tarnacki and the VO70 Ocean Breeze (ex-Telefonica Blue), led by former Vendée Globe skipper Zbigniew ‘Gutek’ Gutkowski.

Many of these ex-VOR boats enter Caribbean regattas with a ‘pay to play’ crew. Among them few are as hard-working as Kees-Jan Bos’ VO70 HYPR (ex-Camper), which has an intense program over the next 12 months spanning the Caribbean, Mediterranean and Baltic before heading south for the Cape2Rio race.

“We offer clients the ‘Volvo experience in all the major sailing events in the Caribbean and Europe,” says HYPR’s skipper Jens Lindner of their business. While it is the HYPR team’s first participation in St Maarten, Lindner has competed here many times before. “It is really nice, because there are many big boats – maxi yachts and Volvo boats competing. Among the VOR boats we all have a similar speed.”

Deep Blue’s Rob MacMillian agrees: “It is great: I think more maxis should come across to race in the Caribbean. It is one of the best places on earth to sail. The more sailing done here, the better. It is great the maxi class [IMA] has come together so that we can all be in the same place at the same time and have great racing. It seems like the level of racing is really high in the maxi class and we are really pleased to be part of it.”

For more information on the International Maxi Association, see: www.internationalmaxiassociation.com