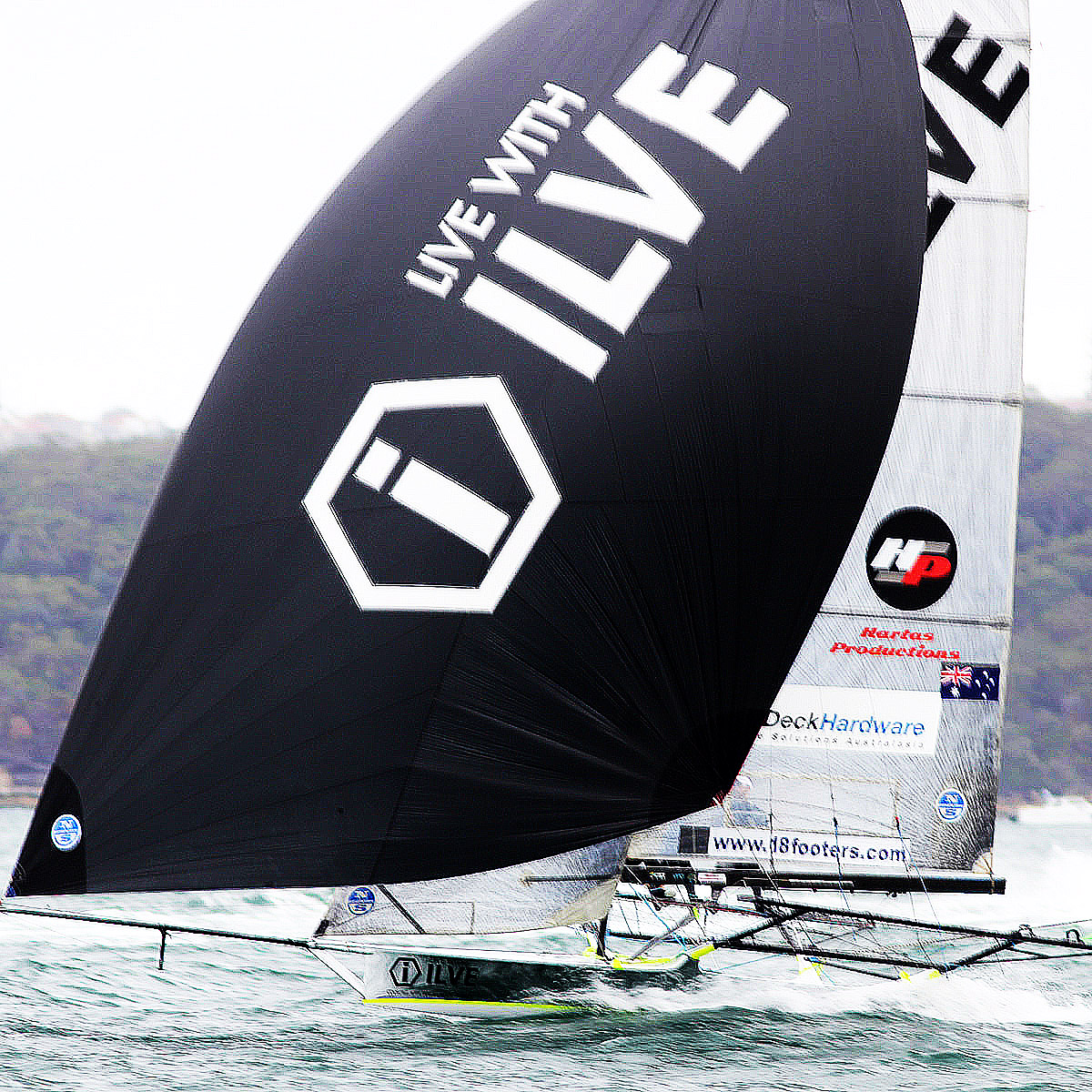 06/11/2017
Race 5 of the Australian 18 Footers League's Spring Championship produced the fifth different winner when Ollie Hartas, Pedro Vozone and Rob Polec brought ILVE home a 23s winner on Sydney Harbour today.
The ILVE team had to come from behind to grab the lead at the final set of windward marks then hold off the former world champion SMEG team of Lee Knapton, Moke McKensey and Ricky Bridge. Appliancesonline.com.au (Brett Van Munster, Phil Marshall and Nick Hord) was a further 58s back in third place, just ahead of Jordan Girdis' Panasonic Lumix, Finport Trade Finance (Keagan York) and Noakesailing (Sean Langman).
With just two more races to be sailed in the championship (after each team drops its worst performance so far), Finport Trade Finance leads the points table on 15 points, followed by Panasonic Lumix on 18, Appliancesonline.com.au also on 18, Yandoo (John Winning) on 20, Smeg on 20 and Rag & Famish Hotel (Bryce Edwards) on 21.
For the third time in the championship, the race began in a light Easterly breeze under a dark, cloudy sky.
Smeg dominated the start with a brilliant pin end move which saw the team quickly open up a lead over Quality Marine Clothing (Aron Everett), Finport Trade Finance, ILVE, Triple M (James Ward) and Appliancesonline.com.au.
The set of 3-buoys windward marks in Rose Bay came into play when Quality Marine Clothing grabbed the lead from Smeg as spinnakers were set for the run to the wing mark off Clark Island and the bottom mark at Kurraba Point. Finport was next, followed by Triple M, ILVE, Noakesailing, Appliancesonline, Panasonic Lumix and The Kitchen Maker (Stephen Quigley).
Quality Marine Clothing extended her lead to 1m at the wing mark and retained the lead at the bottom mark before a 15-knot squall hit the fleet as the latter boats in the fleet approaced the mark.
The more experienced Smeg crew put pressure on the Quality Marine Clothing team and only five boat lengths separated the pair when they tacked off Double Bay.
In the meantime the breeze went left and now Finport was the new leader ahead of Triple M,  Quality Marine Clothing and Smeg were relegated back into third and fourth places respectively.
The breeze was soft again as the leaders approached Rose Bay and a new leader emerged when Noakesailing gained the red buoy advantage to lead from Triple M, Smeg and ILVE.
On the long spinnaker run from Rose Bay to Kurraba Point, Triple M held the lead from ILVE while Appliancesonline was third ahead of Smeg.
AOL and Smeg were higher than the two leaders, so when the breeze shifted again it heavily favoured them over Triple M and ILVE. The four teams went around the bottom mark with only 5s separating the four skiffs.
Smeg took the lead for the final windward leg back to Rose Bay but was going to have to go to the furthest (white) mark while ILVE, which was pacing it with the champ.
If ILVE could maintain her position to the Rose Bay 3-buoys it was likely to favour her more than Smeg and set up a close race to the finish.
Both teams went around their respective marks at the same time which effectively gave ILVE a lead of about 25s and a great chance for victory.
The less exterienced ILVE team sailed faultlessly on the spinnaker run to the finish line off Clark Island and gave the series its five different winner and a great finish over the next two weeks.
Race 6 of the Spring Championship will be sailed next Sunday, 12 November. Race 7 (last race of championship) will be sailed on Sunday, 19 November. The Australian 18 Footers League Spectator Ferry will follow all the action, leaving Double Bay Public Wharf on both days at 2.15pm. There will be Live Streaming of the races via www.18footers.com
– Frank Quealey, www.18footers.com