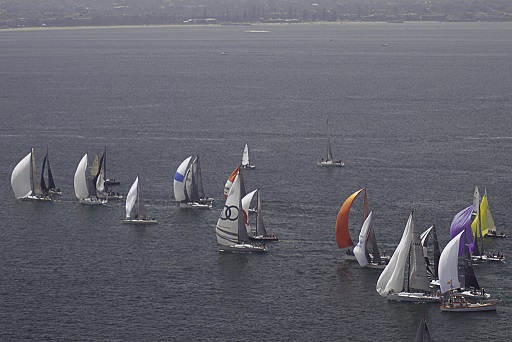 A downwind start for the 2016 Lipton Cup. Photo Bernie Kaaks.

A countback was needed to determine the winner of the Lipton Cup for 2016 when Bruce McCraken’s Beneteau First 45 and Rod Warren’s J111 both ended the series on nine points. McCraken’s Ikon won the countback and with it, the Cup.

Light winds persisted throughout the two days, requiring a one hour postponement today. Regatta PRO Dave Leroy, already considered somewhat of a magician because of his uncanny knack of predicting when breeze is going to arrive, did his reputation no harm at all after his confident one hour call. A light southerly swept across the course about five minutes prior to the warning signal and all fleets were able to enjoy the traditional “long race” that ends the series.

Division A IRC was a cliffhanger. Joust finished the first day at the top of the IRC table with six points, two clear of Ikon, but the First 45 revelled in the light conditions, stayed out of trouble and managed to finish two places clear of Joust to level the scores. With two firsts to its credit, Ikon won the countback.

The Division A AMS result was the most decisive in the regatta. With sailing photographer Teri Dodds on the bow, Geelong’s Thompson 9.2 Poco Loco posted four wins from four starts. They enjoyed great racing with the Melges 32 PP1 which carried a harder AMS rating. Under performance handicapping however, PP1 turned the tables by forcing Poco Loco into second place.

Max Peters’ Adams 10 Top Gun was the best of the B division, taking first place on both IRC and AMS, ahead of Rob Date’s Scarlet Runner. Mainstay was best on PHS.

The S80 Gravitas won division C on both PHS and AMS, but since the boat has no IRC rating, Up n Go won the IRC trophy.

It seems that most large regattas find that their largest fleets are “cruisers with spinnakers”. It was certainly the case in the Lipton Cup once again, attracting a wide variety of yachts, many of which are quite at home in regular racing fleets. Competition was tough, from the fight for line honours, to the quest for handicap results, to some frenetic mark roundings and the boats who took home silverware thoroughly deserved their place. Tony Johnson-Sneddon’s First 40.7, Storm, won the AMS trophy ahead of the First 31.7 Vitesse, but Vitesse won the PHS trophy from Gary Prestedge’s One for the Road, with Storm in third place.

Penfolds Motor Group continue to provide wonderful support for the Lipton Cup, supported by a host of additional sponsors including Musto, Doyle Sails, Oatley Wines and Nautilus Marine, while on the water the combined resources of the RYCV, Hobsons Bay Yacht Club, Port Melbourne Yacht Club and Williamstown Sailing Club made this regatta work for yachts ranging from a TP52 down to Lasers.

After investigating a scoring enquiry received on Monday, the Royal Yacht Club of Victoria conducted a review of Race 1 of the Lipton Cup Regatta. As a result of that review, the finish time of Jake was altered for race 1, and there was a net effect. The final points for Joust were altered to 8, while the final points for Ikon remained on 9 – making Joust a clear winner by one point. Needless to say, the racing was very close. Following the review, we have a new winner of the Lipton Cup Trophy – Rod Warren’s Joust from SYC.

While the error was unfortunate, RYCV have acted with the utmost haste to rectify the situation.