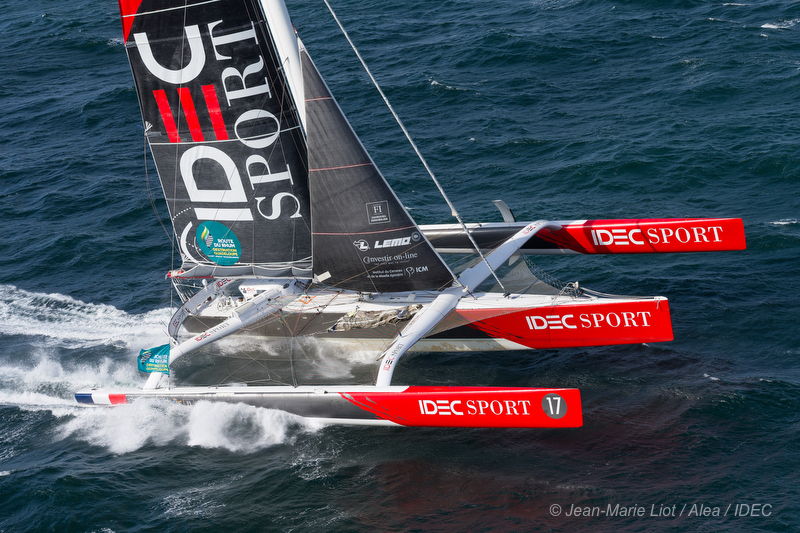 Francis Joyon is sailing day after day clocking up more than 600 miles averaging over 26 knots. In spite of being some way from the direct route off Brazil, the IDEC SPORT maxi-trimaran is today (Monday) 266 nautical miles ahead of the record he is attempting to beat.

What is there left to generate emotions for Francis Joyon, the sailor who has held all the solo and crewed sailing records? A sunrise or sunset under the Equator, a giant trimaran, speeding along on calm seas in steady winds, the open spaces of the oceans? Yes, indeed.

As for extending his route by a few hundred miles on this record attempt, that is no problem for him. Francis calmly accepts the prolonged journey aboard his IDEC SPORT maxi-trimaran off Brazil. The bearing taking him close to the coast of Brazil was part of his meticulous plan developed with his on-shore router, Christian Dumard. Francis is doing better than just holding on. He is getting it just right in terms of speed in this pleasant stretch of the voyage to the Indies.

Francis is taking advantage of some excellent sailing conditions to get the most out of his trimaran that he now knows by heart and obeys his gentle touch. His lead over the progress achieved ten years ago aboard the second IDEC has fallen from 427 miles at the start of the weekend to a mere 266 at lunchtime today. This is all very relative, as out on the water, Francis has headed 650 miles further south in latitude. The light airs to the west of the St. Helena high explain this long trip via the west. Francis will be continuing with this long route for at least two days, before hopping onto the front of a low-pressure system forming to the south of Brazil, which will allow him to sail at speed downwind towards the tip of South Africa.

“I took advantage of the weekend to get some rest”

“I’m in good shape and took advantage of the weekend to get some rest.” It sounds like a worker benefitting from a short break before going back to work on Monday, but this was what Francis Joyon happily told us, as he enjoys this attempt to smash his own Mauritius Route record.

“I’m in good trade winds, which are very stable and on calm seas. These are rare and ideal conditions to sail quickly without putting too much pressure on the boat. This route is not that extraordinary. This is the route taken by the big sailing vessels, which had to deal with low-pressure systems like me off the south of Brazil to cross the South Atlantic towards the Cape of Good Hope. I’m prolonging the route a bit but am sailing fast. Conditions mean I can trim the boat perfectly. I can say that I’m getting the maximum from the boat without punishing her. I’m spending some time at the helm in the morning, at noon, in the evening and at night.”

IDEC SPORT will be continuing on this route, which is a bit off the beaten track, heading SW away from the direct route. The giant is going to have to deal with a transition phase when the trade wind dies away before the low deepens off the Bay of Rio. IDEC SPORT will gradually swing her bows around towards the East and Francis will get back to the usual route ahead of a low, as he makes his way towards the famous Cape of Good Hope…