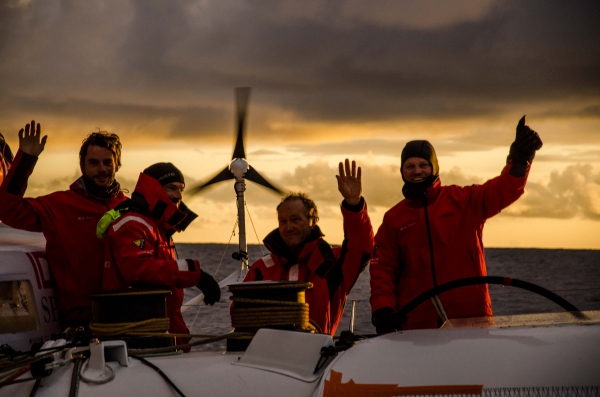 In a light, the like of which you don’t find anywhere else, surrounded by albatrosses, the big, red multihull made her way back into the Atlantic, leaving the desolate Southern Ocean in her wake and in so doing was very close to the intermediate time for the Jules Verne Trophy record set in December 2011 by Loïck Peyron and his crew of 13 on the maxi-trimaran, Banque Populaire V.

Rather like in the Indian Ocean, in the huge Pacific, IDEC SPORT switched between long periods of high speed sailing and time-consuming transition zones, often far away from the most direct route. It is almost as if the counter has been reset to zero as they start this final chapter in the Atlantic. Joyon and his friends are still in with every chance of rivaling the Jules Verne record to the finish, meaning that the crew is determined to fight hard all the way to the end.

“We had to fight hard to get to the Horn tacking downwind in light winds below the coast of Chile,” explained Francis Joyon, now fully concentrated on the strategy required in the climb back up the South Atlantic.

“We took some time out to celebrate that in fitting style,” added Clément Surtel, over the moon after his first experience of the Horn, a moment, which is important in every sailor’s life.

Guéno Gahinet, the youngest crewman, did not disagree. For him this was a childhood dream come true. He stood there with his eyes popping out admiring the magnificent sight of the Andes. “I didn’t think there were so many little islands hidden away down here around Tierre del Fuego. It’s fantastic!” Boris Herrmann added, “This is my fourth time. Probably the finest aboard an amazing boat and in really good company.”

As a reward after this hard work, the wind, which was blocked by the mountains for so long, finally appeared to greet the troops. So it was that in spite of the nasty choppy seas, IDEC SPORT left Staten Island to port at thirty knots. The race against the clock continues with the battle raging.

In this part of the voyage, their virtual rival, Banque Populaire V, was fast, so aboard Idec Sport they are reacting with a daring strategy between the St Helena high and the areas of low pressure moving away from Argentina.

“We have given IDEC SPORT the nickname of ‘30 knots or nothing’ ” joked Joyon, because the former Groupama 3, fitted with her short mast designed for solo sailing, is proving to be efficient in strong winds, but less at ease in light airs. IDEC SPORT is therefore heading east to look for more pressure, while trying to avoid having to sail too many extra miles. “Before the start, we would have been pleased with the time it took us to reach the Horn,” Francis reminded us. “It means we are still in with every chance of beating the record.”