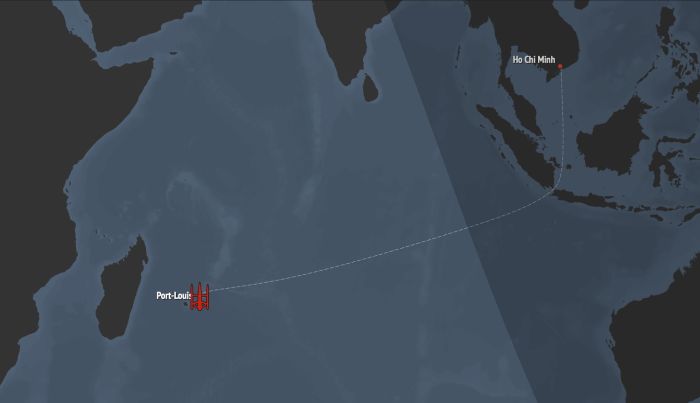 That is how Christophe Houdet, Francis Joyon’s faithful friend and one of the crew of four aboard IDEC SPORT for the ASIAN TOUR, described the situation. Slowed down to horribly low speeds yesterday and completely stopped for around seven hours after six days of high speed sailing towards the southern latitudes, the giant trimaran has since then recovered and is racing again across the desert that is the Indian Ocean.

After being completely alone in the middle of nowhere, the men on IDEC SPORT are getting ready to face the exact opposite as they approach the coast and the islands of Indonesia. From Friday onwards, IDEC SPORT will be in the heart of a whirlpool of activity, with her crew remaining cautious yet amazed by the sights around them over the final 1000 miles in the China Sea before they reach Ho Chi Minh City.

“I have rarely seen such a millpond,” said Francis Joyon talking about his sixth day at sea, when the wind just vanished. “Usually, we manage to keep going this way and that at 3 or 4 knots, but for more than seven hours, the boat was literally stuck in one place pushed about by a slight swell. We weren’t worried however, as we knew we were in the right place on the edge of the centre of high pressure and gradually the wind returned as expected. We took advantage of that to dry everything that got wet when around 500 litres of water suddenly burst into the central hull.”

Heading for the Sunda Strait

IDEC SPORT is heading due north towards the Sunda Strait, which marks the entrance to the China Sea.

“Conditions are good although not the best,” added Francis. “There were a lot of squalls last night with some powerful gusts, which menat we had to carry out manoeuvres all the time going from the gennaker to the J1 and back and we had to trim continually. The wind went up and down between 16 and 22 knots. We are keeping up speeds of between 28 – 30 knots.

“These conditions are expected to last until we reach the islands of Indonesia.”

Having already sailed more than 3200 miles in six days averaging more than 22 knots, Joyon and his men are now less than 2000 miles from their destination. They should be able to sail between Java and Sumatra on Friday morning and then enter the China Sea, the final portion of this new record between Mauritius and Vietnam.

Java and Sumatra lie ahead of the bows of IDEC SPORT. Names that evoke historic voyages of the past. Fans of naval history, sailors and explorers, Christophe Houdet and Francis Joyon are getting close to the legendary seas that they have dreamt of.

“The French East India Company, the voyages sailed by Portuguese and Dutch sailors, the big race… We are living a dream,” admitted Francis.

“This route is magical and it is a huge privilege and pleasure to be following in their footsteps aboard this extraordinary trimaran,” declared Christophe Houdet.

“We have another 24 hours to enjoy this with some pleasant and easy sailing,” he explained. “After that, the final section of our voyage will offer us a very different situation. When we go through the Sunda Strait, we will be entering a different world with countless islands and a huge amount of shipping. We can’t wait to discover these delights, but are a bit worried too.

“Finishing off the Cochinchina region of South Vietnam looks particularly testing with some strong winds generated by the NE monsoon.”

A voyage of discovery, an air of exoticism… the IDEC SPORT maxi trimaran and her crew are getting ready to leap into the mysteries of the Orient in this IDEC ASIAN TOUR.