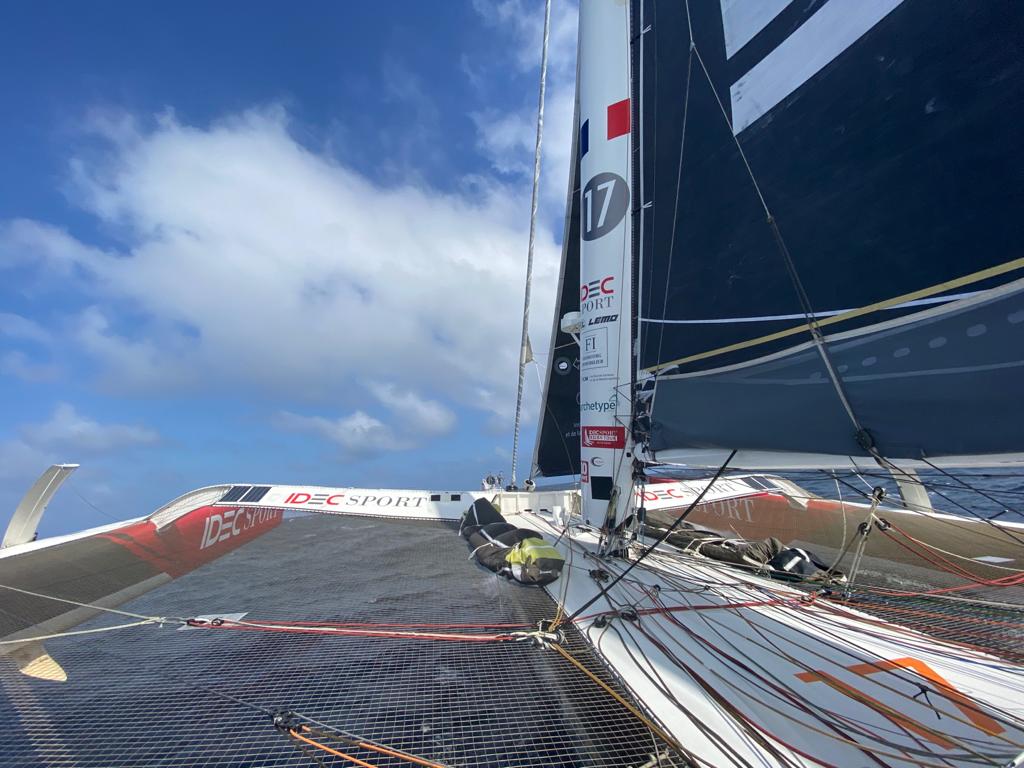 Francis Joyon and crew heading towards the Azores

The huge Atlantic Ocean is offering a series of weather difficulties to the IDEC Sport maxi trimaran and its crew of Francis Joyon, Christophe Houdet, Bertrand Delesne, Antoine Blouet, and Corentin Joyon.

It is clear in the Northern Hemisphere; the air masses are battling it out violently and the sailing conditions are varying rapidly for the crew on their way to London and the finish of the Tea Route record.

The trade winds are just about over for Joyon and his men. Sailing close to the north-easterly wind on calm seas has meant that they have had favourable conditions to look after the boat heading due north towards the Azores.

This is a better route than initially imagined, as they had thought that the red and white trimaran would have to go a long way west of the Portuguese islands.

With the trade winds dying away this evening and tomorrow, Joyon’s crew will be back suffering light airs in the middle of the high, where there is no other option but to cross it.

To the north of the islands, there are strong downwind conditions. How easily they pick up these winds will determine their success in this attempt at the historic route taken by the big sailing clippers of the past between China and Europe. This is clearly a complicated sea route, which has been full of surprises.

As complicated as you can imagine in the South, the Atlantic in the North looks more familiar to the men on IDEC Sport.

The trade winds will be over later today for the maxi trimaran, which was able to safely progress close to the direction of the wind with for a while a light, choppy sea holding her back, but it soon improved to allow the boat to sail smoothly.

“After sailing almost 13,000 miles out on the water, we are still scared when we see the boat slamming,” Joyon explained.

“When the swell eased off and the sea became smoother, we were able to follow a route due north, which meant we gained a lot of miles.”

While the high-speed sailing at almost 40 knots they experienced in the Indian Ocean is not something they have found in the Atlantic, the trimaran has nevertheless kept up a decent average speed of 19.7 knots since the Cape of Good Hope, enabling her to achieve a lead of almost 300 miles over the record holder, the Italian crew on the trimaran, Maserati.

“We will be sailing close to the Azores,” Joyon said. “We are a bit worried about the wind shadow from the volcanic peaks, so we will remain some way off. It feels like home since we crossed the Equator.

“The weather patterns are familiar to us. It is true that the winter lows are deep, but sailing downwind, the boat copes well with the strong winds and heavy seas. Once past the Azores, we are expecting a strong south-westerly air stream in excess of 30 knots with 6 metre high waves.

“We know that the boat deals well with those conditions.” But before that 36 difficult hours lie ahead for Francis and his men as they pass through an area of high pressure.

“The charts indicate merely three or four knots of wind during the night. If the sea remains calm, the sails will be flapping less and we should be able to make some slow headway now and then.

“Our latest forecasts suggest we should be entering the Thames on Wednesday 19th February. We have just finished our final bag of food. There is just the freeze-dried stuff left. It’s not what we like most and it appears to be encouraging the crew to push hard to get back home quickly,” he laughs.

We can see that there are still a number of difficulties on the way to London and the crew will experience a wide range of conditions. Their lead, which increased to more than 300 miles this morning, is set to drop on this 28th day of sailing. Giovanni Soldini and his men experienced some good conditions favouring high speeds close to the coast of Senegal at this point.

The end of the week and the start of next week are going to be tense for Francis and his sailors, who are looking for quick access to the high speed race track supplied by the low pressure systems moving rapidly towards the Channel approaches, 1700 miles to their north-east this morning.

“For several days now, we have been into the freeze-dried food. All of the good stuff has been eaten,” Bertrand Delesne said. “With Christophe, we found a little flour and this morning, and it was pancakes for everyone.

“The South Atlantic was completely unpredictable and not very cooperative. We hope to get across this area between the high pressure systems and the south-westerly winds offering downwind conditions.

“Personally, I have learnt a lot during this long voyage. We deal with each difficulty we encounter. One thing at a time. The high is building and the seas have calmed down. There is a nice sky associated with the trade winds. We shall be catching sight of the Azores and that is great.”