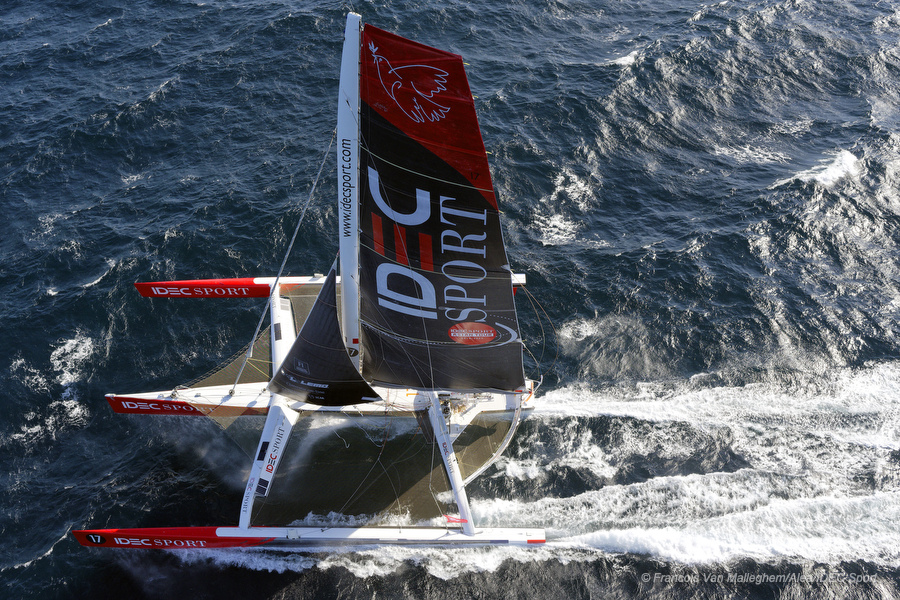 Francis Joyon, Christophe Houdet, Antoine Blouet, Bertrand Delesne and Corentin Joyon will reach the halfway point of their Tea Route journey tomorrow morning (UTC) when they round the Cape of Good Hope a few hours after passing Cape Agulhas, the southernmost tip of Africa, which marks the point of entry back into the Atlantic Ocean.

In terms of the numbers, the men aboard the boat can smile, as when she rounds the famous Cape tomorrow, IDEC Sport will be around one and a half days ahead of the record pace set by the record holder, Giovanni Soldini and his Italian crew whose 70-foot trimaran, Maserati set a reference time from Hong Kong of 16 days, 2 hours and 25 minutes.

The final day in the Indian Ocean looks like being just as tricky as those that came before.

With the African coast close by, IDEC Sport has been fast this morning in winds in excess of 30 knots, but will have to deal with the infamous Agulhas Current. This is one of the strongest and steadiest surface currents in the world and can sometimes exceed six knots. It runs down the eastern coast of South Africa towards the south-west and will propel the maxi trimaran in the right direction.

However, the strong currents and headwinds will whip up a swell that does not favour smooth sailing. With 400 miles to go before returning to the Atlantic, Joyon and his men will once again have to deal with various strategic choices before picking up winds to allow them to sail downwind.

“We’re going to have to deal with two transition phases today and tomorrow with a trough we need to cross and something we always fear, the passage of a front with lots of gusts, which will hit the boat and mean we will have to be extra cautious on the sheets, “ Joyon explained.

“So there will be no high speed sailing ahead for now and maybe even some light airs. Good Hope, like the other capes is something you have to work hard for.

“We had hoped that the Indian Ocean would resemble the North Atlantic from East to West,” Joyon commented.

“It wasn’t like that. The trade winds simply were not there and since Indonesia the small low pressure systems have turned into transition zones with calms, so the crew and the boat are pretty tired now, as these transitions and periods crossing through fronts required a lot of manoeuvres, and generated a lot of stress when the wind gusted.

“The sea never really smoothed down because of the cyclic areas and never matched the wind direction.”

When they reach the Cape of Good Hope tomorrow shortly after lunchtime according to the latest routing plans, IDEC Sport will finish the first half of this long voyage of more than 13,000 miles on the direct route after 14 days and a few hours. This performance has nevertheless been achieved with average speeds above 22 knots out on the water.

After the Indian Ocean, where the trade winds were missing, the whole crew is looking forward to downwind sailing. “After the Cape of Good Hope, we will pick up some south-easterly winds and the climb back up the coast of South Africa and Namibia is looking good,” a delighted Antoine Blouet said.

“We know that we will be sailing in warm waters where there a lot of cetaceans, which is why we want to avoid getting too close to the coast. It’s out of the question for us to take the risk of hitting whales and seals, which live along the coast.

“The Atlantic means we are nearing home. It has been nice to sail in places that ocean racers don’t usually get to. It’s a long journey and our options are still not clear for our route around the St. Helena high.

“We’re pleased about our lead over the record pace. This is an incredible voyage. Sailing in the context of a competition is new to me. I was very stressed at the start, but I have found my place on board and am really enjoying myself.”