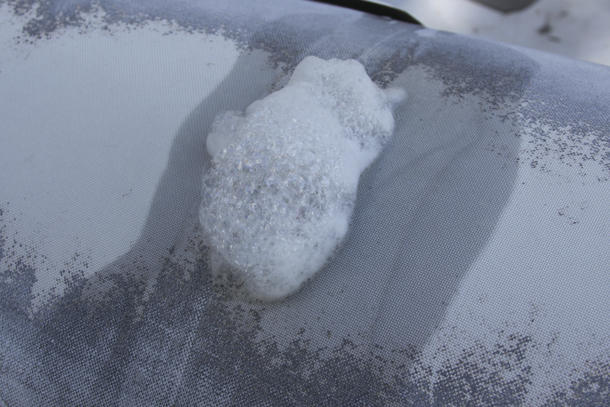 Step 1: The soapy water test revealed much of the air was escaping from an area of heavy wear on the pontoon top.

When Rob and Karen Oberg bought their Whitby 42 Dreamtime, she came with a 3.1 metre rigid inflatable that showed clear signs of her twelve years of service.

It needed a serious injection of air immediately before every use and they dared not go anywhere without taking the pump along.

Nonetheless, they started to rethink the expense of a replacement. To handle their 15 horsepower outboard, they were quoted $3,500 to $5,500, so they began researching ways to extend the life of what they had. Here is Rob’s story of that refurbishment:

“We found a forum discussion by people in the U.S.A. who had faced the same dilemma before a very successful DIY rejuvenation of their tired RIB. They recommended a range of products by Inland Marine. We couldn’t find an Australian stockist, but thankfully a New Zealand listing did appear. When we read that the business had been set up solely to sell this product we were determined to give it a go. The products are water based, so can be sent by air and arrived within the week.

We fully inflated the dinghy and tested for leaks with soapy water. The worst was in an area of heavy wear near one of the seams.

After half deflating the pontoons, we squirted about 230 millilitres of Inland Marine Sealant into each chamber. We were careful to rinse each valve with fresh water to prevent them getting stuck up by the sealant.

We then reinflated the pontoons just enough to make them rigid, then slowly rolled the boat over side-to-side and end-for-end a few times to make sure the entire insides of the chambers were coated. Then it was a case of just turning each half-hour for three hours to prevent any pooling. We then left the boat overnight.

After inflating everything back to full pressure we went looking for leaks but found no sign of escaping air at all. Given the state of our dinghy, we had expected it to need at least two applications of the sealer.

Having breathed new life into ‘old saggy bottom’ we also wanted to make her look good and give the Hypalon pontoons added protection from the elements. The aluminium hull was sanded and received two coats of primer before another couple of coats of shiny Marker Yellow marine enamel. We hope the dinghy is never upturned at sea and in need of spotting from the air but, if it happens, she will be highly visible!

We sanded the underside of the pontoons with 100 grit to rough up the surface before washing and thoroughly wiping over with acetone. Hull and rub strake were masked up, before putting on two coats of the Inland Marine Topside Paint in grey. You need to allow three hours between coats but the product was very easy to apply and using a good quality brush minimised stroke marks in the paint.

Grab handles that had fallen off were rebonded using two part inflatable boat adhesive from Polymarine. We then repeated the prep. discussed above but, in our theme of being easy to see, the tops and insides of the pontoons were painted yellow with just the reinforced seating pads in grey for contrast.

After the inside of the hull was spruced up with two coats of white, we were done.

Our twelve year old dinghy was now ready for many more years. Most people think we have a new baby until we tell them the story of her makeover.

None of the work was difficult but it does take a few days due to the curing time between coats etc.

Postscript: In the 12 months since the makeover we have used the dinghy extensively, especially during our five month cruise to the Whitsundays. The area of worst wear began to lose a bit of air towards the end of the trip but was easily fixed with another dose of sealant in the affected chamber. Maybe we should have applied the two doses in the first place, as per manufacturer’s recommendations for heavily worn areas, we probably would not have had the problem.”

Ideas Locker is a regular feature in Cruising Helmsman magazine. Contributions are welcome and should be sent to Petrea@petreamccarthy.com