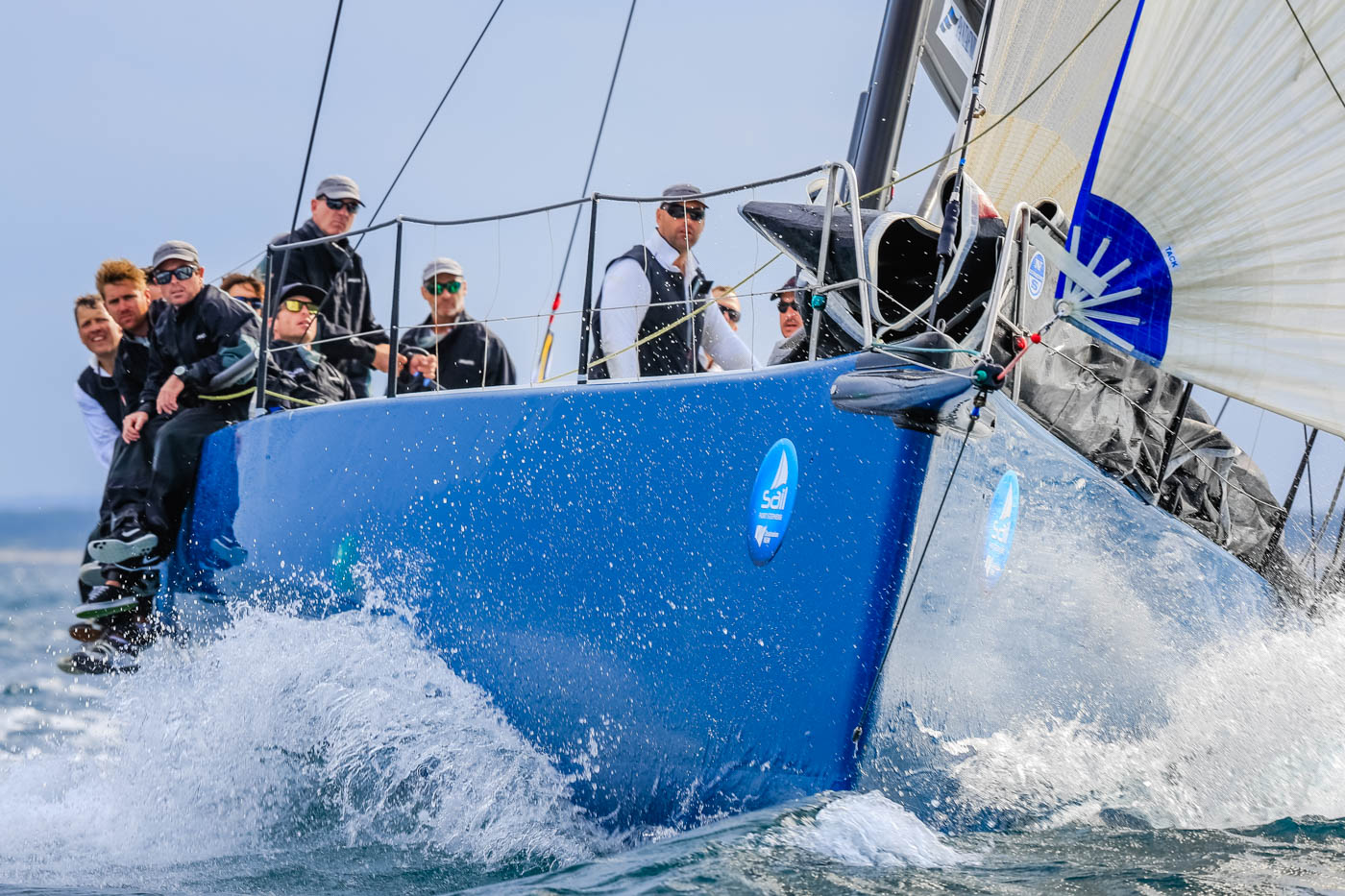 When the weather cooled after a glorious and mostly dry week at Sail Port Stephens, the action hit boiling point offshore in the IRC fleet contesting the final day of their state title across three divisions.

Matt Allen’s TP52 Ichi Ban lived up its Japanese translation, finishing number one in every race and cleaning up division 1 by a galaxy-size gap of 13 points. “We thought we sailed really well, and it was lucky for us the other three to four boats often were sailing against each other so we were able to put time on them; we could sail our own race and dictate. Allen is a huge Port Stephens fan and in particular the IRC arena. “Providence Bay is one of the best race courses in Australia; in a southerly or northerly there are plenty of opportunities. It’s not a one way track.”

At times the IRC fleet enjoyed 16-17 knots of southerly wind offshore while in the background the thunder rumbled and the dark clouds held threatened to unload. Amazingly the 100 or so crews contesting final inshore and offshore races were spared the conditions that unleashed on Newcastle, the check-in hall at Newcastle Airport closed after a partial roof collapse due to the deluge.

Ichi Ban and the current two-time IRC Australian champion, Karl Kwok’s Beau Geste, a modified version of a TP52, are set to stage an almighty stoush at this year’s Australian Yachting Championship as part of Audi Hamilton Island Race Week in August. “It will be game on,” Allen predicts.

Bob Cox’s IRC state champion in 2015, Nine Dragons, made a late charge and squeezed into the top spot thanks to a win in the last race combined with an unwelcome fifth result for Phil Tomkins’ Sydney 38 Next (CYCA) that shifted them backwards and into second on a countback.

“It was bloody stressful,” said Cox on the points situation going into the final race. “We knew what we had to do in the last race; there was a bit more breeze and the asymmetric boats came to the fore while unfortunately for Next they dropped back in the fleet.

“After an unsuccessful first day we found ourselves quite deep in the fleet. We progressively improved, particularly with the passage race, and finished it off with a last minute effort to level with Next and win on a countback. We must congratulate them on a very consistent performance; they are the first really competitive Sydney 38 we’ve struck.”

Rob and Jan Howard’s Newcastle based Beneteau 40.7 Schouten Passage, skippered by son Will, finally took out the overall division win and IRC title after six attempts.

“We hoped for more breeze today and it was delivered,” Will Howard said. “Since the first day we’ve been within a couple of points of Justadash, then they had a tough day yesterday whereas we were solid, which got us back into the game. Both races today were really close and the Beneteaus dominated. After six attempts, to finally win overall is a thrill!”

Philip Dash’s Beneteau First 40, Justadash, from Middle Harbour Yacht Club at The Spit in Sydney hounded the Novacastrians the entire IRC series and finished one point off. Third on the leaderboard was Peter Sorensen and his Sydney 36cr The Philosopher’s Club (MHYC).

MC38s and sports boats thanks to Newcastle Airport

Leslie Green’s two-time current Australian champion Ginger shrugged off the setback of yesterday’s disqualification to begin the second half of the eight race schedule with a bullet. The points leak from the DSQ, and the schmick form of Howard Spencer’s Team Menace, took the opportunity for Ginger to pull back the Royal Akarana Yacht Club team away, and Green had to be happy with second by six points.

Menace’s tactician Ray Davies said their speed was good and manoeuvres consistent, plus they were able to dig themselves out of trouble a couple of times. “It was a good regatta and we are really happy with how the team sailed; we kept it clean.” Menace was named the series winner and collected the boat of the day title back-to-back.

Only three points separated the entire fleet at the start of racing in the sports boat results. In the most wind of the regatta at Salamander Bay local sailor Matt Bonser and his Melges 24 crew on Watch Me collected a third divisional win at Sail Port Stephens.  “The handicapping was pretty good; everyone was up there at one point,” said Bonser. “We saw 12-15 knots of wind then it was fluky but nothing wild.”

Second was another Melges 24, Geoff Campbell’s Knot Ready, and third was the Viper 640 Heat driven by the youngest skipper in the fleet, 14 year-old Tyler Ratcliff who picked up boat of the day prize.