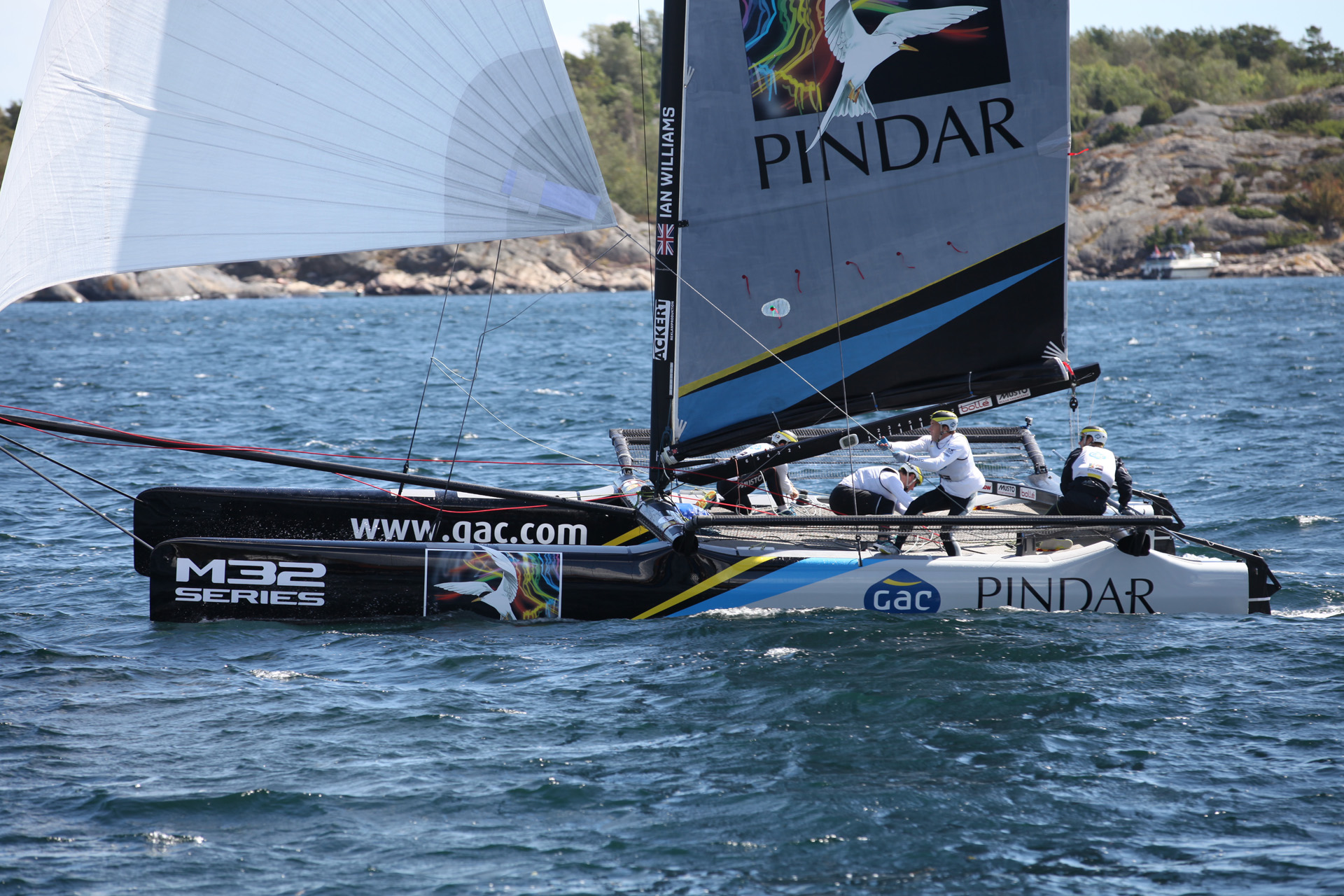 Risør, Norway (July 30, 2017) – After sitting in podium positions throughout this regatta following a hat-trick of wins on day one, the British team GAC Pindar, skippered by Ian Williams, pinched the top spot on the third and final day when it counted. 2016 defending champions of the M32 Series Scandinavia showed their potential throughout this regatta as they executed manoeuvres effortlessly and cruised to six race victories over the 19 race event.

ESSIQ Racing Team have topped the overall leaderboard the first two days and were upset to drop that on the last day but runner-up position in Risør means they slide up the overall series leaderboard. “We would like to have been stood on the top spot of the podium today for sure,” commented skipper Nicklas Dackhammar as he was welcomed to the second place podium position, “But we will be back in Helsinki next time fighting even harder for it.”

Unforced errors of being OCS at the start gun in race two and hooking the windward mark in race one were both costly mistakes and played a big factor in the final result for the team as they end just nine points behind GAC Pindar on the final event leaderboard – a competitive position with the final double point races.

The surprise turnaround of the regatta came as Johnie Berntsson flew from a disappointing day one to end the second day’s racing in top spot. The Swede had great rhythm around the course and similar to Williams, Berntsson executed manoeuvres in perfect style. “Tacking is the easy bit for me, I just sit back and watch the guys do the work.”

This Swedish team are always a hit with the crowd and that was true again here in Norway today as they cruised to victory in the first race. That early spike in performance did not last as Berntsson called some bad mark choices which gave away his lead from a perfect start in race two – a mistake that the team will undoubtedly be kicking themselves over as they then slipped to third in that race.

Consistency was a big part of the success of GAC Pindar over this regatta, not always winning but keeping within important top three finishes. With no discards though the event and double points on offer for the final two races, keeping those back-of-fleet results off of the scorecard was key to Ian’s success. “GAC Pindar had a great day is Risør and I couldn’t be more happy with the new team put together for this regatta.”

The first two days off perfect sunshine were topped off with stormy conditions for the third day, but even heavy rain couldn't spoil the beauty of Risør. The Norwegian summer hotspot hosted the M32s perfectly in its long, narrow fjord, keeping the race course tight to shore. Hundreds lined the dock to cheer teams over the line, a spectacular turnout for such a small venue – clearly the Norwegians have an appetite for this high-performance catamaran racing.

With the win in Norway, GAC Pindar knock Jonas Warrer’s Wallén Racing off their top spot on the series leaderboard. Risør marked the second stop on a five regatta series so with three events remaining there is still time for rivals to steal the trophy off GAC Pindar before the season finale in Stockholm at the end of summer. Williams relishes the competition, saying after the prize giving, “It’s great for the team now to be at the top of the leaderboard and we’re looking forward to a tough battle in Helsinki.”

The series next heads to Helsinki, Finland for stage three where Ian Williams will look to hold on tightly to his lead, with Sweden’s ESSIQ Racing Team seeking an event win to pull their score higher on the overall leaderboard. The regatta begins in just two weeks on August 11th.