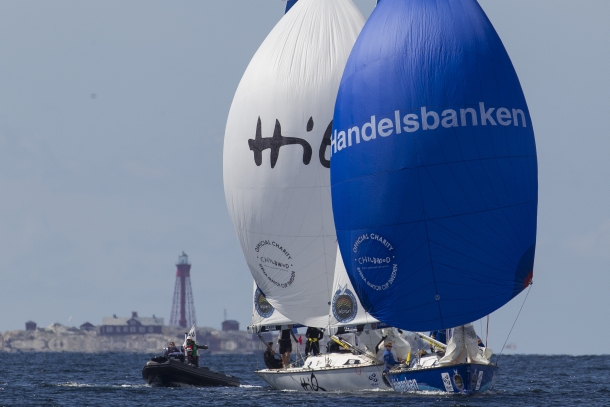 A change of conditions brought a change in fortune for several of the 14 teams competing in the second day of qualifying at Stena Match Cup Sweden, stage two of the 2014 Alpari World Match Racing Tour.

Today the wind was lighter and blowing out of the southwest. This enabled the race committee to lay a course running along the length of the fjord to the south of Marstrand island. All was going well until a giant cloud stopped proceedings mid-afternoon causing the wind to flip through 180 degrees.

One of the few to maintain their consistency through this was Ian Williams’ GAC Pindar crew. With three wins today, the British team has pulled clear ahead in this qualifying stage with an 8-1 scoreline.

“We had three really close ones, so we’re pleased we won them,” said Williams, who is still recovering from a sore throat.  In his match against David Gilmour, the young Australian passed Williams on the second beat and the four time World Champion had to use all his prowess to recover the lead on the final run down to the line. Then in his match against Luna Rossa and Francesco Bruni, Williams was again clear ahead, but on the final run the Italian America’s Cup crew gained lateral separation, found their own breeze and drew level. “We won that, but only by about 0.5m,” said Williams.

Eight wins for the GAC Pindar team means that it is now the first to be assured of a berth in Friday’s quarter finals.

Having a much better day was defending Alpari World Match Racing Tour champion, US Virgin Islander Taylor Canfield, who today won four of his five matches, losing the final one to the Lunajets crew of France’s Mathieu Richard.

Canfield said that yesterday the crew has been a little under the weather, in particular Kiwi tactician Rod Dawson.

“We didn’t sail poorly yesterday – we just needed to finish races and we did that today,” said Canfield, who is fresh from having won the Etchells keelboat World Championship in Newport, Rhode Island, sailing for Ian Williams’ regular tactician, Bill Hardesty. “Our pre-starts were good, we were getting off the line well and our speed and tactics were great. Just a minor error in the start against Richard kept us from making a move on him there.”

Also on the ascent has been Swede Bjorn Hansen, the defending champion from this event, who had a poor opening day, but put this right today by winning three and losing one. “We didn’t feel too good yesterday, but apparently we started exactly the same way last year with one win and two losses on the first day. It might be a good omen.”

Now on four wins and two losses, Hansen currently leads the four Swedish teams competing here. Oddly the draw for qualifying has seen Hansen line up first against all the Swedes and the two Danish teams in what he refers to as the ‘Scandinavian championship’. “It doesn’t feel very good that the other Swedes are doing badly. When we are racing them it is always more emotional, it means more when you beat them as it shows who is best in the country. On the other hand I would be extremely happy if any of the three others made it through to the quarter finals.”

Like Canfield, Hansen now has his objective firmly set of getting three or, better still, four wins tomorrow that will buy him a ticket through to the last eight.

Once again the 20 year old Joachim Aschenbrenner put on an impressive show today, punching above his weight, beating some big names including Mathieu Richard, Ed Baird and Keith Swinton.

Team Alpari FX skipper Keith Swinton said of the young Dane, who is currently on four wins and three losses: “He is doing a lot of match racing and has been around for a little while now and has sailed these boats quite a bit being from Denmark. He seems to be sailing very well. It is good to see the young guys coming through.”

15 flights of the 24 total in qualifying are now complete and the remainder will be sailed tomorrow and if required on Thursday. Racing is scheduled to get underway tomorrow at 11:00 after the Pro-Am race.