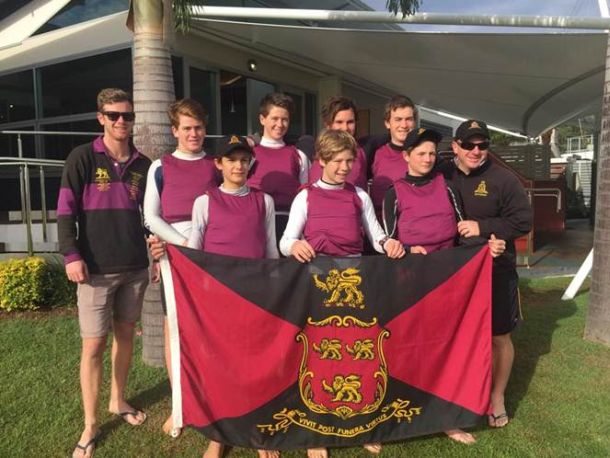 The Hutchins School has won the Australian Schools Teams Racing Championship on Brisbane’s Moreton Bay, coming from 13th place in standings on the morning of the final day to snatch victory from 24 schools around the nation. The win was Hutchins’ seventh national title in school team racing in 25 years, the last having been in 2009.

Revelling in Thursday’s freshest breeze of the week, 10-15 knots, the team of teenage boys, many of them current or past Tasmanian champions, swept past their opposition to make the final eight. From there on the three-boat team won seven consecutive races, beating South Australia’s Westminster College 2-1 in the quarter finals, then fellow Hobart school, Friends Blue, 2-1 in the semi-finals, and ultimately Queensland’s Iona Collage 3-2 in a hard fought, best of five final.

The winning Hutchins crews comprised Sam King and Charlie Zeeman, Sam Abel and Will Cooper, Ollie Burnell and Lachlan Richardson with Charlie Connor as reserve helmsman. All are members of the Royal Yacht Club of Tasmania or Sandy Bay Sailing Club. Royal Queensland Yacht Squadron conducted the championship with the teams sailing in Pacer dinghies.

All three Tasmanian teams, Hutchins, Friends Blue and Friends Red, reached the quarter-finals and then the semi-finals, Hutchins winning with the other two teams ending up third and fourth overall.

In the semi-finals Hutchins scored a 2-1 victory against Friends Blue, the current Tasmanian state champion team, while Friends Red went down to Iona, 2-1.

“Our boys really got into their stride yesterday…they staged a Makyve Diva finished to take the trophy for Hutchins for the seventh time in 25 years,” Hutchins team manager Greg Rowlings said yesterday. “It was also the fourth personal victory for their coach, Elliott Noye… he won the trophy once as a crew, three times as a helmsman and now as a coach.”