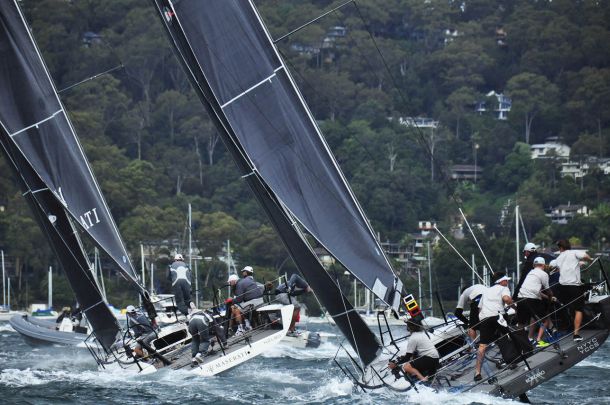 Fresh from the class’ national championship in April, the Australian and New Zealand MC38 contingent is pulling on the gloves again, this time on Sydney Harbour May 9-10, 2015 for the Autumn Regatta.

Two-time Australian MC38 champion Ginger, crowned consecutively at the recent nationals on Pittwater, will have a new driver on the helm for the weekend in Hobart neurosurgeon and decorated multi-one design helmsman Andrew Hunn.

“The Ginger team were kind enough to ask me to fill in in Leslie's absence,” Hunn said. “Considering their recent form they are pretty big shoes to fill! I hope not to let them down and am looking forward to competing against the new and established teams in the class.”

Hunn actually helmed a chartered MC38 he named Voodoo Chile to victory in the 2013 MC38 Australian Championship, winning the title on a countback after finishing on equal points with Leslie Green’s team. The two skippers are connected through Hunn’s long-time Voodoo Chile tactician, David Chapman, who is Leslie Green’s tactician in the MC38s.

Howard Spencer’s Kiwi crew on Menace, the decisive winner of the first stage held in February out of the Royal Prince Alfred Yacht Club, is returning to the inaugural five-part MC38 Australian Season Championship.

“We intend to race in the second regatta of the series,” confirmed boat captain Chris Reid. “It's been a while since we were last in Sydney and everyone is very excited to get back on the start line. Our goal for the season is pretty much the same as everyone else’s; to sail smart with minimal mistakes and hopefully do enough to get the job done.”

Up to seven races are scheduled to make up the series – six short and one passage. The opening race is due to commence at 10am both days, in order to capture the favourable land breeze typical for the time of year.

Principal Race Officer Rob Ridley from the host Royal Sydney Yacht Squadron at Kirribilli will lead the on-water team and international umpires David Tallis and Gary Manuel will be right in the middle of the melee adjudicating any infringements they see.

Saturdays are hectic enough on the internationally renowned waterway. On Sunday May 10 the CYCA’s winter series fleet of close to 100 keelboats are going to have to pick their way through the tightly bunched one design class completing their day two schedule ahead of an early prizegiving.

Being Mother’s Day on the Sunday, the sailors will need to put aside time to spoil mum either very early in the morning or later in the day once the fleet is docked and the trophies presented.

Saturday’s long range forecast is for WNW winds around 13 knots spiking into the low 20s from the same direction on Sunday. Fine weather is on the cards for the MC38’s Autumn Series, a welcome outlook after weeks of heavy rain in Sydney.