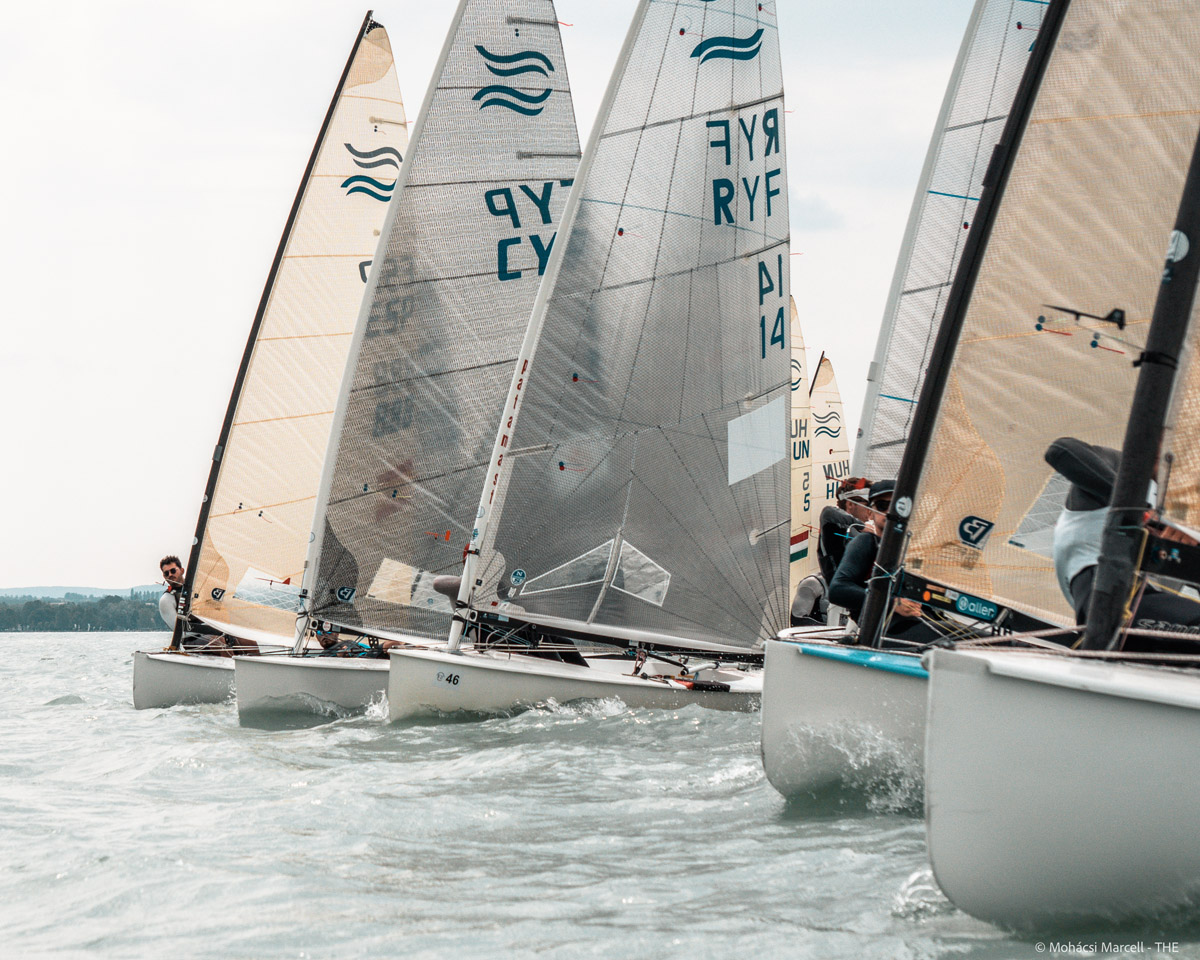 Lake Balaton, Hungary: Levente Rácz started to apply some pressure to the overall leader, Domonkos Németh, on the second day of the 2021 U23 Finn World Championship for the Jorg Bruder Finn Silver Cup, at Tihanyi Hajós Egylet (THE).

In lighter winds, Rácz took the opening race only to be scored as over the line early, and followed that up with a very close win the second race before Németh struck back to win the final race of the day. Németh continues to lead overall from Levente Rácz and his brother Bence Rácz.

Racing got underway after a long delay waiting for wind. Three races were then sailed in 6-10 knots. The top five places are now filled with Hungarian Finn sailors after six races.

Race 4 started in around 7 knots, with Levente Rácz leading all the way. He led round the top from Panagiotis Iordanou, from Cyprus, and Németh, finding the best pressure on the right. Round the bottom mark, Rácz and Németh, who was up to second, pushed out left and kept going, Rácz trying to stay on top and control the regatta leader. He did a good job and hung on to cross first from Németh with a close finish between Zsombor Majthényi, Ábel Szűcs and Iordanou.

Unfortunately, Rácz and Iordanou were scored UFD (over the start), so Németh took the win from Majthényi and Szűcs. After a penalty at the start Bence Rácz sailed a great race to climb back to fourth.

The breeze had increased slightly for Race 5 and again it was Levente Rácz showing the way. After a good start he stuck to Németh, initially heading left until they tacked at the same time, and then stayed on top until the top mark. Iordanou rounded third. Rácz kept it close with Németh, staying in control round the remaining three legs to win by a few boatlengths.

Oscar flag for free pumping was raised at the top mark in Race 6, with Németh finding the front for the first time. He got a jump on the fleet half way up the first beat with a big shift and never looked back.

Levente Rácz  said, “I had a pretty solid day. I had two perfect starts and in the first two races I was just sailing to Doma [Németh], trying to control him on the upwinds, and in the third I had an extremely bad start but did a quite nice recovery to fourth. So I feel I sailed well, but the results don’t show that. It’s a pity about the first one.”

Rest of the week?

“According to the forecast we have around 9-11 knots every day so similar conditions to today. Catching Németh will be hard, but I feel very confident and competitive for the upcoming days.”