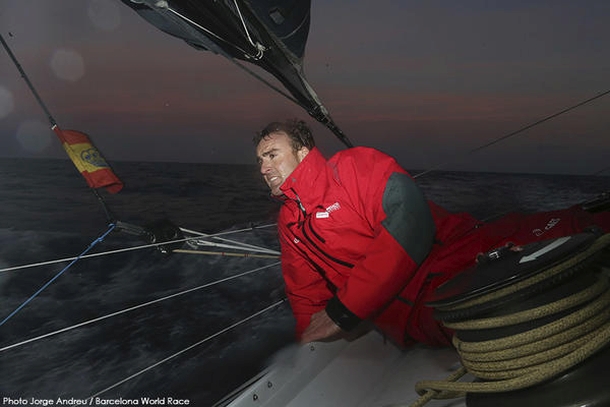 For the Barcelona World Race leaders the descent south towards the Canary Islands and the lifeblood Trade Winds has proven relatively slow over the last 24 hours. The fight for supremacy, such as it is, has been between stable-mates Hugo Boss and Neutrogena. This Monday afternoon the British-Spanish duo Alex Thomson and Pepe Ribes appear to have eased slightly further ahead of Guillermo Altadill and Jose Munoz, extending by some two miles between 0900hrs UTC and 1400hrs UTC. Thomson commented: Neutrogena and Gaes closer and closer and nothing we can do about it. Pepe says ‘Patience’……. something I don’t have a lot of!

Through a moonlit night into this morning, the two IMOCA 60s were ghosting across the quiet seas in search of any extra wind pressure. Spanish skipper Altadill reported that he could hear the occasional screech of Hugo Boss’ sheets as the winches worked, could see their lights clearly and sometimes made out his friends and rivals working on the deck. He told his shore team at 5 Degrees West in England today that sunrise this morning had them 200 metres to leeward of Neutrogena.

“As you can see there is never time to be bored on these IMOCA 60s in this race, even when the wind is less than 2 kts. When you are in light conditions when you might normally relax but when there is a boat at 500 metres away then your level of concentration stays high.” Altadill wrote this morning,
“Hugo Boss was under a nice, full moon. We were sailing with the code sail, just gybing occasionally to find the little patches of breeze you see on the water in the clear moonlight. I see his lights, sometimes the noise of the sheets. The night passes quickly on board Neutrogena.”

The leading trio had about 130 miles to reach the northern tip of Lanzarote, looking like they will probably pass to the east of Lanzarote and Fuerteventura after which they should start to really accelerate in the NE’ly Trades which will send them on their way at higher speeds. Just to the south of the archipelago the breeze is expected to be around 20kts, perhaps more.

Anna Corbella and Gerard Marin have already proven the value of their two years of training together on GAES Centros Auditivos, coming back into the top three at  8,4 miles behind Hugo Boss and 6 miles to Neutrogena, having now consolidated to tuck in on the same line as the two leaders. The Spanish partnership – the only mixed female-male duo in the race – were still slightly quicker than Hugo Boss and Neutrogena on the afternoon poll. Marin reported that they had used their times in the light airs to maximum effect, cracking on through their jobs list. Top priority was getting their computer system working properly, which they appeared to have done.
A hitch 20 miles or so to the west has cost Cheminées Poujoulat almost exactly that in terms of the DTF, so while they are now 26 miles behind Hugo Boss that is almost entirely in lateral separation. But their westerly option does open the question how they will negot iate the Canary Islands.

Rookies on the run
It is no kind of coincidence that the three four leading boats are the best prepared, either in terms of time with their boats, or IMOCA 60 racing. Renault Captur are slowly getting back into the frame, but one initial error cost them hours, but as German co-skipper Jorg Riechers mentioned today, as a partnership they are new to their IMOCA 60 and are only just learning how best to work together and how to make their boat go best:
“ We have not really had too much of a strategy as such because we really did not the know boat too much and what we can do with it, so we went into the race without too many expectations really. We had our fair share of problems after the start and so we tried to attack a little bit but we are really still finding the way we work as skippers.”

From fourth to eighth, the skippers are doing their first IMOCA 60 race together as a partnership. For One Planet One Ocean Pharmaton, Aleix Gelabert and Didac Cos ta, their race has been ahead of all expectations so far. The round the world rookies – who both raced the Mini Transat in the past pledged to simply try to get around the course safely, but find themselves at just 80 miles from the leaders. That said, their progress has rather ground to a halt this afternoon, speeds plummeting to just 1 or 2 knots.

The race of Gelabert and Costa received praise and respect today from the Garcia brothers who, though very experienced and accomplished amateurs, are very much on the nursery slopes when it comes to IMOCA 60 races around the world. The We Are Water pair have also been tentative in the early days of the race:

“We have been doing things together as brothers for many years and so we are in tune with one another. And so that works for the IMOCA but we are just learning as we go. It is going well and we are happy with the boat.

We are trying to get close to the front, to the leaders, but we have only light winds so far. And One Planet One Ocean are sailing a great race, that is the truth. They have the oldest boat in the fleet but really they are going so well and are not too far from the front of fleet. We try to get a few miles back at the fleet but it is up to the wind gods really. We feel like we are in the race and doing it at our pace as we said we would, but of course our main goal is to finish.”

Meantime the Great Escape, Nandor Fa and Conrad Colman’s departure from a frustratingly slow Mediterranean was completed at 1539hrs UTC when they passed the gates of deliverance into the Atlantic. Their race starts here!