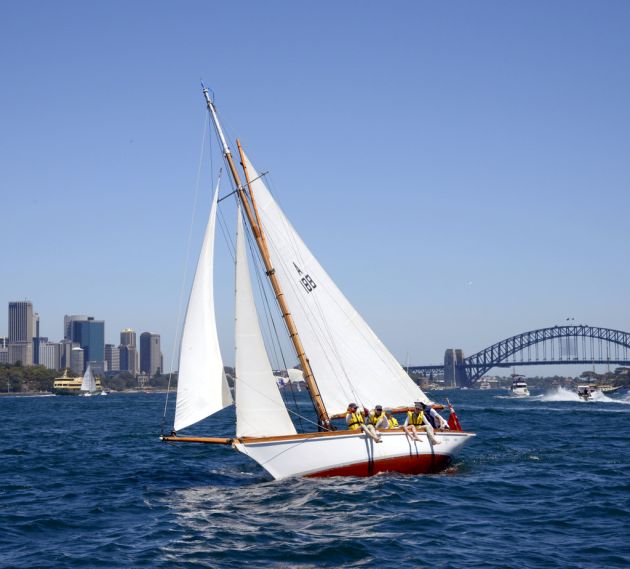 Among the Harbour fleet entries is Kelpie, a gaff-rigged cutter built 123 years ago and a classic example of yachts designed in the late 1800s – a clipper bow, counter stern and flush decks and gaff rig.

Both the Harbour and ocean fleet include past and present Sydney Hobart Yacht Race participants, including two line honours winners, Fidelis (1966) and Brindabella (1997).

Originally called the Anniversary Regatta, the Sydney Harbour event was first held on January 26 1837 to commemorate the arrival of the First Fleet in 1788.

The regatta was an immediate success with sailors and the public alike, who made it a picnic day on the shores of the Harbour – as many still do today.

The Regatta has been held every summer since as a unique and most appropriate way to mark Australia’s National Day – by competing in or watching the magnificent spectacle of the Australia Day Regatta.

Tomorrow’s 180th Australia Day Regatta again will be a focal point of aquatic events celebrating Australia Day on and above the Harbour, which include the ferrython, tall ships race and RAAF fighter aircraft flyovers, as well as concerts and celebrations on the foreshore.

The main 180th Australia Day Regatta will start from 1.30pm when a fleet of Formula 18 catamarans heads off on a long harbour race, followed by the classic and divisional classes.

The Australia Day ocean race from Sydney Harbour to Botany Bay and return will start from near Shark Island at 11am, with yachts competing for the City of Sydney Sesquicentenary Cup.

There also will be racing on several inland waters, including Chipping Norton Lakes in Sydney’s west, as well as radio-controlled yacht racing to mark Australia Day.

Entries in the two Classic divisions comprise almost a third of the total entry of keel racing yachts, indicative of the strong interest in restoring and racing older yachts, including gaff-riggers.

Kelpie is among the mostly gaff-rigged yachts in Classic Division 2, including the original Ranger and other Ranger designs, Cherub and Vanity, and the ‘couta boat Dawn.

The Australian Register of Historic Vessels records that Kelpie was built in 1893 by George Ellis, a noted sailor and shipwright, in a boatshed in the Sydney suburb of Drummoyne.

The Register describes Kelpie as “a very early surviving example of a gaff cutter racing yacht that was built in Australia, one of the few that survive.”

Her carvel hull is constructed of teak planks, copper roved, in alternative sawn Blue Gum hardwood frames and pairs of bent Flooded Gum frames with a planked deck. She has a full length keel with lead ballast and a keel hung rudder.

Over the past 123 years, Kelpie has had some 15 different owners, one of whom is reputed to have sailed the 30-footer from Sydney to Perth and back in the 1920s.

In the late 1980s, Kelpie was re-launched, having been restored to the original hull and deck arrangement and re-rigged with a modified and easier to handle gaff cutter rig.

Kelpie is currently owned by Sydney Amateur Sailing Club members Dougal and Merrin Maple-Brown and will be skippered by Merrin in the 180th Australia Day Regatta.