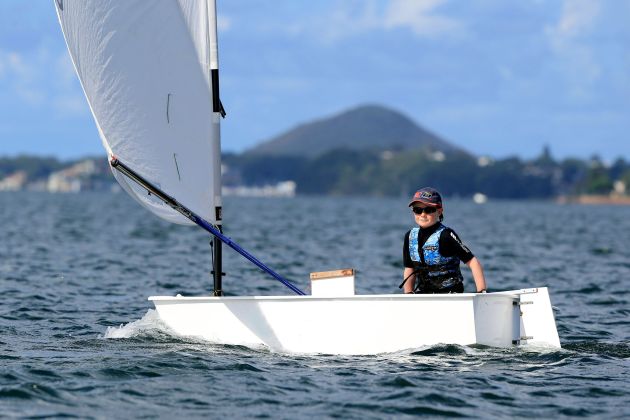 As an entrée to its adrenaline-charged IRC and Performance Handicap yachting action, the 2016 Sail Port Stephens regatta is set to host its biggest ever fleet of the world’s smallest racing ‘pram’. Better known as the Optimist, around 80 of the eight-foot dinghies are expected to contest the regatta’s Junior One-Sail off-the-beach series from April 13-14, joining Sabots, Lasers and O’Pen Bics among others.

“They’re the slowest racing boat in the world based on yardstick handicap,” says class treasurer David Ferguson of the craft that carries a pocket-hankie mainsail of 3.3m2. “But that means the racing is ridiculously tight … if you sneeze, you lose three places.”

The sailors, aged from around 8 to 13, develop such finely-tuned skills they often excel immediately when moving up to another class. At the London Olympics, some 80% of the skippers were Optimist graduates.

It’s the most popular junior class in the world – including Australia, which has around 1800 registered boats. More than 270 ‘Optis’ entered the recent Nationals, so 60 to 80 boats are conservative numbers for Sail Port Stephens. The event will double as the first round of the class’ Travellers Trophy series for 2016-17.

“We like to get the fleet to move around. Port Stephens has a few Optimists but the local kids haven’t fully come to grips with sailing the boat at the highest level. We’ll have some of the top representative sailors coming,” David Ferguson explained. “The sailing conditions are absolutely amazing and it’s really well run by the club. We enjoyed it so much last year that we’re happy to support the local community and drag a bunch of families up there.”

Ferguson’s 12-year-old son Jack will represent Australia in the Worlds’ team racing in Portugal in July while his 11-year-old daughter Mina made the Asian & Oceanian squad, so she’ll be sailing in Sri Lanka in May. Both have entered Sail Port Stephens and David’s company Port Stephens Strata is a co-sponsor (the company looks after over 200 strata schemes in the region, including Pacific Blue Resort and Horizons Golf Estate).

The Junior Off-the-beach One-Sail series is designed for competitors under the age of 18, giving mum and dad time ashore. It’s a perfect NSW school holiday activity.

Sail Port Stephens regatta director Geoff Campbell’s own children, Nicholas and Jessica, compete in the event. Jessica won her division last year and will soon get to sail on Wild Oats X as her prize.

“The thinking behind the junior series is to get everyone involved in Sail Port Stephens and to grow junior sailing in the Bay,” Campbell said. “We’re encouraging all one-sail classes to attend and enjoy the real sailing festival atmosphere that surrounds Sail Port Stephens.”

As series co-sponsor, David Ferguson adds, “being part of the local community means we all want kids to have great outdoor things to do. Nelson Bay is a beautiful spot and Port Stephens Strata is happy to support the event with the aim of getting as many young sailors on the water as possible.”