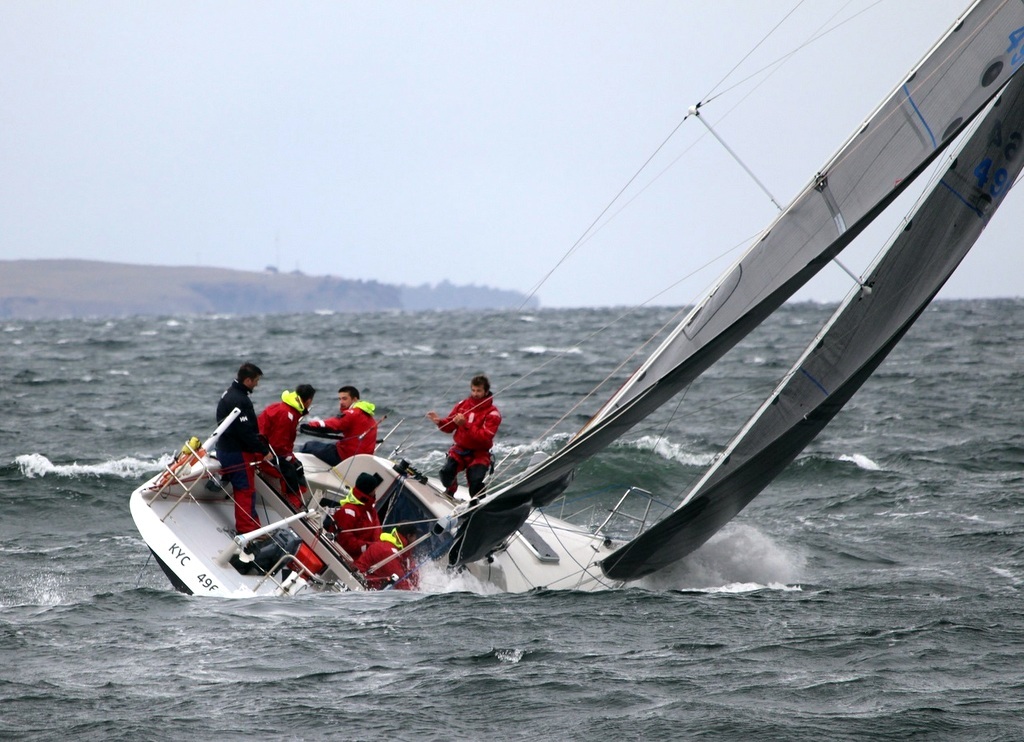 Rad is one of the IRC newcomers - Peter Watson pic

A total of more than 50 Tasmanian yachts now have IRC certificates, near 30 for the first time, thanks to the combined efforts of Tasmanian IRC measurer Fred Barrett, Australian Sailing and the Royal Ocean Racing Club (RORC) in the UK.

The exceptionally fast turnaround for each boat, in the space of a few weeks, will see almost every boat in tomorrow’s first day of the new Combined Clubs In-Shore Series racing with an IRC rating.

The Hobart Combined Clubs working committee announced in late August an initiative to make IRC the premier rating system for yacht racing on the River Derwent and southern waters.

The move is a lead-up to the prestigious Australian Yachting Championships to be sailed in Hobart in January 2020 following the 75th Rolex Sydney Hobart Yacht Race.

The uptake by owners has been almost unanimous, but getting boats measured and the details run through the UK-based computers in time for the start of the summer racing season has seen an enormous combined effort by IRC administrators.

Tasmanian IRC measurer and eminent local naval architect Fred Barrett has made an outstanding effort in measuring and in the administration required for each new boat’s certification.

Significant support of the initiative has come from Australian Sailing and its IRC staff member Matteo Zuppini.

Finally, the RORC has put in a huge effort in certifying such a large number of Tasmanian yachts, the majority based in Hobart but also at clubs at Kettering and Cygnet, and at clubs at Beauty Point in the north of the State.

The RORC’s exceptionally fast turnaround of certification for each boat will see all IRC entries for tomorrow’s Combined Clubs In-Shore Series with a current rating certificate.

A 50-boat fleet for the second Summer Pennant Race on Saturday week, 27 October, also will see the majority of boats racing under IRC as well as PHS and AMS.

Most yachts in the overnight Isle of Caves Race, starting next Wednesday evening, 24 October (the Royal Hobart Show public holiday is next day) also will have an IRC rating as they compete for the Combined Clubs Offshore Trophy.

On the Derwent tomorrow, Saturday, 20 October, crews will have to be on their mettle for lots of tacking, gybing and possible sail changes when the River Derwent Combined Clubs introduce the new In-Shore Series.

The In-Shore Series replaces the Short Course Series of the past two seasons, the new concept being to provide a shorter format than the long races conducted for the Summer Pennant, which started last Saturday with a river race.

The four-race day In-Shore Series provides for a variety of course configurations, instead of the windward/leeward courses used in the Short Course Series last season.

“A typical In-Shore Series day might consist of a two-lap race that takes competitors from a mid-river start into Ralph’s Bay and a turning mark twice, followed by a second race on a shorter, triangular course,” Royal Yacht Club of Tasmania sailing manager Nick Hutton explained today.

The fleet of a dozen-plus yachts racing today is fewer than the Combined Clubs hoped for, but the two divisions represent Hobart’s keenest racing crews and talented helmsmen.

Shaun Tiedemann’s Sydney 36cr Philosopher from the Derwent Sailing Squadron, Brent McKay’s Radford 35L Rad from Kettering YC, and David Aplin’s MBD36 Whistler from the RYCT, all have ambitious programs this summer and are using the In-Shore Series for hard crew training.

Philosopher is contesting her first Launceston to Hobart race in December, then the Australian Yachting Championship in Melbourne in January, as is Rad, while Whistler has entered the Melbourne to Hobart West Coaster.

In Division 2, there will be IRC rivalry between the Young 88s Saga (Chris Sheehan, BYC) and Young Lion (Steve Chau, DSS) and Paul Einoder’s Off-Piste from the RYCT.