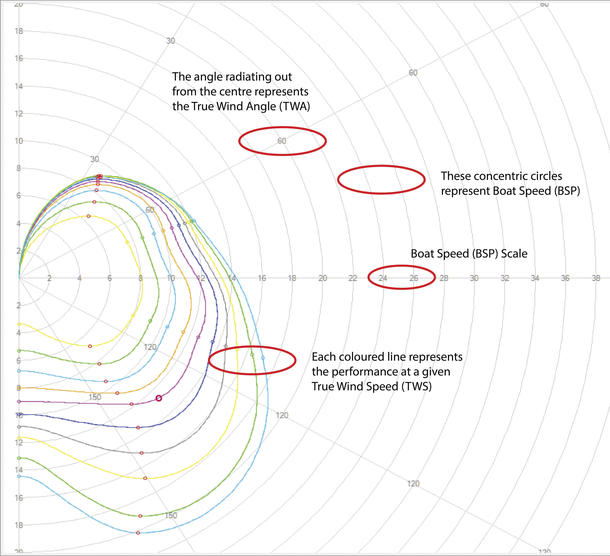 Polars in their simplest form are nothing more than “How fast I will go at a certain wind speed and at a certain angle.” However, the wealth of information contained within them is actually much more than that once you fully understand them.

From these graphs, we can see key performance elements such as when a boat starts to plane downwind vs when we should sail deep. Tactical navigation software relies heavily on various types of polars in order to give accurate feedback on laylines, times to waypoints and also weather routing.

There are three main polar types used by grand prix yachts, with some polars requiring multiple versions to give meaningful data.

The first type of polar that most people are aware of is the performance polar. The function of this polar is to give a “Target” to aim for. Designers often provide a starting point polar from their Velocity Prediction Programs (VPP). The accuracy of these theoretical predictions varies greatly between designers and is largely dependent on the amount of investment into their VPP. The most accurate designers seem to be those involved with large campaigns such as for the America’s Cup and TP52 Med Cup circuits.

What does “Target” mean? This is the BSP and TWA that you are aiming for while sailing. If everything goes 100% right in ideal conditions (sea state, wind sheer, best sails, etc.) then this is the performance you should get. In the real world, we can expect performance somewhere around 96 to 98% of this figure. We are looking to this polar to push performance and give you a set of goal posts to aim for. This applies not only to BSP, but also to TWA. In the real world you will sail slightly slower and slightly lower upwind or slightly higher downwind.

This polar is also the reference polar for performance analysis, giving a consistent frame of reference on which to compare performance from day to day, week to week, season to season. For this reason this polar is not updated on a whim, but only after careful analysis and consideration.

The second, very important polar is the Navigation Polar or Nav Polar as it is often referred to in tactical navigation software. The primary function of the Nav Polar is to provide real world performance figures to the software. The Nav Polar is a “live” polar, often updated by navigators to give real world laylines, times to marks, and weather routing. The layline angles, layline times, and opposite tack angles all come from this polar rather than the performance polar.

Navigators will invest large amounts of time in getting these polars right across a wide range of conditions, many times utilising multiple versions of the navigation polar to compensate for sail inventories, sea states and even different helmsmen. For example offshore a boat tends to sail wider angles due to different sails and sea states, where as inshore in flat water sails can be flatter and the best VMG will be at a higher angle because you don’t lose momentum in the same way as you would when sailing in waves.

Many amateur navigators simply copy the performance polar across to this polar within the software. I often find crews saying they the laylines in the “box” are wrong. Nine times out of 10 tacking on the boxes lines puts the boat around three or four degrees under the layline. This is due to the performance polar numbers being a target rather than real world.

Weather routing also depends on this polar. The more accurate the polar, the more useful the weather routing information you can generate. It is of no use running a polar that has the boat performing 10% faster than it is in the real world because that polar will have you arriving at weather features earlier. You are likely to miss the timing of a shift or front when you finally arrive at it. During a long offshore race it is not unusual to find a navigator tweaking the nav polar and re-running routing on the fly in order to get better data for decision making.

As the name suggests this polar is used during the starting sequence. It is a rather tricky polar to get right because it reflects the real world boat speeds in a prestart. This is the boat speed you can expect to achieve without a spinnaker, without every single person hiking, and given the disturbed airflow in a prestart situation. To get good data takes a lot of time and careful review of the starting sequence.