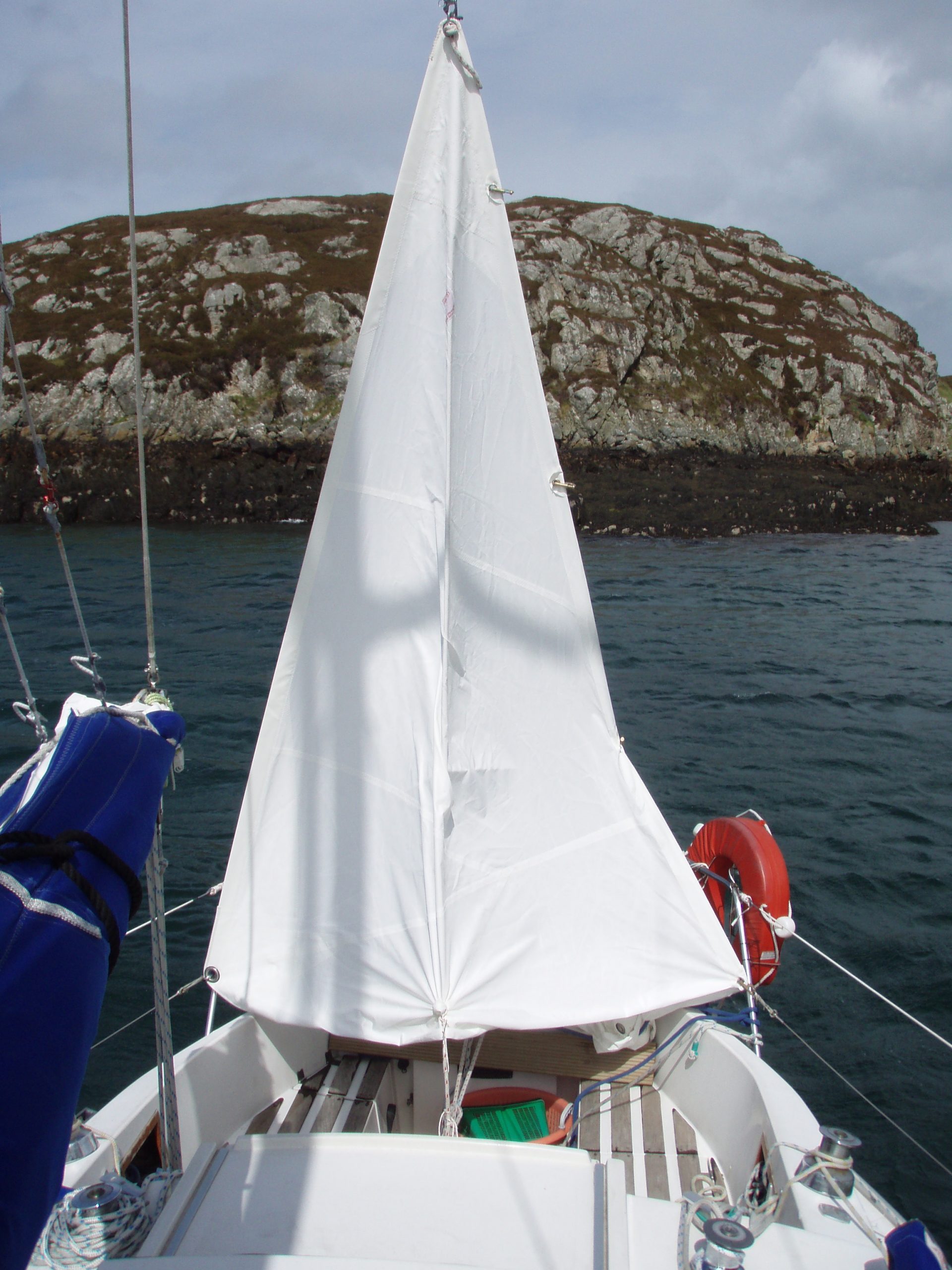 We stood transfixed under Dingo's spray hood and, wine glasses in hand, watched in horror as 70-knot winds wrought havoc on the boats to leeward.

Our friends’ 40-foot Dufour was sheering wildly, the anchor was dragging and their inflatable, tied alongside, was airborne. A French catamaran anchored abeam of them was careering back and forth, nearly colliding with the stern of the Dufour. Our friends started their motor and a scantily clad crewmember went forward, clung to the forestay and directed the helmsman as they fought to keep their boat from taking out several boats to leeward.

All around us moored yachts were gyrating, jerking and laying over around their moorings and anchors. The wind was ripping spume into the air with biting ferocity, turning Cygnet anchorage into a microcosm of the chaos occurring in bays all around the SE coast of Tasmania.

That gale of February 2014 with its storm force ‘vigorous’ front, caused big catamarans to flip at their moorings, boats to drag anchors or moorings and some to sink. The VHF channel was clogged with calls for assistance and the Bruny Island ferry was forced to run up the channel for shelter.

Once the initial shock wore off, I put my wine glass down and started taking photos while once again thanking the wedgie thrumming away above our heads. As the wind eased back to a mere gale and our friends were able to retrieve their anchor and motor to safety, it seemed timely to write this article on the wedge shaped riding sail. The story begins in Scotland.

In 2006 while living in the UK, Rejane and I became the proud owners of a half share in Gecko, a 32-foot Sadler, with the intention of exploring the 270-odd islands of the Hebrides and Orkneys west and north of Scotland.

Following the pithy advice of the Clyde Cruising Club Sailing Directions to have a 100% reliable engine, we installed a new Yanmar, vital to cope with the powerful currents in the Orkneys where the summer winds can drop out to a dead calm leaving you to be swept towards all manner of awful reef and overfall. It seemed Gecko's radar would also be necessary for the pea soup fogs associated with those calm spells. Finally, having invested in a handheld GPS and booted up an old Toshiba laptop with admiralty charts, we set sail from Fleetwood (NW England), via Barrow in Furness, Whitehaven and Belfast (Northern Ireland) for Dunstaffnage marina near Oban in Scotland, our base for cruising for the next two years.

With all the talk of calms and fog we were left wondering about the notorious North Atlantic gales but, as the first summer’s cruising polewards of latitude 56° got under way, pondering soon gave way to reality. The Hebridean weather turned out to be a steroidal version of Tasmania's, but with warmer water courtesy of the Gulf Stream. To this mix, just add generally deeper anchorage depths, mighty kelp beds, ubiquitous craypots and the superb Coast Guard and Royal National Life Boat Institution volunteer rescue service. Not to mention the whisky and hospitable islanders!

During that first season we sampled the delights of Jura, Mull, Canna, Eigh, Rum and Skye. It is perhaps worth saying here that we had not been sailing for 15 years since we swallowed the anchor after an epic 20-day mid winter crossing of the Tasman Sea; connect the dots on that one! We were somewhat overawed by the sense of isolation and the lack of other yachts.

Considering the tens of thousands of yachts in nearby England and France, we had expected flotillas; instead we rarely shared an anchorage once more than a day sail out of Oban. Fortunately for us and this story of the 'wedgie', the day we eventually crossed the Sea of the Hebrides to the outer island of South Uist and came up to anchor off the pub in Loch Boisedale, there was another yacht already there.

Within minutes, an elderly gent hove alongside in a weathered Avon and our delightful friendship with Keith Stanley was under way. This ancient mariner, a native of Inverness, had sailed these Hebridean waters for over half a century, was a recently retired RYA instructor and had just sailed his yacht with his doughty partner to 70° north up the Norwegian coastline. Keith became our mentor for high latitude cruising and, whenever we got into a tight spot, Keith would ping us his cogent advice by text.

However, it was on that very first meeting that Keith gave us one priceless piece of information when he told us of the need for a two-wing wedge riding sail in these wild waters. Riding sails have been used for hundreds of years to stabilise boats at anchor to prevent, or at least lessen, the sheering motion that can develop as the wind picks up. This maddening and potentially dangerous anchor dance affects some yachts more than others, especially lighter, faster modern hull designs. But as wind speed increases even boats that normally lie well will eventually start to sheer. Gecko was no exception and tongue in cheek we rated her as a six out of ten on our 'international sheering scale' standardised to a force eight gale.

This sheering motion can be wearing on the nerves and tiring especially when it becomes violent with the boat rolling savagely to leeward as it is jerked back around at the end of the 'tack'. Yet a far more dangerous possibility is sheering's potential to break out even well set anchors.

Traditionally a ketch would hoist the mizzen to achieve the aim of holding the boat bow into the wind. Other techniques to reduce sheering are setting two anchors, an anchor or drogue hung off the anchor chain in the bow, a line from abeam to the anchor chain to offset the angle of attack, a bucket or drogue hung off the stern, or even anchoring stern to! None of these techniques are particularly efficient. Some even seem like acts of pure desperation while others are unseamanlike, being positively dangerous should a dragging anchor need to be urgently hauled and redeployed.

Keith had come up with his elegant solution to the sheering problem many years ago on the Orkney Islands during a force 10 North Atlantic gale in Scapa Flow. He had hoisted the mizzen of his ketch to steady the boat but, as the wind speed increased, the sail began to flog violently until it literally exploded. His solution was to jury rig the storm jib as a two-wing wedge riding sail off the backstay.

Keith quickly sketched the rig for us and, on the morrow, rowed over again to help set up our storm jib as a 'wedgie'. Subsequent gales saw us increasingly proficient at rigging the sail, which held Gecko steady when normally she would have been sheering wildly.

It was during one force nine gale, when we were moored upwind of two other yachts, that the full impact of the technique became obvious. With our wedgie rigged in the stern we watched as our neighbour started to sheer violently from side to side. The next day they came over to ask how that “funny sail” worked, as the motion on their boat had been so bad they had been forced ashore.

Returning home to Australia, we bought Dingo, a 40-foot steel Van Der Stadt and had a bright orange storm jib made up with simple modifications to make it easier to rig as a wedgie. This served us well on a circumnavigation of Tasmania.

Two years after that, while completing our circumnavigation of New Zealand, we had a smaller winged riding sail made up in Wellington. This sail looks inadequate for the job of keeping Dingo's 12 tons of steel sitting pretty but it works a treat. It attracted much attention in the Bay of Islands when a two-day force 9 gale filled the best anchorage with a fleet of boats. One of those boats, Valkyrie, reporting that the sheering had become so bad they had feared to capsize and had donned lifejackets and foul weather gear in the cabin.

Dingo sheers a little in lower wind velocities with its small wedgie up, but as wind speed increases the riding sail gains power and,
right when you need it in gale force winds, it holds her steady a point either side of the wind. Steady enough so that in that Cygnet gale, while multihulls flipped, moorings and anchors dragged and boats all around sheered madly, Dingo sat plumb.

After every blow in crowded anchorages we end up with the same queries: “how does it work,” “what's that sail for”?

Word is spreading. The last person who calmed his wildly sheering yacht down with our old storm jib version was Patrick Taberly, younger brother to famous French sailor Eric. Patrick and his wife had arrived in Tasmania via the Antarctic Peninsula and their boat sheered even in light winds.

The advantages of the wedgie riding sail are its small size, it does not flog and it does not hinder any necessary rapid movement of your boat if that becomes necessary. Once you have a sail of the right size, designed to fit your boat, it can be deployed in minutes and dropped in an instant.

While one can buy standard riding sails off the web, I think it is better to design your own to fit your boat exactly. If you have a single backstay and nothing in the way then it's a simple task hoisting the sail with your topping lift, main halyard or a spare halyard. However if you have double backstays, a gantry topped with antennae or a bimini, you hoist the sail up your mainsail topping lift as we do on Dingo, using the main halyard or a spare.

It's easy enough to make your own or get your local sail maker to do the honours. We are now on our mark 4 sail, designed to fit Dingo exactly, made up by Russel at Storm Bay Sails down the channel, Tasmania.

At one point I thought I knew all about these riding sails but, lo and behold, when I recently bought a copy of Hal Roth's excellent book 'Handling storms at sea', there on pages 77 to 81 was an exposition on winged riding sails in the context of holding modern yachts bow to wind in storms when at sea anchor. It appears that the hardy Norwegian fishermen had been using this type of sail at anchor since Noah was a sea cadet.

We now deploy the wedgie more frequently than we ever hoist our storm jib for its conventional application and it is our contention that a wedgie should be as much a part of a yacht's sail wardrobe as a storm jib.