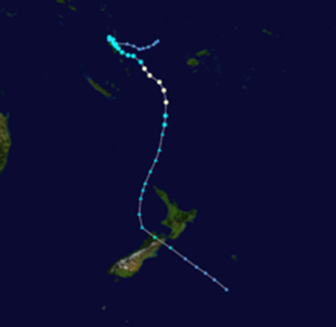 In 2014, Mark Hipgrave and two friends set off from Queensland to deliver his Beneteau 36 The Healer to New Plymouth in New Zealand for the start of the Solo Tasman Race. He employed professional weather router Bob McDavitt to guide them on their journey. Here's Mark's story:

In the early days, weather routing services were used by racers, to get an edge on competitors prior to a race start. Nowadays, with satphone and email connectivity available on yachts for minimal cost, it seems stupid not to avail yourself to this potentially lifesaving service.

Like Cherylle and Geoff Stone, I have become a huge supporter of the use of these services by cruising yachts and now, would not contemplate an ocean passage without consulting one.

I became convinced of their benefits during a delivery trip in March 2014 from Brisbane to New Plymouth NZ.  On a recommendation from a friend we engaged Bob McDavitt (MetBob) to provide a forecast and a route for the planned ten day voyage in my 36’ Beneteau. Bob operates out of Auckland and his main clients are people cruising the Pacific, but he is perhaps best known for his work providing routing and weather services to Jessica Watson during her round-the- world voyage in 2009/10.

On March 5 Bob emailed me a route based on the following situation:

HIGH is expected to slowly cross the Tasman Sea along 40/45 South during the next week.

After 12 March a mediocre front should cross the south Tasman Sea followed by another HIGH.

Too far away to give much details of this front yet,  — I think it should help your arrival  by bringing some NW winds.

I have added zigzags to the route to make best use of the current rivers and the areas where wind in NE (g SE) and E/ESE (go NE), but these may indeed change and so the route you take is very flexible.

Winds were expected to be less that 20kts for the duration of the trip.

The trip commenced uneventfully on March 6, but by March 11 it became apparent that Cyclone Lusi (which had caused severe damage in Vanuatu) was maintaining intensity and continuing down into the eastern Tasman and would perhaps travel as far south as the top of the NZ south island. We got this news via email from Bob, and after some satphone discussion, considered three options including:

Head back NW to Lord Howe Is and sit things out

Head SE for Westport (and brave the bar), rather than New Plymouth

After lots of email and more satphone discussion on March 13 and 14 , we decided on a third option which was to continue on our voyage, SE towards New Plymouth, but go no further east than lat 165E. Then we would head slowly north on that latitude while the cyclone passed on its expected southerly course to the east of us. Bob’s instructions were clear.

“Head slowly north, staying west of 165E. Watch the barometer fall. When it bottoms out and starts to rise then it will be safe to turn east and head to New Plymouth.”

This we did. We arrived at this lat at 39 S at 1400 on Fri 14 March (Bris time), put the mainsail away and headed north with a small headsail up. Initially winds were 10kts from the SE, but the baro kept dropping and swells increased. We stayed with this configuration for around 36 hours until 0100 on 16 March, getting as far north as 36:40 when the baro started rising.

With a SSW of 20kts we headed NE for the next few hours, then turned ESE to our destination. Daybreak showed the huge ‘wheel’ of dense cloud to our south – the remainder of the storm.

The rest of the trip was uneventful, other than the two day excursion north putting a strain on our food and water resources, and we arrived into New Plymouth around midnight on 18 March.

Bob’s advice and guidance during this event was invaluable and I’m in no doubt prevented us from sailing right into the path of the storm, with potentially disastrous consequences.

The storm’s history is recorded as follows:

“During March 9, NZ MetService started to warn that a tropical weather system might affect New Zealand by the end of that week.

Cyclone Lusi hit New Zealand shores on the 13th of March. In preparation for the event the New Zealand government advised people to fix loosened things (such as trampolines), and the Civil Defense team was put on alert. Winds reaching up to 130 km/h were expected to occur in the cities of Auckland, Whangarei and Hamilton, and the east coast of the North Island was put on high alert. Lusi brought severe winds as it moved southeast towards Wellington and the northern South Island in the evening of March 15. On March 16, the severe gale winds slightly weakened, and Lusi pushed away from New Zealand on March 17. The Metservice said Westport was battered with the country's strongest winds on March 17, with 130kmh winds recorded at 3pm.”