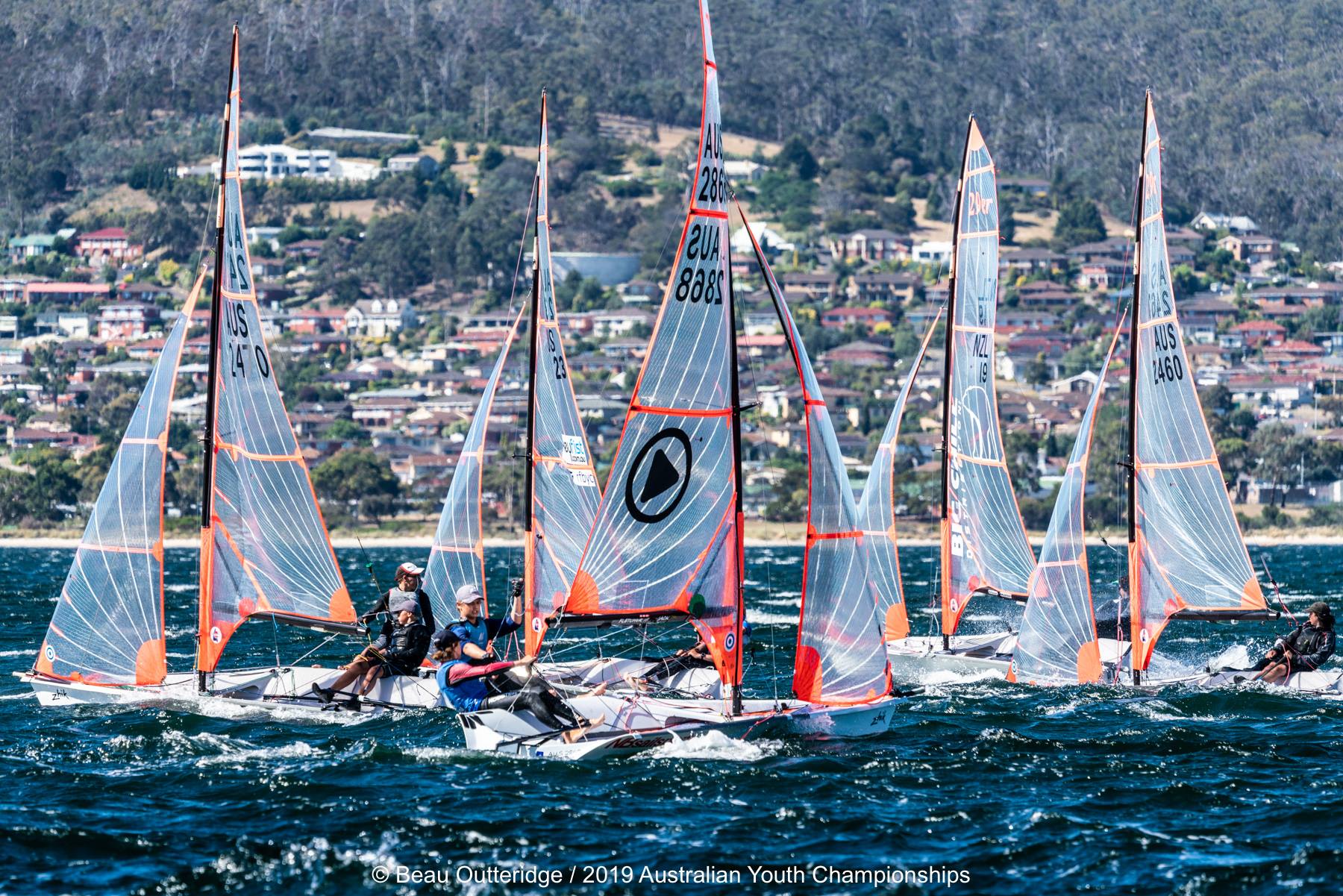 The 2019 Australian Youth Championships presented by the Australian Maritime College kicked off today in Hobart, with challenging conditions that delivered some spectacular results.

Doubling as the National Championship, the Championships are also the final selection event for Australia’s best young sailors to represent Australia at the 2019 World Youth Championships in Gdynia, Poland.

Circling winds dropped in and out, at times disappearing altogether. Despite the inconsistency, all classes got two races in. The athletes who showed patience were rewarded towards the end of the day with gusts taking them to early leads.

Reigning World Laser Radial champion, Zac Littlewood, showed why he is the athlete to beat in the class, recording two bullets in the opening two races. The Western Australian heads in to day two ahead of Queensland’s Frazer Brew and NSW’s Otto Henry.

The Bic Techno 293s were first ashore, having been tired out by the inconsistent winds, with Queensland’s Ben Waters and Western Australia’s Kai Marns Morris sharing the lead after each bagging a first and a third in the first day of racing.

Royal Queensland Yacht Squadron’s Morris was happy with his results, if not a bit frustrated by the conditions: “Today was a bit mixed in regard to the conditions. It was on and off pretty much all day, only really picking up just before we got sent in after the second race.”

Another Queenslander, Hamish Swain from Whitsunday Sailing Club and Royal Queensland Yacht Squadron, was the runaway leader after day one in the BicTechno Plus after recording two bullets.

Hamish has come to the Championships with some strong form, having recently won the class at both Sail Melbourne and Sail Brisbane. He now has a firm eye on securing a representative spot on the RSX board at Ggynia.

It is the second week in Tasmania for many of the fleet, having come straight from the 9ers National Championship. Race one winners, Brewer and Twomey managed to “play the shifts well at the course and hold the lead. In race two the breeze decided to kick a bit, with a few boats capsizing,” Brewer noted.

The challenging conditions weren’t lost on Principal Race Officer, David Brooks, who noted at the completion of competition: “It was a long hot day, with the breeze starting off very light, meaning we thought we could fit some racing in.

“We were shifting around all the courses and did get some races in early. Later in the day we had this nice big strong wind come through. We hung in and saw some great racing towards the end of the day.”

Results were mixed in the 420 class, with NSW’s Ryan Littlechild/Jack Ferguson the best placed after recording a first and a third. Chelsea Higgins/Indiah Kelsey from Brighton and Seacliff YC finished the day in 14th place.

The Victorian pair were remaining positive, Higgins noting that “Today was a pretty rough day on the water with lots of cancelled races, but we did really well in the first race and got sixth overall.”

The team is aiming for a top three finish in the Girl’s entrants and hoping to pick up the pace in in the next days.