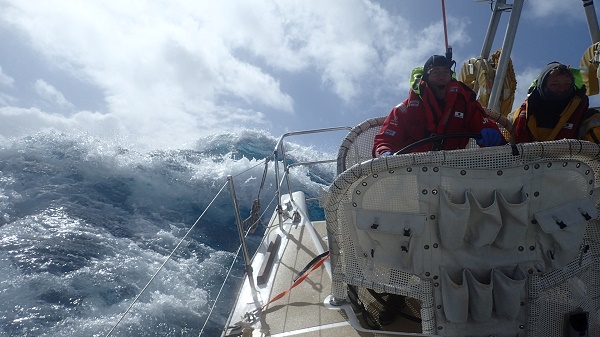 Seattle may be drawing ever closer but the Pacific Ocean’s power is unrelenting, making the final miles to the west coast of the USA an incredible final test of seamanship for the hardy Clipper Race Skippers and crew.

Following the knockdown of Da Nang – Viet Nam yesterday morning, it was sixth place Garmin’s turn to take the brunt of the Pacific’s full force. Skipper Ash Skett explains: “It's been a horrendous 24 hours on board, and probably the toughest night and day of the whole race so far for us. It all started late last night. The wind built and brought with it a huge, steep sea which was to cause us a whole world of issues. (Click here to read the full statement.)

“It was certainly one of the hardest days at sea that I have ever experienced but I'm pleased to say that after a herculean effort in making repairs and securing broken bits through the whole of today by the entire team, we are now sailing again and back in this race.

“I am hugely proud of this amazing bunch of people and how they all pulled together in a time of crisis to get the job done. They deserve tons of credit for their amazing work in truly extreme conditions… never before has the power of the sea been so apparent. It demands respect and you better give it or it will make your life hell.”

Already finding positives to focus on however, Ash adds: “Only after all this drama did I find out that we are leading the Ocean Sprint….by a single minute! I had no idea it would be so close. There are still a few boats to complete the sprint yet so we will have to wait and see how it all goes. Right now we need all the extra points that we can get. Fingers crossed!”

Ninth placed Visit Seattle was fighting a similar battle against the Pacific this morning in a wind state blowing 50 to 80 knots. Skipper Huw Fernie reports: “This one is worth writing home about, the biggest storm I have ever seen is currently blowing outside. This time we're lucky enough that it has been giving us a push in the right direction. It's also nice that we have done this before; once or twice I think during the whole race.”

“When it comes on like this there is little we can do, the waves are huge, and keeping any control over the yacht is more up to them than it is up to you. So we do what we can, the mainsail is lashed to the boom, the mast braced and the smallest of sails is dragging us forward at about average speed over the last few days. Everything is doubled for safety and then we sit back and watch one of nature’s great spectacles.”

Commenting on the conditions faced in the Pacific over the past couple of nights, Clipper Race Director Justin Taylor says: “Any ocean can be unpredictable but the Pacific Ocean is the definition of this.  Mother Nature’s power commands respect over everything within her grasp and she hasn’t let us down now. When the ocean is angry, its force is truly frightening and it requires a level head to get through it, just as the Clipper Race teams have demonstrated. Its powerful waves build up and will swipe from all angles. It requires excellent seamanship and leadership skills to navigate it safely.

“Respect is always given to the Pacific itself, but it should also be awarded to the Clipper Race Skippers and crew who have faced the horrendous conditions of these past few nights, and put their training into action to work together to stay safe on board and overcome the challenges.”

At the front of the fleet, Derry~Londonderry~Doire looks certain to claim its third straight race victory, as it is now within 70 nautical miles of the Seattle finish line, and over 100 miles ahead of second placed Unicef.

Skipper Dan Smith says: “We came out of Stealth Mode still with a respectable lead and by lunch time we were getting winds of 40 knots with big waves consistently. This meant we had excellent surfing conditions, speeds into the 20s and a couple of exciting gybes to get us on track for the finish line. Winds eased as darkness fell so with steady breeze we are rolling along nicely towards the finish with just over 100 miles to go. Fingers crossed it holds all the way and that there isn't too much more excitement to come on this race for us.”

Whilst the Northern Irish team has run away with the lead in the final stretch, the race for the second and third podium places is far from over. Olivier Cardin, Skipper of third placed LMAX Exchange explains: “Racing against Unicef is closer and closer. Since yesterday we are together, playing some match racing games in heavy weather and huge waves.

“Early this morning, the wind picked up fast with some aggressive squalls. After two hours, we were sailing deep downwind with two reefs in the mainsail and Yankee. This morning was really impressive with wind at more than 50 knots, white sea, scary clouds and monster waves. Before midday, as the wind eased around 35 knots, we were able to do a safe gybe and make a better course to the finish line. We gybed again as the wind began its shift to the left.

“Each time we gybed, Unicef did the same. And each time we crossed very close. Now, it's a long run to the finish line with 230 nautical miles to go.”

GREAT Britain is fourth, with ClipperTelemed+ 40 nautical miles behind in fifth, and Garmin still pushing approximately 35 NM behind that.

Currently in seventh place, Mission Performance has under 350 nautical miles remaining to Seattle, followed by Qingdao, with Visit Seattle in ninth, PSP Logistics in tenth and IchorCoal in eleventh, all within the final 1000 nautical miles to the Emerald City.

Da Nang – Viet Nam Skipper Wendo Tuck has reported that the team is back sailing after yesterday’s knockdown and making good speed towards Seattle.

Will Garmin hold onto its Ocean Sprint record? Who will win the battle for second and third position? What time will Derry~Londonderry~Doire win Race 9, the Seattle Pacific Challenge?