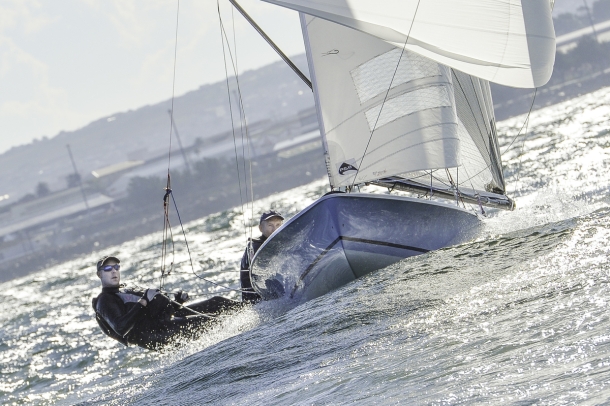 Day 3 of the SAP 505 World Championships saw the return of stronger breezes to Algoa Bay in Port Elizabeth, South Africa. Mike Holt and Carl Smit were the pathfinder boat for the first race of the day, but the reigning World Champions found no benefit in having to sail to the right-hand side of the course, while early-out-of-the-gate Ian Pinnell was pleased that his hunch about the left proved correct.

Crewed by Johannes Tellen from Germany, Great Britain’s Pinnell led the fleet around the first mark and after the first lap was never seriously challenged by Sandy Higgins and Paul Marsh, with the Australians finishing 2nd behind the 2008 World Champion. Meanwhile, Holt had made a great recovery to cross the line in 3rd place.

In race 2, former World Champions Howie Hamlin and Jeff Nelson opened the gate, but it was those other Californians – Holt and Smit – who just couldn’t be stopped in the building breeze. Malcolm Higgins and Nick Johnston were incredibly fast on the upwind legs, but struggled to hold back the reigning World Champions and the Australians eventually came in 4th place. Ted Conrads and Brian Haines are turning in a consistent set of scores, and the Californians came 3rd across the line behind 2nd placed Pinnell, who was the most consistent performer of the day.

Both Holt and Pinnell have been racing the 505 for more than 25 years, but both veterans reckoned today’s sailing conditions – blue skies, warm water, 18 knots breeze and big waves – were among the very best they have ever experienced. “It was really hard work, but great fun,” said Holt. “It really doesn’t get any better, and the team that didn’t show up for these Worlds will be kicking themselves for not coming.”

Tuesday is a day off from competition, and while Holt will spend a relaxed day in Port Elizabeth just doing a few boat checks, others are off on safari or going on road trips along the beautiful South African coastline. Then it’s back to the action on Wednesday, when the live TV coverage also kicks in for the final three days of competition. Catch up on all the news, interviews photos and videos at SAP505Worlds.com