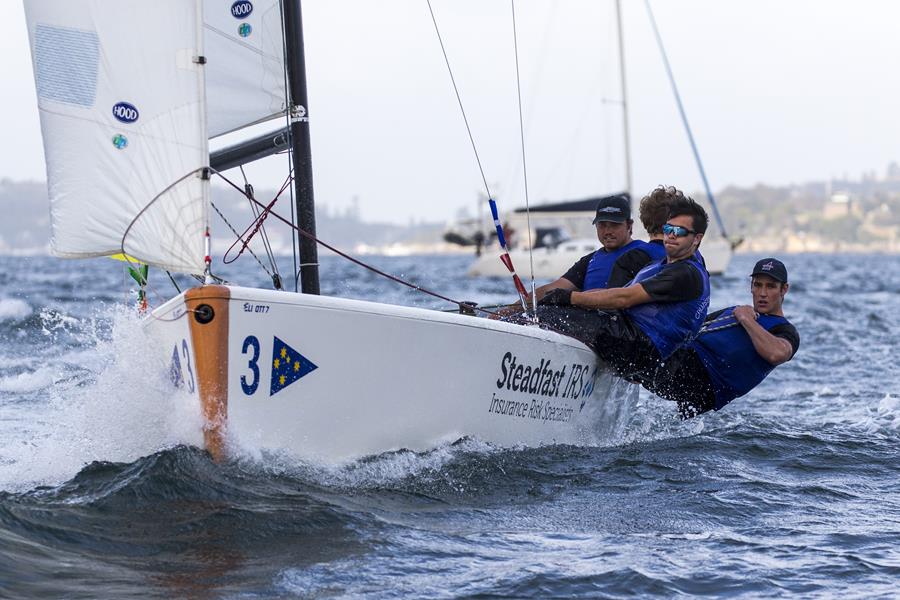 It was third time lucky for Hodgson, who until today was undefeated in the Championship. Hodgson and his crew, from the Cruising Yacht Club of Australia, won 15 races in a row throughout the round robin and semi-finals. Their winning streak came to an end in the opening race of the Finals against a fellow CYCA team skippered by Finn Tapper.

Tapper came from behind in the opening race to hand Hodgson his first loss of the event, in the first to two Finals series, after Tapper defeated Will Sargent from Tasmania 3-0 in their semi-final.

In the petit-final, controversy ruled throughout, with Alistair Read Black Flagged in Race 1 after a wrong penalty flag was flown. This gifted Will Sargent from Tasmania with an early lead, but Read came striking back.

In Race 2, the boats were even at the top mark, but just after the spinnaker set, Will Sargent’s halyard failed, with his spinnaker dropping in the water and halting any chance of a 2-0 victory.

In Race 3, Sargent composed himself and came out firing, sailing higher and faster to eventually seal the final podium spot in third place.

It was always going to be tough day for all the competitors, with a strong southerly on the forecast which arrived just after midday. Coming through at 30 knots the race committee had no option but to stop racing for two hours.

When racing did eventually get back underway, the Finals went down to the wire in three races. Hodgson clawed back in Race 2, but only just beat Tapper after a finish line infringement saw Tapper penalised.

In the winner takes all final race, both boats started evenly, with Tapper just to windward. A close beat to the top mark made sure the boats neck and neck, with Hodgson only gaining a slight advantage as they approached the top mark.

With the breeze now shifted around to the south-east, both boats chose opposite sides on the downwind leg, but it was Hodgson that made the right call. He and his team took a six length lead and never looked back, taking his first Australian Youth title after finishing runner up for the past two years.

This is the fifth consecutive year the Cruising Yacht Club of Australia has won the title, and a third year in a row of securing a position in the top two final.