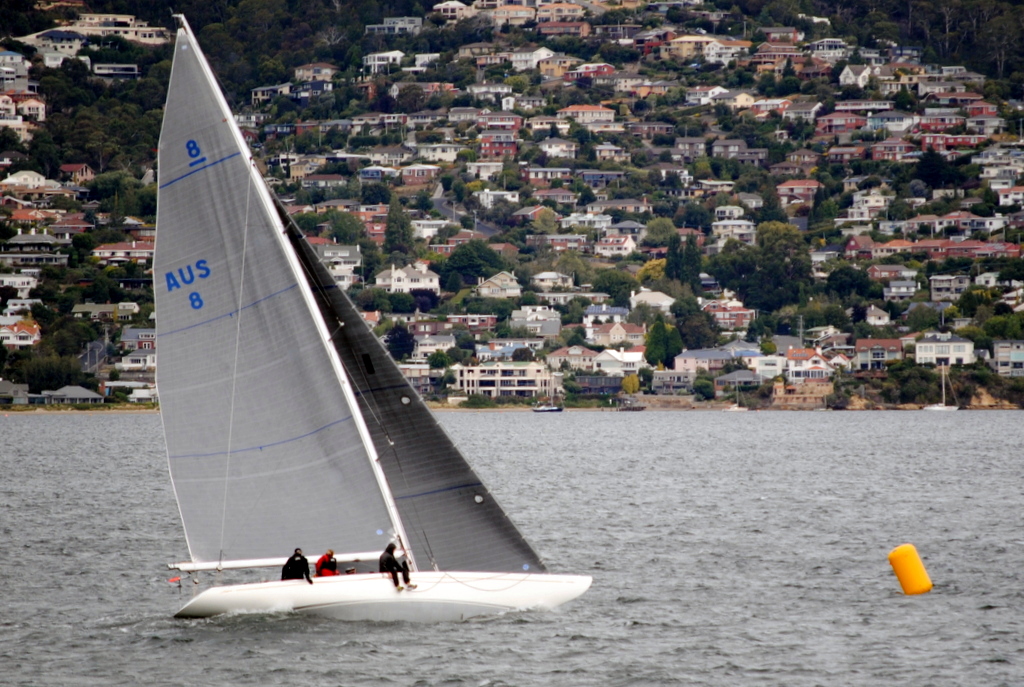 Winter racing on Hobart’s River Derwent for 2018 has ended with a day of exhilarating sailing in a 20 knot west-nor’-wester, gusting to 34 knots.

Each of Hobart’s three major club runs a five-race series although the Derwent Sailing Squadron managed only four Sunday morning races and in all but last Sunday’s final race bitterly cold and wild weather kept most crews ashore.

On the first spinnaker run Oskana was hitting 20 knots-plus as she surfed across Sandy Bay, gybing downwind towards the leeward mark off the John Garrow Light.

Pritchard has been using the Winter Series to begin the preparation of Oskana and her crew for this year’s Melbourne to Hobart West Coaster ocean race.

Explaining his decision to compete in the West Coaster, Pritchard said: “It’s such a challenging race, and now with the change in rules allowing boats like ours to compete with our crew qualifications, I would imagine more boats will take the opportunity to enjoy the stunning beauty and untamed coastline of the Wild West coast of Tasmania.”

In the DSS Winter Series, Oskana, Kindred Spirit, skippered by Alistair Douglas, and the Latham Syndicate’s J24 Another Toy the only three yachts to have sailed in at least three races.

Oskana missed the first race, but won Division 1 overall while Kindred Spirit, a Mottle 33, completed all four with three wins to take out Division 4. Another Toy won Sunday’s final race to clinch an overall victory in Division 2 with a series score of 1-2-1.

The 30-34 knot squalls hurtling down from Mount Wellington provided challenging conditions for the fleet with the two classic 8-metres, Juanita and Juana, relishing the strong breeze although forced to feather their big mainsails when hit by 30 knots and more off Maning Reef.

Although Oskana scored a comfortable line honours win, handicap honours in the final race went to Juanita, with Jock Young on the helm.

Only two boats started in Division 3 with Kindred Spirit winning a close fought match race from Cool Change (Chris Bobbi), 29 seconds across the line and 44 seconds on corrected time.

The first of Hobart’s spring/summer yacht racing will be the 50th Pipe Opener Series, starting with a night race from Hobart to Garden Island down the D’Entrecasteaux Channel on starting at 7.00pm on Friday week, 21 September.

Oskana will be joined in the Ocean Racing Club of Victoria’s Melbourne to Hobart by another well-performed Tasmania yacht, David Aplin’s Mbd35 Whistler.

Whistler has also been entered for the Australian Yachting Championships on Melbourne’s Port Phillip in January 2019.