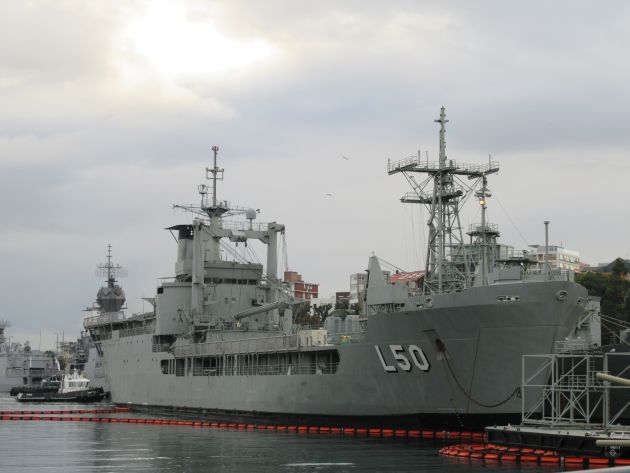 Queensland, and particularly Bundaberg, scored a major coup late last year when Bundaberg was chosen as the location for the the ex-HMAS Tobruk to be prepared for scuttling.

Withstanding challenges from other southeast Queensland cities, Bundaberg won the right to prepare the former Royal Australian Navy landing ship, launched in 1980, for sinking at a site between Bundaberg and Hervey Bay where she will continue serving the nation as a wreck dive site.

Maritime Safety Queensland was represented on the inter-agency working group that put together the successful Queensland Government bid to the Australian Government to bring ex-HMAS Tobruk north to her final resting place.  We provided key nautical advice and oversaw her safe arrival in Bundaberg.

We’ll continue to provide advice and support-in-kind to the Queensland National Parks and Wildlife Service, Department of National Parks, Sport and Racing, who are managing the preparation of the ship for scuttling.

The project is already proving a real boon for Bundaberg. Significant public interest is already being achieved, as evidenced by the large public gathering just before Christmas 2016 to watch the ship enter Bundaberg after she was towed from Sydney’s Garden Island naval base.

But that was just the start. It will take up to two years to get the ship ready for scuttling. Dredging must be done to maintain safe depths at her berth and she also must be stripped of pollutants, cables and wires and rendered suitable for diving purposes, with safe access and egress points and any dangerous areas made inaccessible. Local companies will be in a great position to tender for this work.

After she has been scuttled, which will be an event in itself, ex-HMAS Tobruk will provide a new dive experience that will benefit the Queensland economy for many years to come.

If the experience of ex-HMAS Brisbane, scuttled off the Sunshine Coast in 2005, is any guide ex-HMAS Tobruk could provide a year-round attraction for over 5,000 divers per year, with an annual economic impact of $1.5 million.

This will be a real shot in the arm for the Bundaberg/Hervey Bay/Maryborough area and reflects the government’s focus on the creation of jobs in regional Queensland.  Maritime Safety Queensland is delighted to be a part of that.