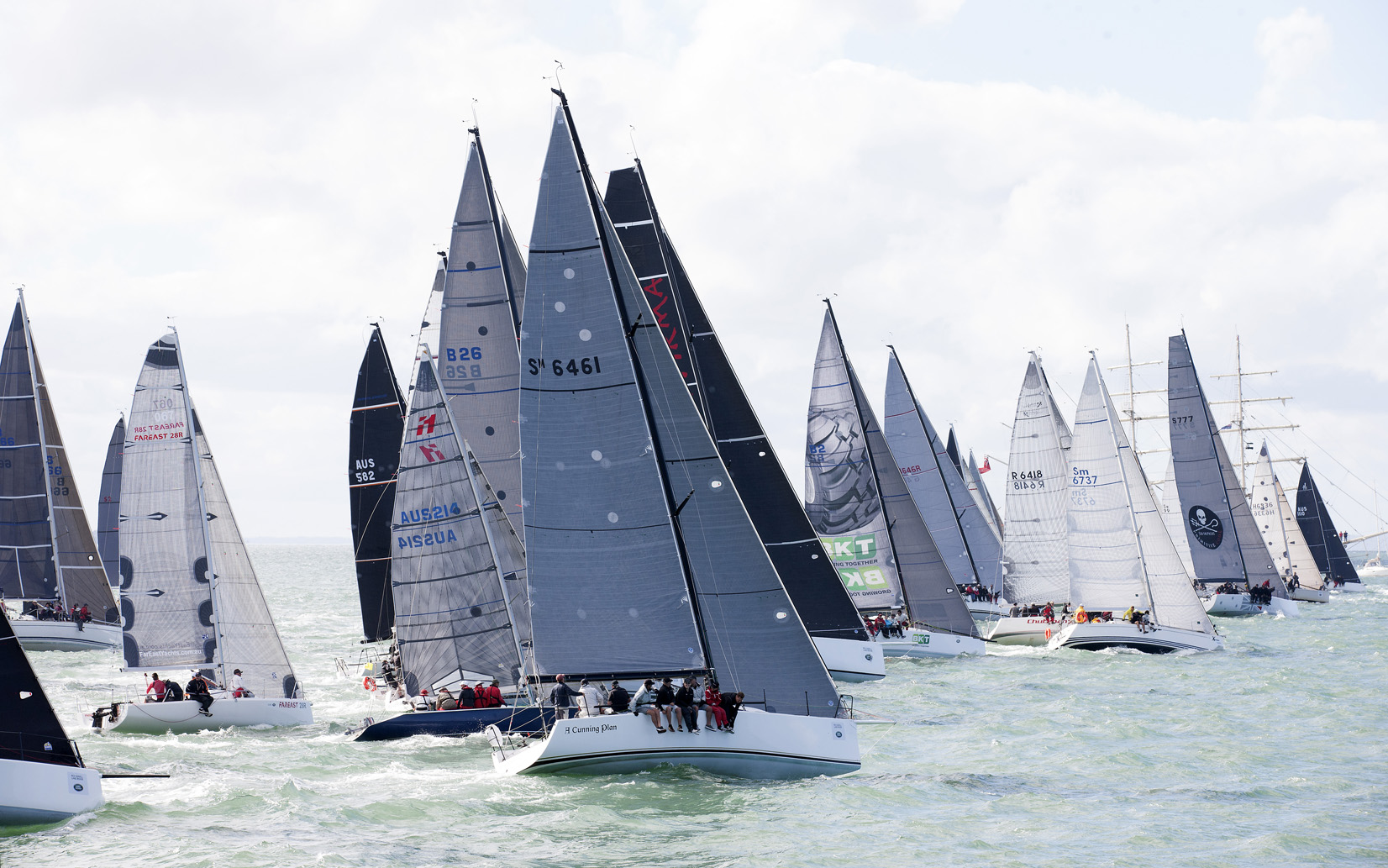 Line honours in the 174th Melbourne to Geelong Passage Race, the curtain opener to the Festival of Sails, was a repeat of the 2016 finish with Geoff Boettcher’s TP52 Secret Mens Business (SA) the first monohull and Bare Essentials (VIC) the first multihull across the finish line.

Dramatic clouds over Melbourne city and 10-12 knots sou’west winds farewelled the fleet of 220 boats of mixed sizes, and sunshine, flatwater and building sou’east winds greeted them at the finish off the Royal Geelong Yacht Club, the host club now welcoming around 2,000 sailors.

“Everyone had a go at winning; I think we came to the front at the right time,” Boettcher said of their exciting line honours battle with Ray Roberts’ Farr 55 Hollywood Boulevard during the final approach to the finish on Saturday January 21, 2017.

“Our tussle with Hollywood was excellent, he’s been stamping on us for years but hey that’s sailing. As we weren’t quite as fast as him we just had to wait until he made one mistake. Once we got in front by a couple of boat lengths we felt more comfortable,” admitted the South Australian skipper.

Roberts congratulated Boettcher and his crew once tied up at RGYC, jesting, “You put us under pressure and we buckled. You are the only other boat skipper who’s made me cry. Good race!”

Hollywood Boulevard had a sail issue at a crucial moment and Secret Mens Business pounced on the foul up.

Victorian AFL legend Robert ‘Dipper’ Dipierdomenico was on Hollywood as a guest and laughed, “I’ve never lost at Geelong – this is the first time, and I’m disappointed. I’ll be back next year.”

“It was a hard slog all the way down then a good surge up the main channel to the finish,” Tim Pepperell, skipper of the first multihull, Bare Essentials, said.

For the 174th time the Melbourne to Geelong Passage Race began at the top of the vast expanse of Port Phillip and took the fleet 34 nautical miles in a south west direction to the buzzing regional city of Geelong.

Marking one end of the line was the tall ship Tenacious, dwarfing the fleet as they leapt headlong into SW winds, signalling the 174th start of the historic Passage Race and the Festival of Sails open.

There was drama in the pre-start when Make My Jay, Glenn Taylor’s J24 from Sandringham Yacht Club, and Shane Kearns’ S&S34 Komatsu Azzurro from Sydney came into contact, rendering damage to both and ending Azzurro’s Festival of Sails campaign before they’d crossed a start line.

Kearns’ spinnaker pole was sticking out and as Make My Jay suddenly appeared and the two boats passed each other going in the opposite direction the pole became a jousting stick, bending stanchions on both boats and sheering the J24’s bow fitting, which holds the forestay and which in turn holds the mast up, off.

Taylor raced back to Sandringham and managed a makeshift repair that has allowed them to continue to Geelong this afternoon to be part of the festival.

With a broken spinnaker pole and other damage, Kearns’ series was over before it began. “We could say it was our shortest regatta but we didn’t even make it to within the five minute warning signal of race one. It’s disappointing for both boats; we came on from the Sydney to Hobart to do this regatta,” Kearns said.

Back at Corio Bay the sports boats began their Gill sponsored series with two windward/leeward races.

Julian Newton’s Game On is the early pointscore leader.

The forecast for day two of the Festival of Sails presented by Rex Gorell Land Rover, Sunday January 21, is variable winds 10 knots building to S-SE 10-15kts in the afternoon. All divisions will race either windward/leewards or a medium distance race from midday onwards.