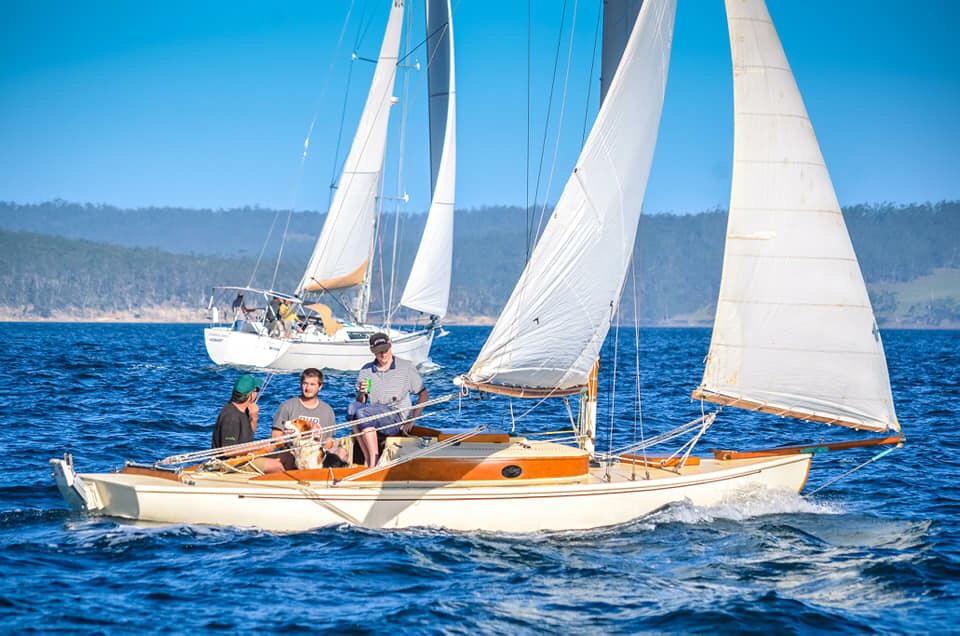 A huge event, it continues over the Royal Hobart Regatta long weekend with another major maritime event, the Bruny Island Yacht Race, first held in 1898, starting on Saturday morning on a course that circumnavigates the elongated island south of Hobart.

On Sunday, harbour racing yachts will be competing for the historic Lipton Cup as part of the 181st regatta.

More than 500 craft are one display. from restored clinker dinghies built more than a century ago, to one-time ocean racing yachts, famous speedboat designs, the last of the Tasmanian trading ketches, a regal steam yacht, historical Sydney 18-footers and the last half dozen Derwent class yachts and several tall ships.

The Festival began today with a spectacular parade of sail up the Derwent from Sandy Bay to Sullivan’s Cove, where the Festival is centred around historic Constitution Dock.

While most craft will remain in their berths over the weekend, the few remaining famous Derwent class yachts and three historical Sydney 18-footers from the Sydney Flying Squadron will compete in special demonstration sailing events on the River Derwent over the weekend.

At 1.30pm on Saturday, the Royal Yacht Club of Tasmania will start the six Derwent classers and three 18-footers from off Castray Esplanade to sail a river course, with a rounding mark in Sullivan’s Cove.

The 18-footers, which have been trailered down from the Sydney Flying Squadron, Australia’s oldest open boat club, will be out again on Sunday, also starting from Castray.

The 18-footers, replicas of the original wooden skiffs that raced on Sydney Harbour in the early 20th century, are Britannia, Yendys and Topweight.

Smith will also give an illustrated lecture at the Wooden Boat Festival on the history of Sydney 18s at the Deschaineux Theatre at 10am on Sunday as part of the Symposium.

Famous Irish yachtsman, Harold Cudmore, will be at the helm of Yendys, the replica of another great skiff, while Topweight will be sailed by Alan Robertson.

On Sunday afternoon, the six Derwent classers, all from Kettering Yacht Club, will sail in their ‘Worlds’, starting and finishing off the Royal Hobart Regatta grounds. They are all skippered by sailors in their early twenties who have lovingly restored the ‘Ds’, as they are known to their owners who, in several instances, include their fathers and families.

Oldest in the Derwent class fleet is Goblin, built in the 1920s and now owned by Philip Myer, to be skippered by Gus McKay.

McKay’s younger brother, Ollie, will be on the helm of Janus, which he owns in partnership with his father Brett, owner/skipper of the ocean racing yacht Rad.

Merlin is owed by Steve Reid and his 18-year-old son Dillon, who will be helming at the weekend, while former champion International Cadet sailor, Alec Bailey, will skipper Salamis.

Also from Kettering will be Peri, owned by the Maxwell family and skippered by Ollie Maxwell, while Nelson Brown will helm Gnome, built in 1929 by the legendary Tasmanian boat builder, Percy Coverdale, and now co-owned by Nelson and his father John.