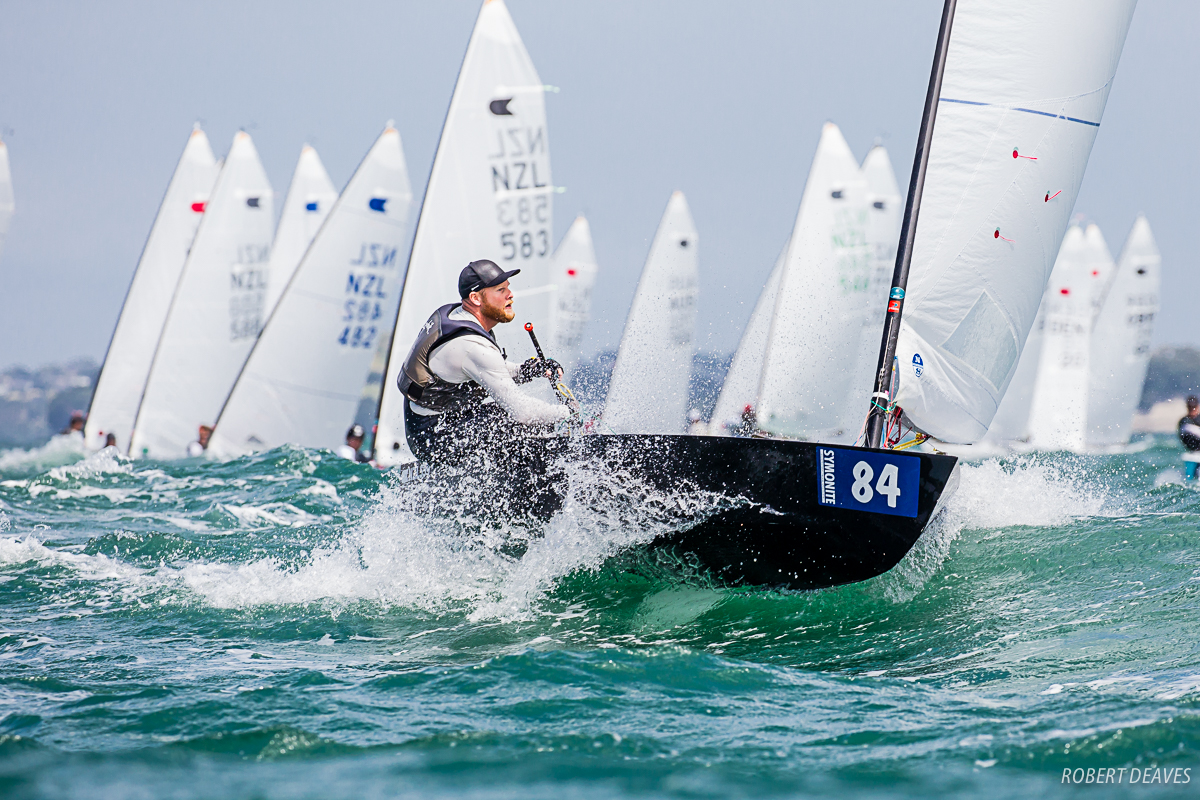 One hundred and eleven OK Dinghies from eight nations have gathered at Wakatere Boating Club in Auckland, New Zealand, to contest the 2019 Symonite OK Dinghy World Championship – and not only is it the largest-ever OK Dinghy event outside Europe, but also the first world championship held at the club.

After two days of registration and measurement, the practice race and opening ceremony on Saturday 9 February heralded the beginning of an event that has been six years in the planning. And what a day it turned out to be.

Wakatere Boating Club has left no stone unturned to try and stage the perfect event. It has been overwhelmed by the huge range of sponsors from local panel company Symonite, as headline sponsor, to countless minor sponsors providing after race beer and prizes. All this effort was rewarded by the huge turnout of sailors from around the world, with five containers of boats joining the strong local fleet.

Commodore, Simon Probert, said, “Wakatere Boating Club and its members are thrilled with the opportunity to run its first ever world championship. Ever since the idea was first discussed after the Interdominion Championship here in 2013 the excitement in the local OK fleet and the members has been huge.”

“The enthusiastic support of our committee, members and local community is a testament to the dedication and desire of the whole club to make this event a huge success. We are now looking forward to getting on with the racing.”

The hype around the regatta has seen the number of local OK Dinghy sailors almost double over the past few years, with around 40 boats now racing at the club.

A strong local fleet now includes an impressive array of top sailors, including three-time Olympian Dan Slater, double Olympic medallist Rod Davis, as well as multiple America’s Cup sailors, all of whom have been eagerly anticipating hosting sailors from around the world for the Championship.

The opening ceremony was held on Saturday evening. After an introduction by Commodore, Simon Probert, the local Iwi Ngati Whatua O Orakei performed a Powhiri, which is a formal Maori welcome accompanied by song.

The Championship was then officially opened by multiple Olympian and sailing administrator Ralph Roberts, who told the story about how the class was established in New Zealand in the 1960s, and how the camaraderie of the fleet, and the friendships between sailors helping each other, set it apart from many classes, as it still does today.

Earlier in the day, after a grey and sometimes inclement morning, the practice race started in a solid 15-16 knot easterly. Soon after the start, the clouds cleared and the sunshine returned, and it turned into a fabulous day on the water. With a swell up to 2 metres and wind increasing to 20 knots, it was a tough race, but left smiles from ear to ear.

Wakatere sailor, Mark Perrow led at the top mark from Dan Slater, also from the home club and Olympic medallist Fredrik Lööf, from Sweden. Both passed him down the fast and furious reaches, but then both headed for home to leave Perrow with a huge lead that he capitalised on to record a large win.

Former world champion Roger Blasse was some way back in second with Class President Mark Jackson in third, both from Australia.

Perrow: “It was a lovely day with awesome conditions, big waves and heaps of good guys. I was lucky to get the bullet after a few guys pulled out. I let a couple of Olympians through on the reach – Dan and Freddy. They were through me and off but pulled out on the second reach. I won, so that was good fun.”

He wasn’t worried by any bad luck surrounding winning the Practice Race. “I’ve seen the weather forecast for the week and thought I had better carry on and win the race as the rest of the week could be a bit dodgy.”

Junior participation has been a key motivator in lead up to the championship. Many young sailors at the championship have been gifted a free entry through sponsorship from the Victoria Cruising Club. It supports a range of youth sailing through grants and is one of the event’s major sponsors.

There are five juniors taking part including two girls. Olivia Christie normally sails a Laser Radial, and has Olympic ambitions, but couldn’t resist the opportunity to sail in such a huge high-profile fleet.

“I’m just here because it is a really big and very high level fleet and I wanted to get in some racing in a big fleet before going to Europe this year. It’s interesting not racing against very many other girls, but it’s always nice when you are beating a few guys.”

“Today was really fun, big waves and probably the windiest I have been out in the OK so far. I was generally in control, except when I capsized when I was fiddling around with the vang trying to figure out the sail settings. But I managed OK.”

“The fleet has been really, really helpful. I was surprised that everyone just mucked in to get me sailing with a fast rig. It’s been amazing.”

Racing for the 2019 Symonite OK Dinghy World Championship begins in earnest on Sunday. The weather forecast shows the possibility for some funky days ahead, to challenge one of the most competitive fleets to ever gather for an OK Dinghy world championship.