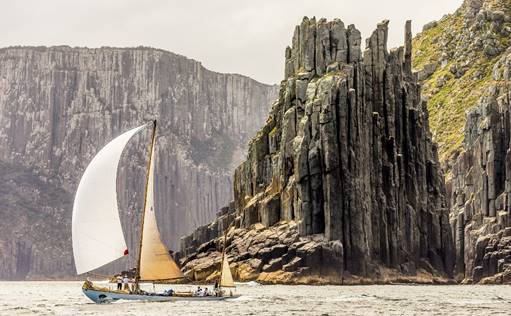 HOBART, AUSTRALIA (January 1, 2018) — The 86-year-old Sparkman & Stephens classic yacht Dorade finished second place in two divisions (IRC Division 4/ORCi Div 4), in the formidable Rolex Sydney Hobart Race last week. The 628-mile race, which started December 26, 2017, is often described as one of the most challenging ocean races in the world. It was the pinnacle event in the team’s ambitious six-race “Dorade Down Under” series, which kicked off this past August in Australia.

“We are very proud of the boat and the crew for their performance in this race, encouraging us for the next round of challenges, which will include more of the world's great ocean races,” said Dorade Co-Owner Pam Rorke Levy, adding that the yacht, originally launched in 1929, was the oldest boat in the fleet. “This race opens a new chapter for Dorade and the role we play as her custodians. Now we're not just repeating history but making history by taking on new challenges with an iconic and beloved boat.”

Dorade finished the race with an elapsed time of three days, six hours and 38 minutes. The team raced with eight crew onboard, including Sydney Hobart veteran Adrienne Cahalan as navigator.

“Many of the boats that compete and win the Sydney-Hobart are purpose-built for the conditions down here in the southern oceans,” said Skipper and Co-Owner Matt Brooks. “Dorade does best in flat water downwind, which isn't the Sydney-Hobart. We lucked out this year, to everyone's surprise, and had a downwind race, but the seas were anything but flat, and we were rocking and rolling so violently we finally took the spinnaker down.  All of us have longer arms now after driving the boat in those conditions.”