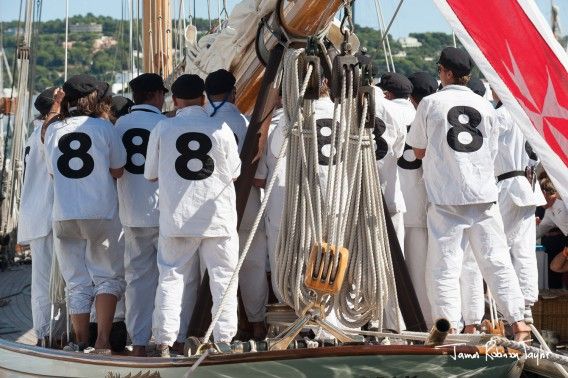 Today's strong winds forced the organizers to abandon racing, leaving them no choice but keep the boats safely moored in the Vieux Port of Cannes. Since the inception of the Régates Royales de Cannes, owners have always called up professional sailors. Once they were fishermen or seafaring shipmates, today they're Olympic athletes, America's Cup, IRC or one-design pro sailors. Tomorrow they will all join a tribute to much-missed female offshore legend Florence Arthaud.

A total change of scenario for the second day of the Régates Royales – Trophée Panerai. Despite showing they still have what it takes to sail in strong conditions, the 80 plus classic boats gathered in Cannes today could not face the violent westerly mistral that swept the Bay of La Napoule with gusts exceeding 30 knots, later suddenly shifting to the East and topping 35 knots.

The Régates are a must

The Règates Royales are not only a friendly and unique gathering, they are also a great opportunity to run across some world class sailors who feature regularly in some of the most renowned racing series worldwide and who for a week enjoy the pleasures of classic yachting.

“We come here to have fun. To sail with friends on beautiful boats. The race area is just stunning, the racing exciting as much as the atmosphere ashore. After many years sailing on multihulls, I've started sailing in the 8MI class, on Cutty and on Vision, and later on some 12Mi to finally go to classic yachts. I'm now with Moonbeam IV, I'm the strategist working with the tactician and I help with the sail trimming too. When Victor, the bowman, climbs up the mast I take over his role. It's super interesting for someone like me, who's essentially a trimmer,” says Gilles Mallet, former François Boucher's crew mate on the trimaran Ker Cadellac.

These magnificent boats, at times exceeding 50 metres in length, can have as many as 25 people on board, each with a specific role to work in synch with each other during manoeuvres that could take up to fifteen minutes.

“I've been sailing on Nada for several seasons now. She's a 6MI designed by William Fife III in 1929 and every year we take part in the class' World and European championships. It's great to mix with the Classics, it's a real show! But it's close racing too. I'm helming and it's not easy to steer these long-keeled boats, it's very different from helming a modern boat or a Figaro one-design. But the mix of competition and elegance is what makes the Régates Royales unique,” declares, smiling offshore expert Alexia Barrier.

Germany rules in the Dragons

After three races, the 38 boat strong Dragon fleet has a new leader, Germany's Michaël Schmidt with Mario Wagner and Stefan Waack (M3). With a third place on the opening day in light airs and a double win yesterday the German crew are in first place with five points, which is a fourteen point edge on UK's Ivan Bradbury (Blue Haze) who debuted with a clean score, but yesterday only got a disappointing fifth and a ninth.

British female skipper Gavia Wilkinson-Cox (Jerboa) was definitely more consistent (9, 3, 2) and is now in second position whilst Italian Giuseppe Duca (Cloud), who had a good start, only finished 29th and will have to rely on discards to get back in the battle for the podium. The “French armada”, consisting of ten teams out of 38, is having ups and downs on the overall scoreboard, with Jean-Pierre Gailes, Marc Nieuwbourg and Sébastien Decroix (Child’s Dream), being the best placed crew in 15th.

Hopefully the milder wind conditions expected for Thusday and Friday will enable the committee to launch at last four more races, opening up the game again despite the German team's strong margin.

A tribute to Flo, the oceans' queen

Tomorrow, the Régates Royales will pay tribute to one of the most loved, and missed, offshore female sailors of all times. Nobody, not even the most rugged sailors, resisted shedding tears upon hearing of Florence Arthaud's passing. Because she was fearless, passionate and represented the true love for the oceans. The ocean became her playground when she was 17, after a serious car accident that forced her to have a two-year-long rehabilitation.

Yet it was the 1978 single-handed transatlantic race La Route du Rhum that put Florence under the spotlight. She was one of the youngest participants and the second woman to race in this brand new offshore event. On X.Périmental, an aluminium Frioul 38', the young sailor who just turned 21, was on the starting line of a race soon to become legendary, that she finished in eleventh place.

Two years later, she entered the OSTAR on Miss Dubonnet, a Two-tonner designed by Paul Elvstrom, but had to abandon after dismasting. Later she's on the starting line of the La Baule-Dakar, of a double-handed transatlantic in 1981 together with François Boucher on former Kriter renamed Monsieur Meuble. Then it's the 1982 Route du Rhum, on Xavier Joubert's designed trimaran Biotherm. But the boat is not ready and she only finishes second behind the huge William Saurin…

At ease in strong conditions, Florence was invited by her close friend Alain Gabay to sail on the southern oceans legs of the the 1989-90 round-the-world race. The following year with Patrick Maurel she got a third place in the Twostar, closing in behind Jean Maurel-Michel Desjoyeaux and Mike Birch-Didier Munduteguy. In 1990 she decided to enter the Route du Rhum for the fourth time. She won the race, against all odds, and became a real star: the public loved her for showing that sailing is not only a male sport, but also for her direct, outspoken style, her support of the women's movement, her determination and her clear need for the freedom of the oceans.