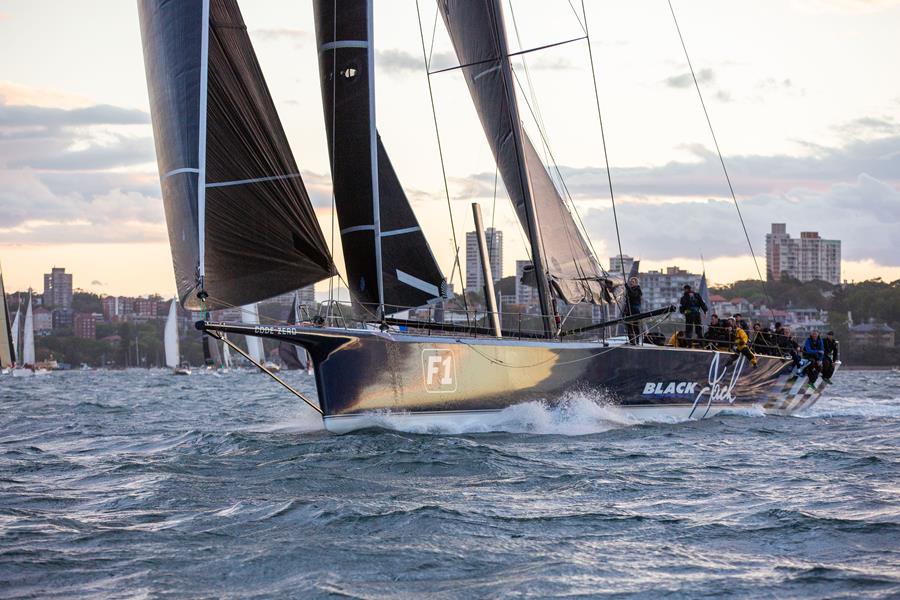 Black Jack led out of the Harbour - CYCA pic

The fleet put on a spectacular show for the multitude of spectators out to watch one of the largest edition of this race in its history, while the three super maxis achieved extreme speeds inside the Harbour.

Not much separated the three 100 footers as they exited the Harbour, though InfoTrack blew out its reaching spinnaker near Watson’s Bay while Wild Oats XI and Black Jack furled theirs at similar times. Wild Oats XI had a little difficulty of Watsons Bay, giving Black Jack the upper hand as the two led through Sydney Heads. The pair was followed by InfoTrack.

Gweilo, a TP52, was pulling well above her weight, sitting on the 100 footer's tails out of Sydney Harbour, almost sailing on her ear. Zen was not far behind, while the rest of the fleet had a show-stopping battle as spinnakers were hoisted and a few gybes completed.

The Reichel/Pugh 63, No Limit, got into all sorts of trouble when she lost her spinnaker off Watsons Bay and came close to running up the rocks.

The current race record of 12 hours, 12 minutes and 55 seconds, set by Wild Oats XI in 2012, looks to be under threat, as the fleet makes its way to the NSW mid-north coast. Though with two big-name retirements, in Wild Oats XI and InfoTrack, the record is in the hands of Peter Harburg and Black Jack,

Seven yachts have retired from the 180 nautical miles race so far, due to gear failure and sail damage; Wild Oats XI, InfoTrack, No Limit, About Time, XS Moment, Sticky and Carrera S.