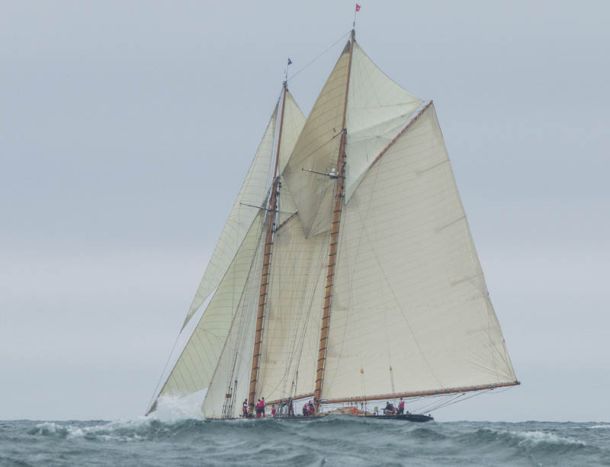 (Friday, July 3, 2015) –This morning at 03:46 EDT (07:46 UTC), Mariette of 1915 was first yacht in the 2015 Transatlantic Race fleet to pass the southeastern limit of the Ice Exclusion Zone surrounding the Grand Banks, south of Newfoundland. While the exclusion zone extends off to the northeast, the giant gaff schooner is now much freer to sail her preferred course toward the finish line at England’s Lizard Point. At 0700 EDT this was 1815 miles away.

While all the boats have been enjoying brisk southwesterlies, Mariette will hit a meteorological brick wall tonight: an area of high pressure (and light winds) to her east. However, this will be short lived with a fast-moving depression, forming off Nova Scotia today, causing strong southwesterlies to fill in once again. But this bodes well for the boats astern.

Third on the water, the British Oyster Lightwave 48, Scarlet Oyster, has attempted to unglue herself from her old rival Rives Potts’ Carina, skippered on this occasion by Rich du Moulin. While it was tempting to resume their long-standing match race, skipper Ross Applebey said that this would be their downfall as Carina carries a lower rating. So Scarlet Oyster speared north towards the Ice Exclusion Zone yesterday. Applebey said that they had experienced a solid 30 knots of wind. “We’ve had a storming 24 hours. We saw 17 knots of boat speed a couple of times.”

Chief conversation topic for the crews at present is the heat. While currently the race should be about icebergs and freezing fog amid shallow waters strewn with fishing boats, in fact it is currently shorts and T-shirt racing.  “We thought we’d be dodging icebergs now, but in fact it’s hotter than the ARC,” said Appleby referring to the Atlantic Rally for Cruisers, the transatlantic race which runs from the Canary Islands to the Caribbean island of St Lucia. “It is about 32°C (90°F) inside the boat at present.”

On board the Hinckley 51 Kiva, located some 260 miles due west of Scarlet Oyster, it was similar. “The water is 80°F (27°C),” said skipper Mark Stephens, “and we bought a whole lot of long underwear we’re not using.” The reason for this is partly the Ice Exclusion Zone, keeping the boats south of the south-bound Labrador Current, but also the Gulf Stream. If played right, the Gulf Stream can provide a boat-speed boost of up to three knots. A side effect of this giant river of water running north from the Caribbean is its balmy temperature. “I should be frozen, so I’m not complaining,” added Applebey.

On Kiva, Stephens said he was pleased to have escaped from the light winds that dogged their progress earlier this week. The breeze filled in on Wednesday and this morning they had 30 knots, although this was an estimate as their wind instruments had been blown off. “We are doing high 8s, low 9s and occasional 10s. We are digging ourselves out of the hole and we are after the leaders.”

Kiva, which heralds from the St. George River in Maine, is unashamedly a robust heavyweight cruiser, but in these prime conditions has been racking up 200 miles a day. As Stephens puts it: “That’s pretty good for this old girl. The boat is great. It is like sailing your living room couch!”

While other crews in the race are living on freeze-dried food, on Kiva they have fresh cooked meals. Last night it was shepherd’s pie and before that, pasta amatriciana and braised beef. “We are eating really high on the hog, living it large, although we have got some dried food in case it takes us longer to get there than anticipated,” said Stephens, for whom this is his first transatlantic crossing.

Thirty miles miles south of Kiva, Steve Berlack on the J/42 Arrowhead reported that they were sailing in 25- to 30-knot winds and that the boat and crew were holding up well. “We are only four men, all in our mid-50s and 60s and we are doing great. We have just had toast, eggs and coffee so we are not living too hard a life.”

Among Wednesday’s starters, the 100-foot maxi Nomad IV, chartered by Clarke Murphy, has covered around 410 miles over the last 24 hours. Less than 48 hours into her race, she is now picking off the first of the boats that started three days before her. However tenaciously keeping up with Nomad IV is pre-race handicap favourite, Bryon Ehrhart’s Reichel/Pugh 63 Lucky (previously the 2011 Rolex Sydney Hobart winner, Loki) which is taking a more northerly route.

Astern the Class 40s are keeping up well. This tightly clustered group is being led by Burkard Keese and Alexander Krause on Stella Nova. Onboard second-placed Toothface 2, Mike Dreese and Rob Windsor have recovered from a small drama, which ripped a hole in one of their ballast tanks.

Sadly, Sean Saslo’s 50-foot Brigand, competing in IRC Class 3, is the second retirement from the race. The boat is heading back to the United States due to what is believed to be a faulty watermaker.