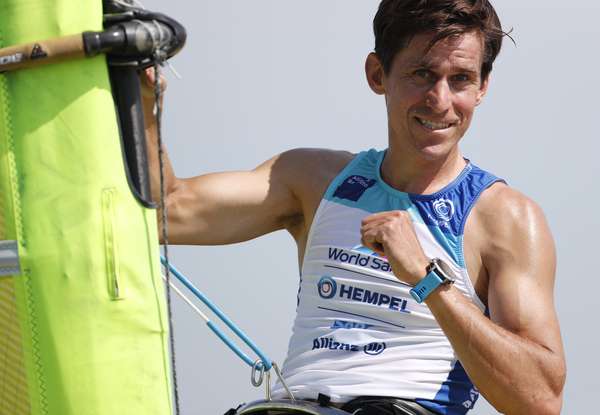 There was a sense of excitement in the air on the opening day of Hempel World Cup Series – Allianz Regatta in Medemblik, The Netherlands as sailors hit the water at the first World Cup event since Miami in January 2020.

It’s been a long wait for the sailors as they build up to the Tokyo 2020 Olympic Sailing Competition, but the precision and focus was there to see on the opening day as competitors raced in a fickle 3-7 knot northern breeze.

The ILCA 7 is the largest fleet in Medemblik with 60 world-class sailors taking to the start line. For the first two days of the competition the fleet will be split into yellow and blue for qualification so the battle for the gold fleet will be short and high-pressure.

Lorenzo Chiavarini (GBR) set the pace in the blue fleet with a sixth and a race win and leads overall. He is tied on seven points with yellow fleet front runner Filip Jurisic (CRO) who took a second and a fifth.

El Salvador’s Enrique Arathoon sailed consistently and is among the frontrunners. On his day he commented, “The winds were oscillating a lot. We had around 3 to 5 knots all day. The first race went well, I managed to finish third. In the second I fought hard and finished ninth. It was a very solid day for me.

“There are only two days of qualifiers so it’s important to start well. I’m happy and enjoying it. It’s such a nice feeling to be doing what I love and looking forward to preparing for the Olympics.”

The opportunity to race in a high-quality fleet is valued by all of the racers currently in Medemblik as it’s one of the final opportunities to do so before Tokyo 2020. This is not lost on Arathoon who added, “It’s a very strong fleet. Most of the people who are going to compete in the Olympics are here. In the laser fleet you have to fight for every metre from the start to the end. If you get distracted you can lose vital seconds. That’s something we need to train for constantly so when it comes to it, we’re fully focused.”

In the Men’s RS:X, Poland’s Piotr Myszka hit perfection in the light winds, using his physicality to win both of the day’s races.

Many of the leading lights in the Men’s RS:X are racing in Medemblik and a good performance will set the tone heading into the Olympic Games.

France’s Thomas Goyard will be a favourite for a medal at Tokyo 2020 and recognises the importance of racing amongst his Olympic rivals, “It’s really good competition,” expressed Goyard. “We are a strong fleet of 21 with many of the athletes who will be at the Games here.

“We had a long day of two races, one in the morning and one in the afternoon, with light wind. It was a very physical day and tactics were not easy at all. I’m happy so let’s see what happens.”

Goyard occupies fourth overall on 10 points with Myska leading the way on two, Tom Squires (GBR) in second on five and Mattia Camboni (ITA) on nine in third.

Freitas claimed the first race win of the day and backed it up with a fourth. De Geus put together a third and a second. Israel’s Katy Spychakov won the second race and is third after a fifth in race one.

As of 1800 UTC, Laila van der Meer and Bjarne Bouwer (NED) had claimed both Nacra 17 race wins and top the leaderboard.