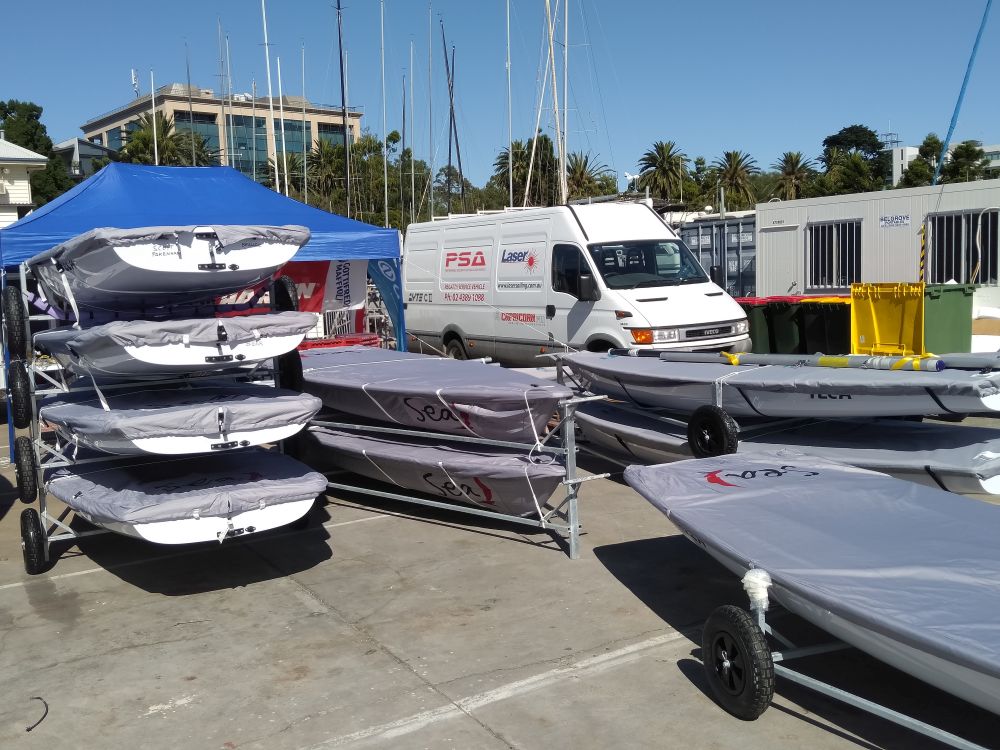 The PSA van at Royal Geelong Yacht Club for the Laser Masters.

We’ve all been there. You arrive at the regatta, go to rig your boat and find that you’ve left your bung/battens/cleat/sheet in the shed at home. Or you find there’s a nasty stone chip in your hull from the road trip to the venue.

If you’re sailing a Laser, there is no need to panic. Just go to the ever-present PSA van and ask for help.

PSA has a presence at every major regatta. For the massive Laser Summer of Sailing in Victoria, which included the Australian Championships, Sail Melbourne, the Standard and Radial World Championships and the ill-fated Laser Masters at Geelong, the PSA van has been on site since Boxing Day.

“We thought we might get a short break between regattas,” says PSA CEO Chris Caldecoat. “But because the sailors were training when they weren’t racing, we’ve had someone at Sandringham and Geelong the whole time.”

Chris optimistically entered the Australian Laser Championships at Sandringham in January, as a competitor but lasted only two days, before the onshore activities took over his time.

Chris says that at one point there were over 500 Lasers at Sandringham, as the world’s best brought their own boats to train in, then switched to the supplied equipment for the Worlds.

“Building, delivering and then maintaining that number of boats has certainly been an effort,” Chris says, “But it’s worth it to see so many Lasers in use at one time.”

Talking with competitors in the rigging area, it’s easy to see that they appreciate the service they are being given.

“I had a problem with one of the cleats, which is attached a bit differently here than in England,” said British Masters sailor, Glyn Purnell. “The chap from PSA came over and fitted it for me for nothing. I also found the bolt in my rudder was a bit tight. I could have walked up to the city, gone into Big W and bought a set of spanners, but PSA lent me a socket and the problem was fixed.”

Chris Caldecoat says the PSA van is there as a service, not a money-maker. “If someone needs a new sail or a new daggerboard, of course we’ll charge them for it. But we fix heaps of little gel coat chips for free and hand out spare bungs like lollies.”

The sailors show their appreciation in the usual way. “We’ve got a stash of beer back at the motel and the Thai team (at the Standard Worlds) gave us a very nice bottle of rum,” said Chris with a laugh.

When the regatta is over, the PSA staff are still working. Some of the charter boats from the Masters in Geelong were destined to be shipped to Italy, but will now probably end up in the USA or Canada.

“We’re shipping containers (there are 20 Lasers to a 40 ft container) to France, St Petersburg, Gran Canaria, Canada, the UK, USA… all over the world,” Chris says.

Unfortunately for PSA, the indefinite postponement of the World Masters has hit them hard in cancelled charter boat fees. They aim to amortise their charter operations across three regattas, so to lose a complete event makes a dent in the profits.

But the van will still be at all the major regattas. With next year’s Australian Championships scheduled for Perth, Chris and his team are gearing up for another road trip across the Nullarbor, towing a massive trailer loaded with Lasers.

“The Laser class is good for PSA. So we feel an obligation to be good to them in return,” Chris concludes.

For more information, go to www.psasailing.com.au.