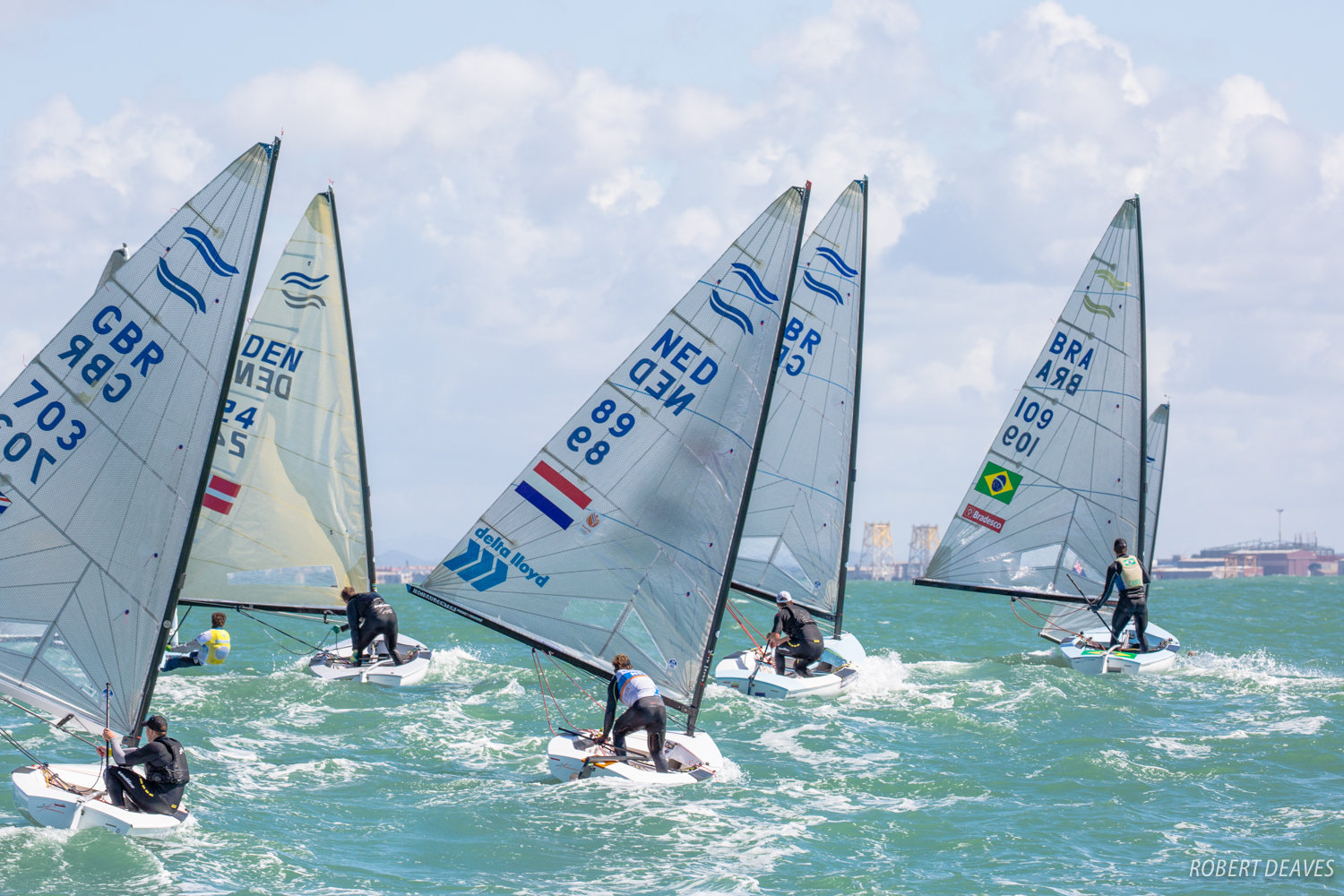 Both Nicholas Heiner, from the Netherlands, and Edward Wright, from Britain, are guaranteed medals at the Open and U23 Finn Europeans in Cadiz after the final day of the Opening Series on Friday.

Conditions were again exceptional, with Briton, Ben Cornish, winning another race, while Swedish world champion, Max Salminen, moved up to third, with just the Medal Race to sail.

In the U23 championship, Nils Theuninck, from Switzerland, returns to the lead, holding a one-point lead over defending champion Henry Wetherell, from Britain. Third placed Ondrej Teply, from Czech Republic, is 34 points adrift.

The day started with heavy rain, and then a postponement as the skies cleared and the sun made a welcome appearance. Three races were scheduled but after the late start, and then a delay in starting the first race, it meant that only one race was added to the scoresheet – the re-sail of the abandoned Race 8 from Thursday.

But the conditions were exceptional again with a great breeze, huge waves, some much needed sunshine and a spectacular roller coaster reach to the finish as 3-4 metre waves swept the fleet down to the line.

Getting underway in 12-14 knots, the fleet rounded the top mark pretty tight with Victor Gorostegui, of Spain, leading round from Deniss Karpak, of Estonia and Alican Kaynar, of Turkey. Karpak led at the gate but then it all changed again on the second upwind with USA’s Caleb Paine leading round from Nenad Bugarin, from Croatia and Tapio Nirkko, from Finland.

Cornish rounded fourth and passed all three downwind to record his third race win in a row. Paine crossed second with Bugarin third.

With the time limit set at 16.00, the race committee did a great job setting up fast and firing the first warning signal just after 15.45. However the fleet was too keen and two general recalls later, time had run out and the fleet was sent back to the harbour.

Cornish was philosophical about his win after the previous day’s race win had been scrubbed.

“It was nice to get out there and put right what went wrong yesterday. I was a bit disappointed that the race got thrown out yesterday. But it was nice to go out with a clear head and go and get another race win.”

He was about 20th round the first mark, but then, had “a good first downwind and I seemed to hit every shift up the second beat which gave me a good chance down the last run. I managed to slide my way down for the win.”

“It’s such a shame we didn’t get the last race in with such nice conditions. But as it comes to the end of the week everyone is desperate for something and just pushes harder and harder.”

Salminen also had mixed feelings about the abandoned race, where he placed sixth.

“It’s been an amazing last two days with really big waves and the sun finally came out with nice medium wind, and it’s been going good.”

“Yesterday we had some big rain clouds coming through that shifted things around a bit, but I am really happy with my speed and my performance overall. Then we had a little hairy second race yesterday that finally got kicked out and I placed sixth in that race, and that was bothering me last night. Then I came back today and actually scored better, at least compared to the guys around me on the scoreboard. So that feels really good.”

He placed seventh today and goes into the Medal Race in the bronze medal position, but he knows he still has a fight on his hands with four sailors capable of taking it away from him.

“It’s really pleasing to be up there. Unfortunately first and second is out of reach which is a shame but that didn’t happen today, that happened on the first two days. But I am pleased with my sailing towards the end.”

One of those who will challenge him in the Medal Race is the 2013 world champion, Jorge Zarif, from Brazil.

“I think this week has been a really good week. I had really bad starts but I played the right sides so I had consistent results, which has put me in sixth overall, and I hope I can do something well in the Medal Race tomorrow. I am really looking forward to it. I have to pass three guys but the maths is possible so let’s see.”

Nicholas Heiner has led from Day 1, and needs to be within two boats of Wright to secure his first Finn championship title.

He described the day, “Eventually the wind kicked in really quickly and it was another nice sailing day. It was really patchy for the first race and really tricky conditions. I didn’t have the speed upwind so I got buried a little bit, but luckily I had the speed downwind and I knew I had to put it down on the last run to secure points on Ed, who was in front of me, I was really happy to at least get one decent result in today and it’s all on tomorrow.”

But he won’t be happy with anything but gold.

“I have a five point lead and am guaranteed a medal, but I have been leading all week and we want to finish that way for sure. It’s another yacht race tomorrow and only ten boats and a massive forecast so I think it will be good fun and a lot of action.”

There will be two races going on inside the Medal Race. Gold and silver will go to Heiner or Wright, while five sailors are in the mix for the bronze. Seventh placed Cornish is only 13 points adrift and after his performance the last two days, who would write off a second Europeans bronze medal in a row.

The forecast is so bad for Saturday that the Medal Race has been brought forward to 09.30 in an attempt to get racing in before the wind really kicks in. Even then the forecast for 09.00 is for strong wind from 25-30 knots. The final race for the rest has been rescheduled for 10.30.

If the sailors get the chance to race it should be an awesome battle.