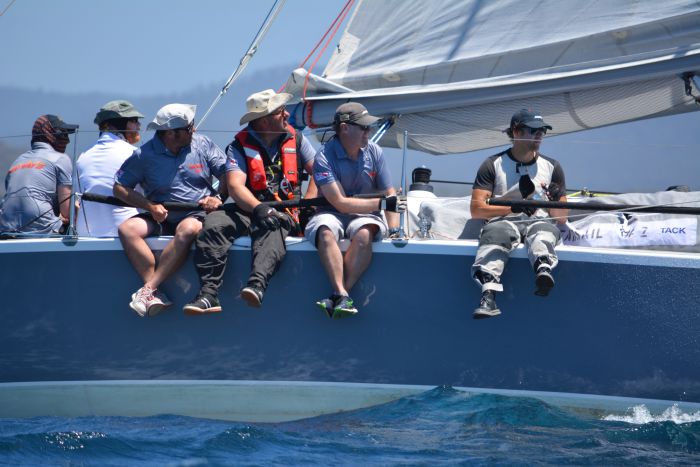 Hobart yachtsman Matthew Keal’s Mumm 36 Heatwave is heating up this year’s Launceston to Hobart yacht race as she chases down the current line honours front runners Gary Smith in Fork in the Road and Robert Green’s 50-footer Dream. Heatwave is currently sitting in third position for line honours and third on IRC. Heatwave made the transition well through Banks Strait by heading out to sea and picking up the early breeze on the East Coast.

Sailing in a 5-10kt north-easterly, Fork in the Road and Dream have pulled away from the rest of the fleet. Fork in the Road is now ahead of Dream and the first finishers are expected in Hobart around midday on 29 December 2019 if good weather conditions continue during the evening.

Overnight, a majority of the fleet was battling tide through Banks Strait and light conditions have seen many of the yachts being challenged to get around Eddystone Point during the morning. Andrew Sinclair’s Radford 14 Haphazard reported thick flog during the overnight sked, making visibility difficult.

Stephen McElwee’s Lawless and Stewart Geeves Footloose were within metres of each other, off Mussel Roe Bay, earlier today. The two previous Launceston to Hobart winners have ground to make up. Weather conditions are expected to bring the smaller boats down the coast fast during this evening.

Co-Race Director, Ron Bugg expects conditions to be unpredictable as the boats head to Hobart.  “If the back of the fleet can transition through Banks Strait they have an opportunity to catch up to the leaders, but coastal weather conditions are unpredictable at this stage,” said Bugg earlier today.

Tasman Island is the next challenge for the fleet as they progress down the East Coast. Tasman Island is forecast to have a south-westerly at approximately midnight which means the fleet will have a tight reach across Storm Bay to the Derwent River and then head up the river to the finish in Hobart.