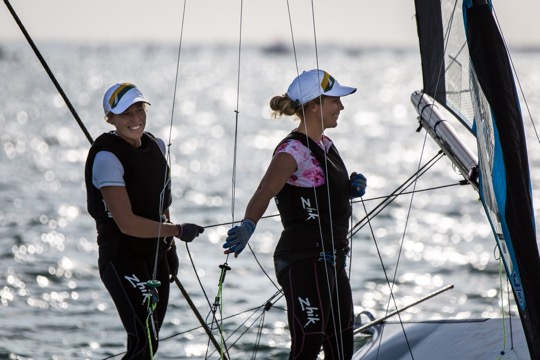 Wherever they are in the world, Australian sailors take a bit of their country with them – spiritually if not actually.

Heavily modelled on the television interviews of Western Force rugby player, Nick Cummins “The Honey Badger”, Haylee Outteridge and Nina Curtis sent this tongue-in-cheek message to their supporters from the World Cup in Miami, where they are currently the leading Australian team in the 49erFX competition:

G'Day World. Coming to you from the land of the free and home of the brave.

We started the day gay as a handbag full of rainbows, ready for a cracker on Strayaday.

The breeze was up and down like a dunny seat. Unfortunately, we were as useful as tits on a bull at getting off the line but once we got going we were off like a like a bride's nightie.

We were as mad a cut snake cos the shifts made as much sense as a nun at a rock concert and we had more on than a one-armed bricklayer.

The top mark was as tight as a chook's bum and the girls were carrying on like pork chops but we made good gains going round like a rissole and took off downwind like a rat up a drainpipe. The whole ordeal had Nina sweating like a gypsy with a mortgage…

However, on the last beat of the day, there was a glimmer of hope on the horizon and Haylee picked it like a dirty nose. As we crossed the finish, we were as happy as a dog with two tails.

Currently in 11th overall, long way to go yet, but we're mad as a meat axe and we're gonna finish it like a cheesecake!

But for now, get me home, get me a beer.