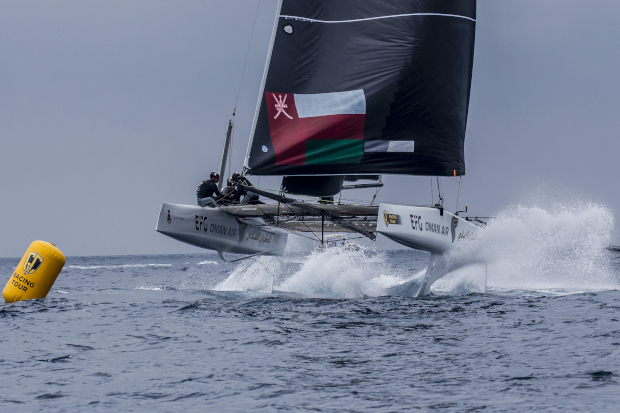 On one hand it was a miserable day of intermittent rain, a chilly wind and an overcast sky like a scene from the North Sea in February – on the other, despite the fickle conditions, all scheduled five races were held.

Squalls, holes in the wind, the works, but maestro Principal Race Officer Stuart Childerley defied the forecast. As Villasimius came good, he succeeded in keeping racing on schedule in a variety of conditions, enabling much good foiling. It caused considerable re-arrangement of the leaderboard.

There were two star performers of the day. Oman Air returned to the Marina di Villasimius this afternoon having pulled out an eight point lead. However while the Omani team, led by new skipper Adam Minoprio succeeded in scoring 10 points today, Alinghi was close behind on 11.

While Alinghi showed unparalleled consistency, they won only one race compared with Oman Air’s three. Nonetheless the Swiss team’s performance today was enough to elevate them to second overall, leapfrogging both Norauto and INEOS Rebels UK.

To make up the schedule, the first warning signal was moved forwards by 1hr30 and the competitors arrived on the race course with the wind from a strange northerly offshore direction, and 10-15 knots, but feeling stronger in the rain.

In this the first reaching start of the season was held. This high octane affair saw Código Rojo Racing and Norauto over early and it was the day’s two star performers that led into the reaching mark.

The two, plus Red Bull Sailing Team, extended away and by the second beat Alinghi had pulled out a mighty lead, only to fall into a hole towards the top of the beat. This was enough for Oman Air to get the inside berth at the final top mark and lead down the reach to the finish.

With the wind dropping the race team was forced to move the entire race area around to upwind starts. But where?

After moving out of the bay, they eventually returned to the centre of the bay as the wind veered towards due east. After almost two hours of angst waiting, the wind miraculously filled in and remained in a just true enough direction and speed to enable more four more races to be sailed.

However, the wind was still doing strange things. As Oman Air skipper Adam Minoprio observed: “We were getting 60° shifts. No race was the same as the previous one, so you constantly had to be on your toes.” At times the centre of the course was a no-go zone and the right was favoured upwind and down where the pressure could be ‘linked up’.

In the first of these races, Oman Air started on port, led out to the right and, despite a strong challenge from Erik Maris’ Zoulou, went on to win the race.

For race three it was the turn of INEOS Rebels UK to lead at the top mark however at the leeward gate she went left as Alinghi split right, causing the Swiss to finish ahead, the British team relegated to third. Finally in race four Ben Ainslie returned to form, as the INEOS Rebels UK led around the top mark and this time clung on.

As Ainslie subsequently observed: “Today we had some ups and downs. We made small mistakes here and there but it’s good to get back into the racing and that’s why we are here for.” The difference today? ‘Getting clean air’. “It sounds obvious, but having the boats together, you sail pretty slow.”

For the final race it was the turn of Red Bull Sailing Team, of Austrian two time Tornado Gold medallists Roman Hagara and Hans-Peter Steinacher, to lead around the top mark. However they opted for left on the run (generally not favoured today) when Oman Air went right and once again this led her to come out on top.

Of their near miss, Red Bull Sailing Team’s young Australian bowman Mark Spearman countered with “our worst result today was a fifth, so we were usually at the front if not right at the very front.” Spearman who sailed with INEOS Rebels UK last season reckoned that in today’s challenging, damp conditions “it was all about the mode changes.”

Reflecting on Oman Sail’s success today, mainsail trimmer Pete Greenhalgh said: “We had our heads around what you needed to do to get a good first beat. We were fairly aggressive in terms of how we positioned ourselves and what we were aiming for.”

The varied wind speed caused them to swap frequently between jib and gennaker upwind and Greenhalgh they had lacked speed under the former.

He praised Stuart Childerley for getting in five races. “It was pretty top drawer today. He is patient and sensible – he abandons races they fold inside out. It is all good on that front.”

Tomorrow the first warning signal has again been brought forward to 1130 and the forecast indicates that the forecast will be more of the same.

Full results and all information: http://www.gc32racingtour.com/results/