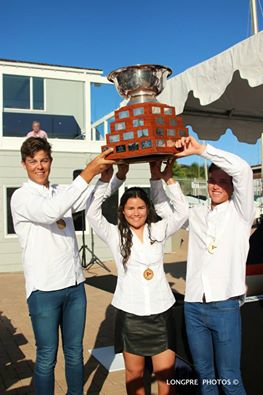 Harry Price, Angus Williams and Tara Blanc-Ramos, from the Cruising Yacht Club of Australia on the east side of Australia, defeated Lachy Gilmour, from Royal Freshwater Bay Yacht Club from Western Australia in a battle of the Aussies.

CYCA had quietly worked their way up the ranks in their first Gov Cup. The first day of racing, CYCA won four races, losing only to Chris Weis of Del Rey Yacht Club. On Wednesday, they lost only to Scott Sinks of San Diego Yacht Club. After finishing the first round robin, they were one of five teams tied with eight wins. The others were BYC, RFBYC, RSrnYC, and Del Rey YC.

On Wednesday, the team from Royal Southern Yacht Club, led by Annabel Voss from the UK, had beaten the BYC team, the first loss for host team. However, on Thursday, in the next series of races, RSrnYC was less successful and was knocked out of the Semi-Finals. Both finalists were new to the Gov Cup but experienced in match racing, so that experience paid off.

In the very close Semi-Finals between BYC and Price, Killian had two wins and one loss after Friday. However, on Saturday, Harry was able to win the next two races which put CYCA in the finals against the team from the other side of Australia. In the lighter air, which Harry had said he preferred, CYCA chose the side of the course which had more wind. In unusual tactics for Match Racing, the boats did not stay together.

Gilmour, in first place at the start of the semi-finals, had chosen to race Chris Weis from Del Rey Yacht Club first. RFBYC started Saturday with two wins, while Chris had only one. Gilmour was able to win the next race as well, which put CYCA and RFBYC in the finals.

Price and Gilmour traded blows in the first two races, but then it was all nineteen-year-old Price as his team won the next two races to take the championship 3 to 1. In the Petit Final, Killian beat Weis 2 to 0, repeating his third place finish in 2014. – See more at:

For the fifth thru eighth place teams, Fry defeated Vose for #5 and Thompson lost to Sinks for #7. Since their matches were complete, the racers were able to watch the tactics of the top teams. A few went out with their coaches to continue practicing for future events.

A special bonus for the spectators on the water was the audio coverage on Friday and Saturday by two men who really know sailing. BYC’s Andy Rose was joined by Tom Ehman, who has been involved with many America’s Cups. Currently he is preparing for the San Francisco Yacht Racing Challenge to be held in 2016. It will be raced in a new class to be known as Super 12’s. He hopes that the return to mono-hulls will make the event really special. The banter between the two, their accurate reports about the tactics and conditions, as well as their interviews with the racers were great to hear.

The teams that finished in the bottom four were also able to watch the racing from spectator boats on Saturday. When there were breaks in the racing many of the younger spectators were able to swim. After their final race, Annabel Vose and her team mates from England enjoyed diving off of Paul Blank’s beautiful boat, PROMOTION, the 38’ platform for the play by play Tweets that Paul and Stacie Brandt wrote during the week.Not only did Paul host and drive his Spectator boat, he also went out on one of the support boats to drag some kelp off the race course. In addition, he hosted the team from England for a week.

All of the visiting teams were able to stay with families of members and supporters. Paul will be chairing the 2016 50th Gov Cup with Tom Purcell, who is the son of the founders of the Gov Cup, Chet and Glee Purcell. Chet presented the Purcell trophy to the Chicago Yacht Club winners of the Purcell Sportsmanship trophy, Will Curtiss, Rose Edwards and Wade Wagner. They were chosen by vote of the racers and the umpires – quite an honor.

When the racers returned to Balboa Yacht Club, the winning team was towed in by the Race Committee boat and met at the entrance of the harbor by the Harbor Department boat, spraying water in an arch before them. The winners dove in the water as part of the traditions. They had also jumped in the water just after finishing the final race, leaving the boat to be rescued by one of the many support team members.

It was another beautiful but steamy day in Southern California. The few clouds that there were in the morning disappeared. The winds were lighter than earlier in the week, starting about 6 knots, and not growing much stronger. There were some swells later in the day with light chop.

This was the last year BYC will use the Gov Cup 21 boats that were designed and used for this purpose since 2003. The designer, Alan Andrews, has designed a new and improved Gov Cup 22. Alan, a long-time member of Balboa Yacht Club, has designed many high performance racing and cruising yachts. The new boats are on order and will be ready for the 50th Annual Gov Cup in 2016.