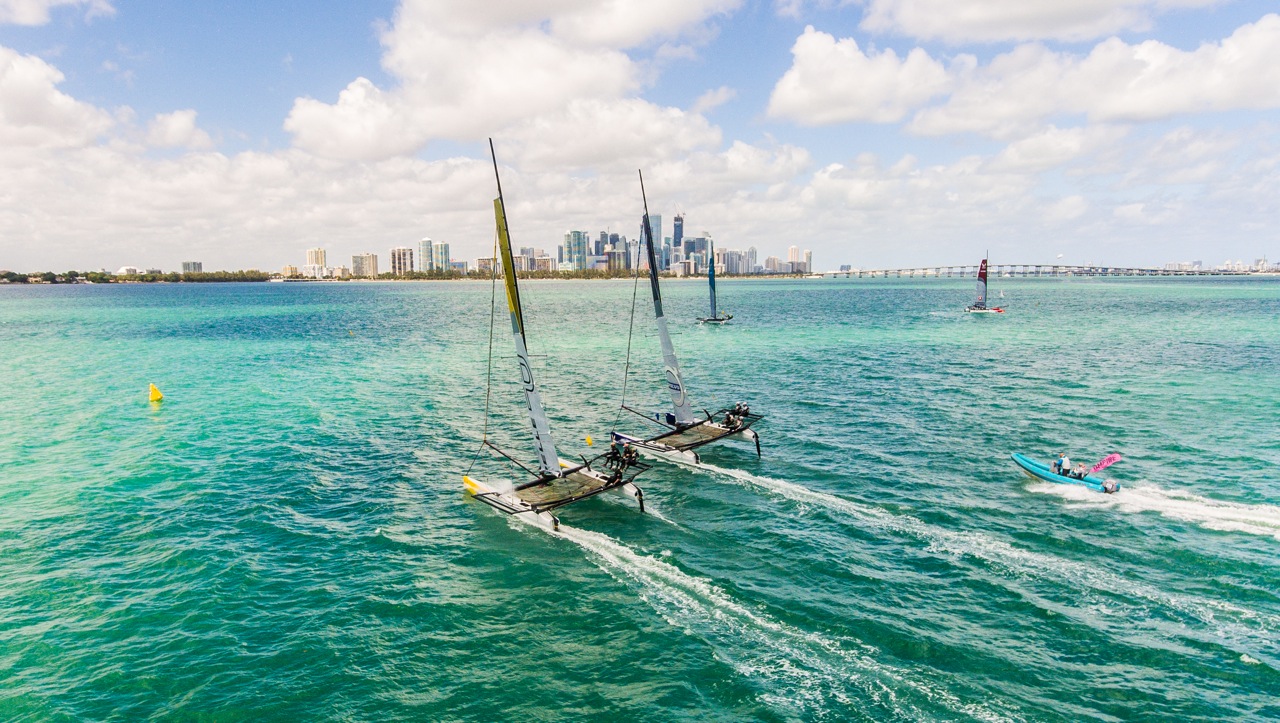 At times today the young Australian looked to be struggling. After leading the qualifying session during the first two regatta days, today Price had a series of losses at the end of the qualifying series, but kept his calm when it mattered to sweep through the knockout stages and clinch the title. It was American Nevin Snow that Price took in the final, however both finalists earn a ticket to World Match Racing Tour Championship level event, Match Cup Sweden.

Harry Price with his Sydney based Down Under Racing is one of the more experienced teams at this event with it being their 3rd WMRT qualifier in the M32 catamaran so it was expected that he do well, however his 12-1 score at one time during qualifying shocked all. After dropping races through several unforced errors he lost his precious place on top of the leaderboard and gave the semifinal pick to Nevin Snow.

When Snow picked fellow USA countryman Markus Edegran, Price was left to battle his semifinal against fellow Sydney sailor Evan Walker and his Team KA Match. In this first to 3-point series Walker convincingly took the first. In the second match Walker won the start and was ahead again. As the pair came down the second run the gap closed with each cross. Coming in towards the bottom gate Price owned the starboard advantage but still trailed, just. Without flinching Walker continued to the gate on port tack to cross his opponent’s bow. With a heavy last minute flick of the tiller Price sold the penalty and Walker was forced to slow, giving the win to Down Under Racing.

In the other semifinal, Nevin Snow’s 13FIFTY Racing dominated in a 2-0 win over E11EVEN Racing. Markus Edegran was the surprise of the regatta with this being his rookie entry to the professional match racing circuit. He looked strong in the early parts of the day, but couldn’t keep the winning rhythm when the pressure turned on for the knockout rounds.

With the finalists decided, so too were the invitations to the World Match Racing Tour Championship level event, Match Cup Sweden. Both Price and Snow will be heading to the Swedish sailing hotspot of Marstrand in July for the next Championship stage event on the Tour.

Due to time limitations, the race committee called the final to be a sudden death, single race match-up. Price was dominant in the prestart, nailing time back to the line and leading to the reach mark. The match was decided there and then with Snow never convincingly closing the gap.

Both Down Under Racing and 13 FIFTY Racing have looked dominant this week and neither will be an easy match come July when we get to Sweden. “The opponent I am most looking forward to facing is Taylor Canfield.” Commented Snow, previewing the event. “We’ve faced off several times but we’ve never beaten him. Perhaps in the M32 and in a new arena we will get the chance to get one or two back.”

Price is also looking forward to the next level challenge and remarked, “We’re ready to step it up in in Marstrand. We’re pretty happy with the performance here so want to keep this flow going and see how we fair against the big boys.” Both will now look to get more experience in the M32 over the coming months to ensure they are prepared for the event.