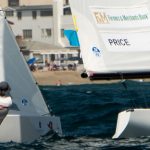 Newport Beach, California: On the third day of the 51st Governor’s Cup, it seemed like someone finally beat Harry Price on the waters off Newport Beach – his perfect run with his Cruising Yacht Club of Australia crew appeared over on Thursday – but was it?

It looked as though the lone all-female crew in the fleet of 12 took down Price, World Sailing’s No. 6-ranked skipper in open match racing. Skipper Clare Costanzo and crew of Jessica Angus, Emma May and Hannah Lanz led Australia’s Royal Prince Alfred Yacht Club to an exciting finish, believing they defeated Cruising Yacht Club of Australia and ended Price’s 16-match winning streak in round-robin action.

There was an issue with the race. The umpires ruled that Royal Prince Alfred Yacht Club did not clear its penalty, which was at the pre-start, before the finish. The foursome couldn’t believe it.

The result in the oldest youth match racing regatta didn’t stop Price’s Cruising Yacht Club of Australia from becoming the first of two boats to clinch a berth into Friday’s semi-finals.

Cruising Yacht Club of Australia went 5-1 on the third day, reaching the semi-finals under Price for the third year in a row. Host Balboa Yacht Club also finished 5-1 on Thursday and made the semis for the fourth straight year with Christophe Killian as its skipper.

With three round-robin races left, Cruising Yacht Club of Australia is in first place with an 18-1 record and Balboa Yacht Club is in second at 16-3.

Round-robin racing begins near the Balboa Pier at noon on Friday, and the semi-finals will follow.

Price hopes to reach Saturday’s finale for the second time in three years, while Killian wants to make it to the championship for the first time. It has been 37 years since the Balboa Yacht Club has won the Governor’s Cup. Price won it two years ago.

Balboa Yacht Club had two entries in the competition for the first time. While one of its boats is in contention with Killian, Harrison Vandervort and Jack Martin, the youngest crew of David Wood, Max Brennan and Catherine Reynolds is 6-13.

Wood, the skipper, Brennan and Reynolds have a bright future, evident from almost defeating the top two contenders, Price, 21, and Killian, 20, during the first two days. Wood and Brennan are both 16 years old, and Reynolds is 17.

“We’ve got to meet a ton of new people and kind of experience a whole new level of sailing,” said Wood, who last month led his crew to the U.S. Youth Match Racing Championship for the Rose Cup in Fort Worth, Texas. “The competition is a lot older [at the Governor’s Cup]. It’s up to 23 [years of age]. The level of sailing has completely increased.”