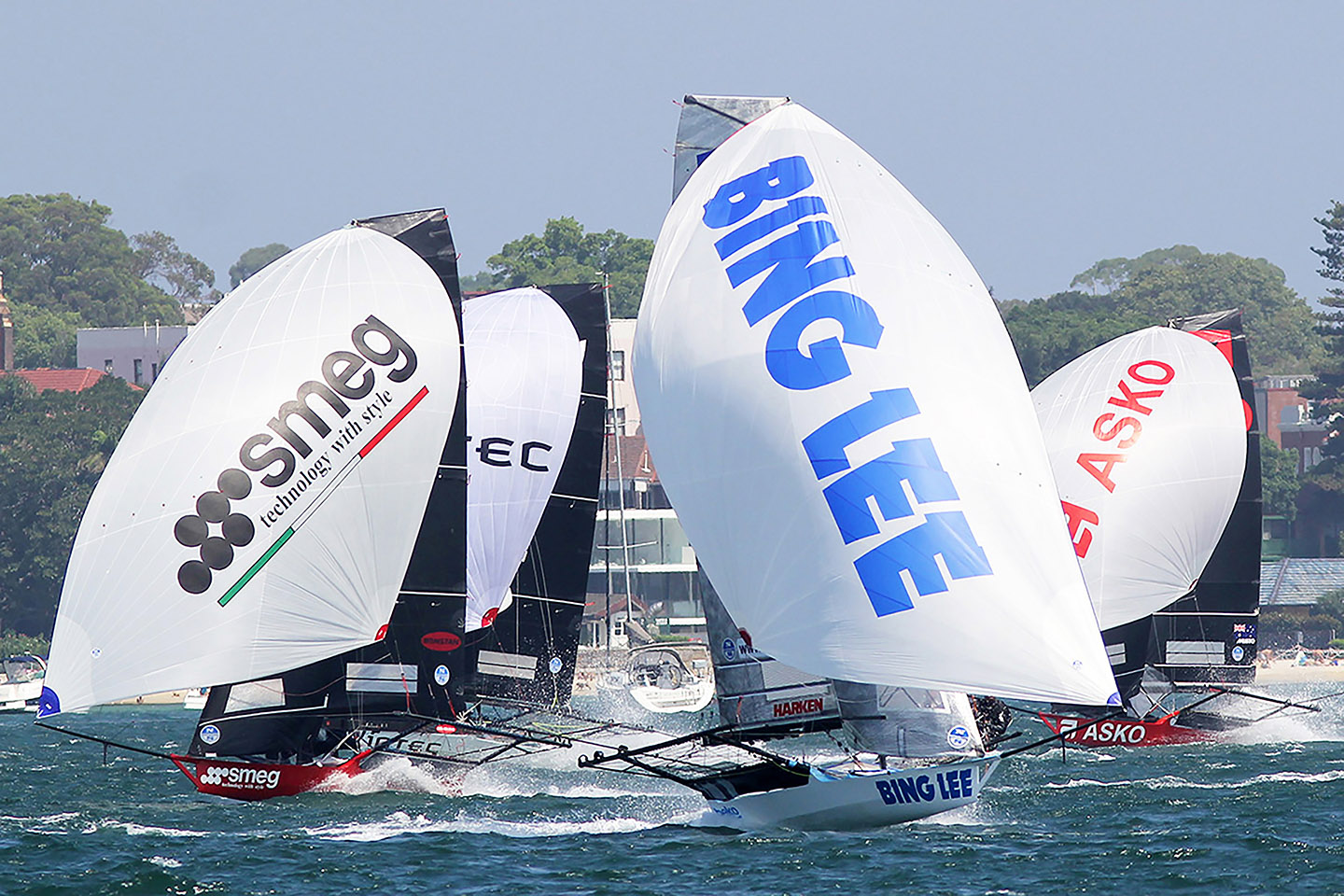 Two brothers winning JJ Giltinan world 18ft Skiff Championships is not too rare. There have been at least ten ‘brothers’ winning boats in the 71 championships held so far, but the Harris brothers have a rare distinction with their victories.

The two brothers won their respective championship titles in different boats, and not together.  John Harris won his championship as skipper of Rag & Famish Hotel in 2001.  Peter Harris won his championship in the bow of Gotta Love It 7 in 2013. The story began in 1996 when John was introduced to the 18s by Craig Ferris, who was the Sailing Coach for the 2000 Olympics, after John had recently experienced a bad trip across Europe as part of his preparation for the games.

Craig had previously won the 1996 JJ Giltinan world Championship with Stephen Quigley and Chris Cleary in AEI-Pace Express and had been approached by the Australian 18 Footers League to run an 18ft Skiff campaign when Stephen Quigley retired before the 1996-1997 Season. Craig recalls, “It started out when I was asked by John Harris and Lee Knapton to coach them for their 2000 Olympic campaign in the 470 class, and I agreed as it was a privilege to work with such talented sailors.”

“During the final year for selection in the Olympic team, they headed to Europe to compete in regattas as part of the selection process.  They had a boat built in Australia and sent it overseas for the regattas, but unfortunately, after it left, we found out that it was made from a non-approved resin and had other measurement issues. I organised for them to pick up a charter boat but they were too young to hire a car so a friend sold them a car.  Unfortunately, when that caught on fire, and had to be repaired once they arrived, they missed a regatta while dealing with logistical issues. I left Australia earlier to go and help them, we got everything together, and they were sailing extremely well in the first part of the selection regatta.”

Craig said, “The gasket fell off the boat during a day of 2x races as we tried to repair it on the water, to no avail. Then the mast came out of the gate and twisted in three different directions.  After straightening it overnight, and getting it back together, I saw they were still strong minded, and business like, to take every opportunity if it presented itself, even after all that had happened. Unfortunately, the final disaster put them out of the gold fleet and out of contention.  Naturally, they were fairly dejected at the end and it seemed a crime not to have these talented sailors in our sport. Back home, I organised Lee to steer a 16ft skiff and he proved his ability when he continued on and won national championships.”

The Australian 18 Footers League were well aware of Craig’s ability as a skipper and approached him to put a campaign together to race with its 1996-1997 fleet. According to Craig, “After I was offered a new boat, I asked John to come on board and steer the boat, and I would be on the sheet with Chris Cleary up front. The plan was, I would crew for a while until I got too slow or old, then maybe go back to skippering.  That plan went well aside when John showed his talent and the combination was working well.”

John Harris had already shown enough ability on the water, and character off the water, to convince the League that he was exactly the type of person to become a skipper the club’s fleet. Like a number of other 18 footer champions, John started sailing in Sabots at Vaucluse Amateur 12′ Sailing Club, at age 7, then moved into Flying Elevens at 12. According to John, “At 17, whilst still in High School, I got the opportunity to sail with Michael Spies on Winfield Racing as the mainsheet hand for the 1993-1994 season.  I sailed with Spies for 1.5 seasons then went and did some match racing, including placing second in the Youth Match Racing championships in NZ, which were like an unofficial world champs for junior match racing.”

“Around that time I also started crewing on a 470, with Lee Knapton.  We were young and inexperienced but ended up finishing second in the 1996 Olympic trials after racing in North America and Europe (behind Tom King who went on to win Gold in Sydney 2000). During those couple of years I did some fill-in sailing on the 18’s, including the second half of the 1996 JJs, then the rest of the season with Jack Young – I was on board when we thought we had won but were disqualified for being over the start line. It was after our 470 campaign ended that Craig asked if I would like to steer a new 18 the following season, with him on the sheet and Chris “Rissole” Cleary in the bow.  It was an amazing opportunity, and a brave call from Craig!  I had been crewing in 18s and 470s for the last 4 years but helming an 18 was a big step.”

“For my first season I had the defending JJ Gilitnan Championship-winning crew and a brand new skiff, Tyrrell’s Wines – great place to start!”  That first year, we finished third in the JJs, behind Trevor Barnabas, a legend of the sport! and Brad Gibson.  The following year we were second, behind Trevor Barnabas. We got a new boat the following season, but had a bunch of problems with it and didn’t get great results.  Then for 2000, we took over the Rag & Famish Hotel boat and got another third in the JJs. When we got a new Rag & Famish Hotel boat for the 2000-2001 season, everything came together – the regatta came down to the last race between us, Smeg (Trevor Barnabas) and John Winning’s defending champion AMP Centrepoint team.”

“There was a moderate NE and we were pretty quick in those conditions.  We got in front of Trevor at the bottom of the second lap and then covered for the final lap. It was fantastic to win with Craig and Rissole after 5 years of being close, and for our sponsor, George Calligeros, who was one of the best supporters I, and the 18s, ever had.”

In 2005, John became Commodore of the Australian 18 Footers League then from 2006 he teamed up with Scott Babbage and his brother Peter Harris, and sailed together for the next five seasons until 2010.  John said, “During that time I also started sailing Moths and managed to win the 2008 World Championships, in Weymouth UK. At the end of the 2009-2010 season, I decided to take a year off the 18s and focus on Moths for a season, and finished 6th in the Worlds that year at Belmont. I got a career opportunity to move to Chicago, where I have been living since, but excited to finally relocate to Sydney in December!”

Craig Ferris’s judgement was vindicated and Craig reaped the reward, “Winning the JJ Giltinan Championship as well as several top three finishes over the years, showed how talented John was and I think I was just pleased to be able to help and contribute in some way and to be able to sail with very good sailors having fun and being successful at the same time. Looking back, it all turned out very well and I am glad to have been a small part of it and I would be happy to do it all again.”

Peter Harris came to the 18s in 2002-03, after competing in the Sabot and Flying 11s (mainly) out of the Vaucluse Amateur 12ft Sailing Club, when he teamed with Micah Lane and Chris Pomfret on the Rosement Wines-sponsored skiff. He then competed over the next four seasons with skipper John Sweeny before moving onto Rag & Famish Hotel with his brother John, and Scott Babbage, for the following three seasons, from 2007-2008 to 2009-2010.  Following a season with Dave Gilmore on Black Swan, Peter joined Jack Macartney on Rag & Famish Hotel in 2011-2012 and sailed a total of five seasons with Jack until the 2016-2017 season. The only season when Peter wasn’t a part of that team was 2012-2013 when he sailed in the bow of Gotta Love It 7 with Seve Jarvin (skipper) and Scott Babbage, on the main sheet. The team won the 2013 JJ Giltinan world Championship and Peter recalls, “it was a great thrill to win the JJ’s after ten years of trying, and to win the event with two great mates Seve and Scott made it extra special and more enjoyable.”

“I had done plenty of sailing with both of them over the years and grew up sailing out of the VA12SC with Seve Jarvin. We watched the 18’s every weekend while we were growing up, and we always wanted to sail them. Winning the ultimate prize was very special, and winning the last race in that 30+ knot NE breeze was a great way to win the JJ’s.“I was on edge for the entire race.  That was the ultimate 18 foot skiff racing!”

When Howie Hamlin was forced to retire from the 18s, due to health reasons, Peter took over the boat and raced it in 2018-2019 under the Bing Lee sponsorship, which he arranged.

“As the General Manager of Bing Lee, I thought it was a great opportunity to give a little back to the class, and sponsor the boat.  It was very enjoyable to do another season with Micah and Scott, and we had some great results but, with no preparation, we couldn’t find the consistency required to be a major threat at the JJ’s.”

Peter is having some time off from racing 18’s right now but says the prospect of his brother, John returning to Australia, after living in Chicago for many years, “may reignite our passion to try and win the JJ’s together in the not too distant future…”

If the two Harris brothers get back together again on an 18ft Skiff they may still win a Giltinan world 18ft Skiff Championship – together!