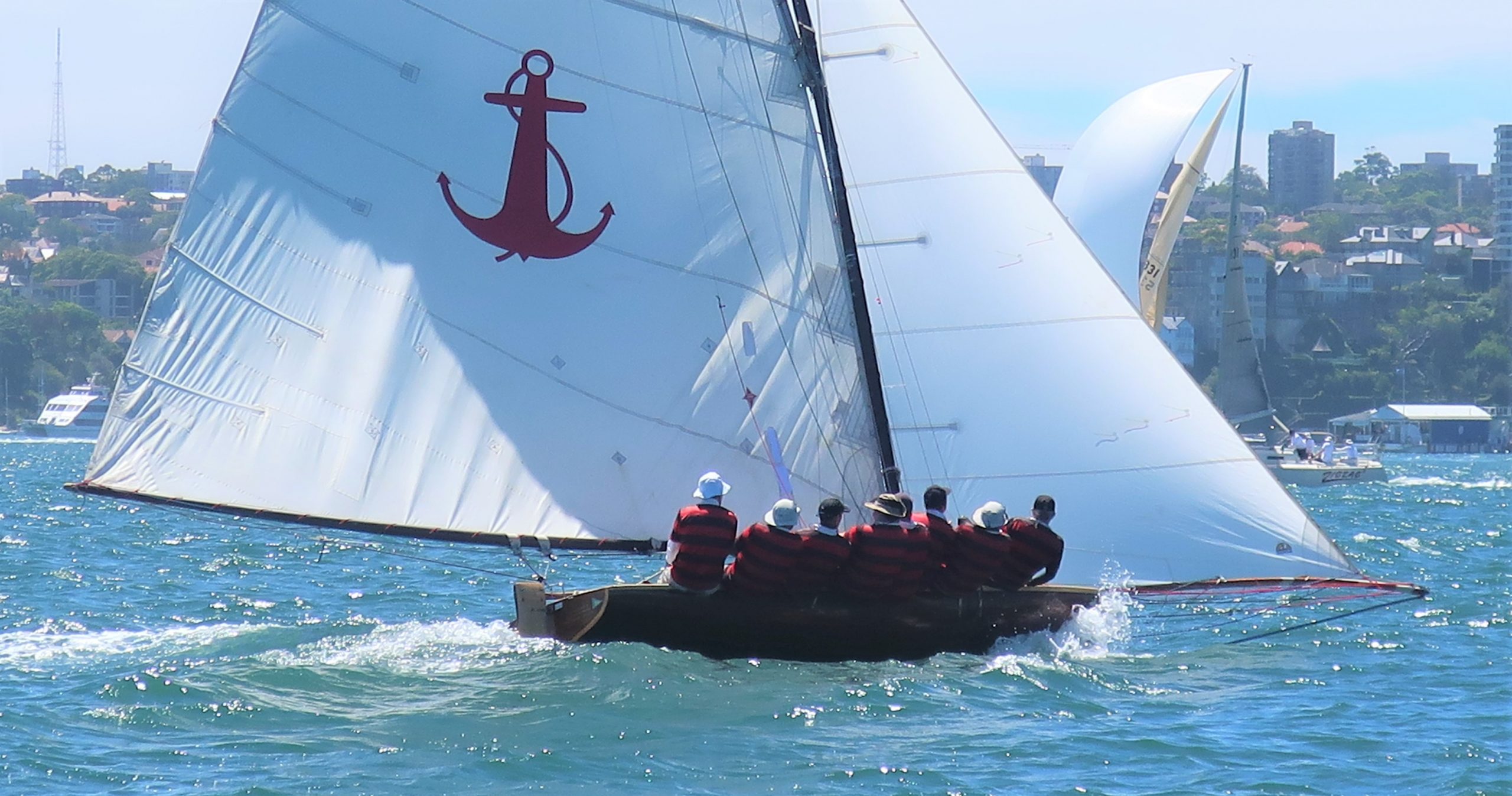 Evergreen Irishman and international yachtsman of renown Harold Cudmore at the helm of Yendys completed the 3 race series for the 2018 Historical 18-foot Skiff Australian Championship on 4 pts to take a narrow win from Aberdare skippered by John Winning / Michael Chapman on 5 pts, with 3rd place to Britannia skippered by Ian Smith on 12 pts.  Cudmore has been a regular and welcome competitor at this event over the past two decades, finishing runner-up on numerous occasions, so it is with some well-earned satisfaction that he has at last achieved his quest for this elusive title.

The 2018 Historic 18 Footer Australian Championship for the Galloping Ghost Trophy was conducted by the Sydney Flying Squadron in conjunction with the Australian Historical Sailing Skiff Association (AHSSA), on Sydney Harbour over 3 races in January – Sat 20, Thu 25 and Sat 27.

The series developed into a two boat contest between Yendys and Aberdare, with Yendys’ dominant windward performance under big rig the foundation for 2 emphatic race wins to seal the series.   Yendys was skippered by evergreen Irishman Harold Cudmore, with the regular crew under the guidance of Andrew Buckland to finish the series on 4 pts.   Aberdare, skippered by John Winning for races 1 & 2 and Michael Chapman for Race3, placed 2nd on 5 pts, while Britannia, Ian Smith, sailed a consistent series to take 3rd place overall on 12 pts.

All 3 races were sailed on the club’s NE Course in moderate and variable NE / ENE gradient winds under low cloud in hot and humid conditions.   Yendys carried a big rig in all races when most other skiffs opted for full size no.2 rigs.   In Race 1, the NE breeze filled-in during the second half of the race allowing Aberdare to move into the lead to score a convincing win.   Race 2 began in similar conditions to Race 1, but then lightened off considerably with Yendys streaking away to a huge lead to win on a shortened course.    Race3 also started in similar conditions but with variations in strength and direction on the first long beat before settling in, with Yendys building an early lead for a comfortable all the way win.     Meanwhile, the racing for the minor placings, particularly in Race 3, was always hotly contested.

Cudmore has been a regular and welcome competitor at this event over the past 2 decades, finishing runner-up on numerous occasions, whilst also suffering the pain and frustration on other occasions that goes with racing these complex and un-forgiving craft, so it is with some well-earned satisfaction that he has succeeded in his quest for this elusive title to add to his many international achievements.