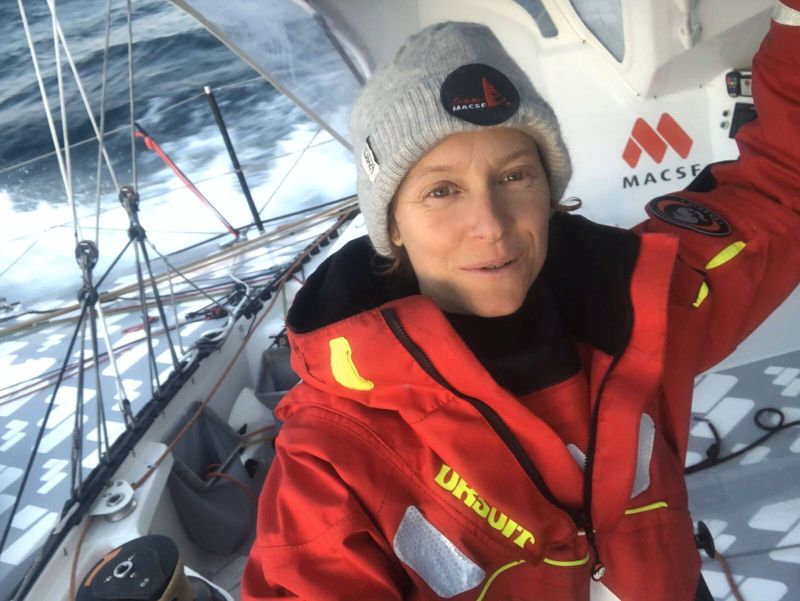 The Franco-German skipper Isabelle Joschke has been forced to abandon her Vendée Globe on the 62nd day of racing after a further failure of the keel canting system on board her IMOCA MACSF.

Joschke was lying in 11th place racing in difficult conditions, in 30-35 knots of wind in the South Atlantic some 1100 miles east of the Argentinian coast.

During the late afternoon today Saturday 9th January Joschke realised that the hydraulic cylinder which was holding her keel centred had failed. After the main keel canting system failed on January 3rd she had been sailing with the keel centred, held in place by this replacement ram. But the keel is no longer held centred. She immediately lowered the mainsail and was sailing under storm jib to keep the boat as stable as possible.

Alain Gautier, MACSF team manager, explained, “Isabelle is currently taking stock of the situation. She has reduced speed completely to minimise the effect of the waves and to make sure water doesn't get into the boat. The first problem is that she is sailing in the direction of the depression and conditions will deteriorate overnight.

“Tomorrow a shift in the wind direction should allow her to escape to the north-east to escape this low pressure, and flatter seas should make things easier. It is obvious that Isabelle can no longer continue with her Vendée Globe and will have to retire. We are in constant contact and are studying the various options with her for the next few days.”

On Sunday January 3, the of the hydraulic keel cylinder ram became detached from the keel head so Joschke could no longer cant the keel. A false cylinder was put in place which fixed the keel in the vertical position and it was this cylinder which has now broken.

On the 1800hrs ranking Isabelle Joschke was in In 11th position, the first woman in this Vendée Globe fleet. She was having a remarkable race, going well In the main ‘peloton’ after dealing with each and every one of several technical problems. She has shown great determination and mental strength but this evening she is devastated to have to pull out of the race when she had sailed 21,224 miles of the race course and had just 5853 nautical miles to sail to the Les Sables d’Olonne finish line.

British skipper Pip Hare kept her Vendée Globe on course when she replaced her damaged port rudder on Medallia yesterday evening, completing the difficult operation in the South Pacific Ocean some 1000 miles west of Cape Horn.

Having discovered a crack in the shaft of her rudder, the 45-year-old had no alternative but to stop her IMOCA 60, drop out the damaged rudder and ship the spare in 20 knots of wind and a big Pacific swell.

Hare may have lost two places, dropping to 17th, but the English solo racer who is on her first time ever in the Southern Ocean, has kept her race alive and – if she maintains the same pace as today – she should reach Cape Horn and deliverance from the south on Monday afternoon or evening.

“Every part of my body aches. I have bloody knuckles on every finger, bruises all down my legs and muscles I didn't know I had that hurt but YES!!!!! The new rudder is in and Medallia is back in the game.

“Yesterday I was scared and apprehensive. The conditions were far from ideal, a big swell and a forecast for a light patch between gales. I talked through the procedure with Joff and with Paul, the main concern was slowing the boat down enough to get the rudder in and then the boat landing on the rudder stock and doing damage to neither. Eventually, with a drogue out of the back and under bare poles in 16-18 knots of breeze, I went for it”.

She noted this morning, “I think the whole procedure took about an hour-and-a-half with many hours of preparation and packing up before and after. My heart was in my mouth for the whole time. I ran around the cockpit, winding winches, pulling ropes, sliding over the to the back of the boat to grab, yank, manhandle, rudder ropes and anchor chain. Once I was committed to doing it there was nothing that was going to get in my way.

“There were some tough moments and I had to plead with my boat and the ocean a couple of times but when that new rudder stock finally came shooting up through the deck level bearing the out-loud whooping that came from me could easily have been heard for miles around… if anyone had been there to hear it.”

In an emotional exchange this afternoon with Swiss ace Bernard Stamm who built Medallia as Superbigou 20 years ago and won two solo round the world races on her, he told her, “You are my hero. What you did is incredible. I hope you have no more problems before you finish back in Les Sables d’Olonne.”

Hare was making 14.5 to 15 knots this Friday afternoon with some 900 miles to Cape Horn.